US$32
US$21
View deal
SAVE US$11
FindHotelUS$32
eDreamsUS$22
Expedia.com
View all 13 deals
Prices are provided by our partners, and reflect nightly room rates, including all taxes and fees known to our partners. Please see our partners for more details.
Payments made by partners impact the order of prices displayed. Room types may vary.
bronwynr741
Surfers Paradise, Australia
1516

Lifts weren’t working at the time so had to haul our packs and suitcases up 6 levels.
Guy on reception could speak some English which was good. Rooms had plenty of space with a good size king bed. Showers were cold.
Overall was a good hotel for price paid

Trip type: Travelled with family
See all 47 reviews
Payments made by partners impact the order of prices displayed. Room types may vary.
Nearby Hotels 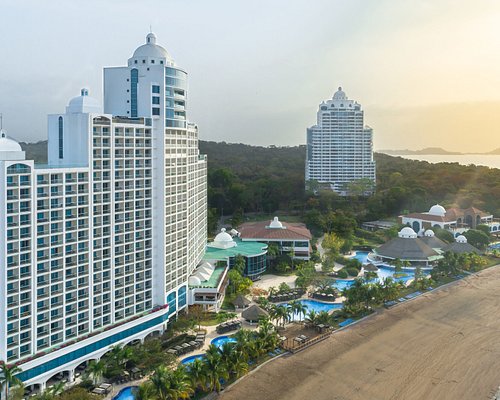 Hotels.com
View deal
Free cancellation
Pay up to 12X
Booking.com
US$83
Trip.com
US$82
StayForLong
US$111
View all 15 deals from US$82
775 reviews
3.4 km from Hotel Republica
We compared the lowest prices from 15 websites
All Inclusive
Riande Aeropuerto
US$120

Taking safety measures
We compared the lowest prices from 16 websites
Crowne Plaza Panama Airport
US$132
US$106
Booking.com
View deal
Free cancellation
Reserve now, pay at stay
Hotels.com
US$106
Expedia.com
US$106
StayForLong
US$132
View all 20 deals from US$105
851 reviews
20.2 km from Hotel Republica

I don’t even know where to start
Good things: Staff was friendly and helpful
Things that I didn’t like: Even though it is technically close to attractions (walking distance from Casco Viejo and Cinta Costera) the place where this hotel is located doesn’t necessarily look safe. The hotel is under construction so that means they are improving however the state in which the room where I stayed was deplorable. It smelled weird, bathroom looked filthy, curtains were dirty and appliances and closet old - I was supposed to stay 2 nights and I left early the following morning. Also by the way they say they’ll serve a continental breakfast and all I got was eggs, bread and coffee -

This review is the subjective opinion of a TripAdvisor member and not of TripAdvisor LLC
skuff-13
Miami, Florida
1317
Reviewed 1 November 2018 via mobile
You better catch Ebola than sleep here

Horrible is just not enough to describe this place i have to stay in Panama 2 nights but for the second one i prefer to sleep in the streets and not come back in this place.
Dirty , noisy , dirty , dirty , dirty ,
NO NO for people with any kind of allergy because dust everywhere.
In the middle of prostitution houses you can imagine the surrounding.
No restaurant, no elevator, room fridge not working, 70% of lighting not working , bathroom in filthy condition whit faucets not working ,filthy walls , tv from 1918.

This review is the subjective opinion of a TripAdvisor member and not of TripAdvisor LLC
Jennifer N
2
Reviewed 24 September 2018 via mobile
When there for 1 night. gross! The elevator doesnt work the stairs are a danger.. cockroach en the bed The breakfast 😑

They have the nerve to charge more than 40 dls for that disgusting place.
I fell i need 10 baths after being there ugh there is not 1 good thing to say.
I paid the breakfast but if the bedroom is disgusting i can imagine the kitchen.

This review is the subjective opinion of a TripAdvisor member and not of TripAdvisor LLC
Colin H
Manchester, United Kingdom
156191
Reviewed 14 February 2017
A convenient and reasonably-priced base for getting to know Panama City

It is fair to say that previous reviews of this hotel have been mixed, to put it mildly. I stayed at the Stanford for seven nights in January 2017, booking online and paying a total of around 250 GBP, inclusive of breakfast. I thought that this represented pretty good value for money, as Panama City is not the cheapest of destinations and hotels in the Casco Viejo (Old Town) - the UNESCO World Heritage listed site which is the most interesting and attractive part of Panama City - tend to be much more expensive. On balance, I enjoyed my stay at the Stanford and found that the positives outweighed the negatives.

On arrival, I was allocated the best room in the hotel: the penthouse suite on the sixth floor. I'm not entirely sure if this was the room I'd booked or whether I was given an upgrade, but I was generally happy with my room. It had no fewer than five windows, which meant it was bright and airy. The views of the city were absolutely superb and definitely the best thing about the hotel. My bed was large and comfortable, although I suspect some guests might have found it a bit on the hard side. There was an excellent small fridge, a large flat screen TV and plenty of space for hanging clothes. The adjoining bathroom, with a 'walk-in' shower was spacious and satisfactory, although the water never really got hot. This, however, was not really an issue, with outside temperatures in the low 30s. The room and bathroom were adequately cleaned every day,

There were, however, a few negatives about the room. Internet connectivity was generally OK, but it took a very long time to upload and download items. The air conditioner in the suite was old and very noisy, although in fairness it was very effective. There were also a couple of ceiling fans, though they were less effective. Thicker curtains would have made having an afternoon nap easier. Sound-proofing could also have been improved in order to block out noise from the busy square below (the Plaza 5 de Mayo).

One major plus: I found the staff on the reception desk, most of whom spoke good English, very pleasant and helpful.

As far as the breakfasts were concerned, the food on offer was minimally adequate. The coffee, however, was completely tasteless - no more than hot liquid.

As mentioned above, the Stanford is located on a busy square, on the far side of which is a handy metro station. From there it is only one stop to the main 'bus station (Albrook), where there is also a vast shopping mall. I was advised that it was quite safe walking along the pedestrianised Avenida Central to the Casco Viejo before 2000, as it is crowded with shoppers and there are lots of security personnel on duty. After 2000, however, it is much quieter and darker and therefore less safe: on one side of the avenida is an area called Santa Ana, which I was told is very dodgy. Not a place where tourists would feel comfortable or particularly welcome.

Unfortunately, there are no decent cafes, bars or restaurants close to the hotel - just fast food joints. The nearest decent ones are in the Casco Viejo, best reached by taxi in the evening.

Basically, the Stanford is a hotel that has seen better days and is in urgent need of refurbishment. The public areas are really very shabby. I could not spot any other hotels nearby, which suggests that this is not a touristy part of town, something that might well appeal to some visitors. I personally did not mind that, as there was no shortage of 'local colour'. I would certainly stay at the Stanford again, provided that I could have the penthouse suite for more or less the same price that I paid. I did not see inside any of the other rooms, so have no idea what they are like. I am relieved that my experience of staying here was not as awful or as memorable (for all the wrong reasons) as it clearly was for other reviewers.

This review is the subjective opinion of a TripAdvisor member and not of TripAdvisor LLC
metirac
New York City, New York
2635
Reviewed 11 February 2017 via mobile
Good budget hotel with good location

The hotel is kind of in the middle of the new town and old town but close to old town better. The walking distance is around 15-20 mins and easy to walk. It's right in front of plaza 5 de mayo. If you get lost walking back to the hotel , just say 'cinco de mayo' and people will be able to tell you directions.

Transportation: I took the bus from airport and it costed only $2 maybe(can't remember exactly sorry). You actually has to get a pre paid bus card in order to take a bus to the subway but there is nothing available for me to buy so I got help from the local to take another bus without it. Again you just keep saying 'cinco de mayo' and you will get off to the right place and be able to walk to the hotel. On the way back I tried to go by bus(direct bus to airport) too but it took to long to wait and I had no idea when it's coming so I gave up and took an uber($27). If you wanna go by bus, just make sure you have enough time to wait. The bus takes only 30mins ride but I didn't know the schedule. I also used uber to go to Miraflores lock($5). There is also wifi at the lock so you can be able to use it to call uber on the way back.

The neighborhood is very very local but safe to walk around. I walked back from old town to the hotel like 8pm and still fine. Look scary if you feel insecure to be in local non touristy area but if a solo woman like me can survive, you can do it too. There are local restaurants, street vendor foods and grocery stores around so easy to have cheap food. If you look for the luxury, business area hotel, this is 'Not' the place.

The room is cozy, big and comfortable. The ac is working great but I didn't have warm water. Since I'm from tropical country and live in NYC, I understand both sides that you don't need hot shower in hot weather but somehow once you get used to taking warm shower this will suck. It wasn't that super cold water tho but still I minus one star just for that.

All in all, you get what you paid for. Don't expect 5 star service or luxury room with business rich neighborhood area. It's very local. Still loud and lots of people walking on the street at 4 o clock in the morning but good location to walk to old town which is pretty much all the actions are over there.