Excellent if you want a hotel close to... - Review of CityBlue Creekside Hotel & Suites.

US$69
View deal
Free cancellation until 28/05/22
TravelocityUS$69
Trip.comUS$73
HurbUS$111
View all 15 deals
Payments made by partners impact the order of prices displayed. Room types may vary.
Prices are provided by our partners, and reflect nightly room rates, including all taxes and fees known to our partners. Please see our partners for more details.
verisko
Mombasa, Kenya
1327

Excellent if you want a hotel close to the city centre and with a swimming pool.

A quiet and comfortable hotel. I enjoyed the swimming pool very much. There is a pool bar which, unfortunately, ran out of ice so I restricted myself to one cocktail only. Staff was friendly. A good breakfast with a lot of choice of Western as well as African food. They also have a small gym downstairs, although you need to pick a key from the reception to enter. There is a safe in the room, which was very handy, as I traveled on my own and did not want to carry my money or valuables with me. The room was huge! And I enjoyed the view from the balcony.

The area is a bit tricky. There is a big street market just round the corner but no restaurants within a walking distance as such. I have visited the Rockwall restaurant on my first evening, which is a 20-minute walk and it seems to be the nearest place. Otherwise, a taxi or a tuk-tuk is needed to venture further out (which is not a problem, there were always plenty of tuk-tuks to flag down and it's 15 minutes to Mombasa town centre). The hotel itself has a restaurant, I had my dinner there one evening and it was OK as well.

The drain in the bathroom was blocked and the air conditioning was very noisy. Make sure you check your hot water before you accept the room.More

Show less
See all 327 reviews
Payments made by partners impact the order of prices displayed. Room types may vary.
Nearby Hotels 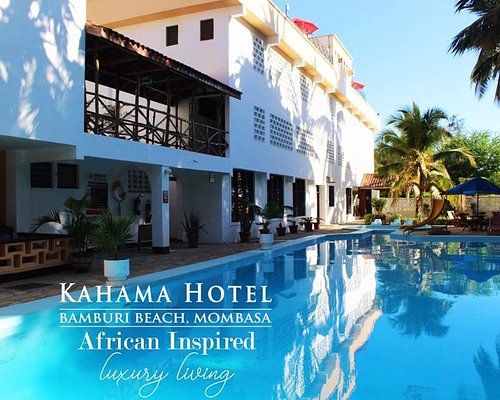 Best Western Plus Creekside Hotel
US$66 Hotels.com
View deal
Orbitz.com
Priceline
US$78
Expedia.com
US$80
View all 9 deals from US$78
196 reviews
11.7 km from CityBlue Creekside Hotel & Suites.

Priceline
View deal
Hotels.com
US$67
Trip.com
US$61
ZenHotels.com
US$67
View all 13 deals from US$61
290 reviews
3.7 km from CityBlue Creekside Hotel & Suites.
We compared the lowest prices from 13 websites
Kahama Hotel Mombasa
US$70

Expedia.com
View deal
Free cancellation
Pay up to 12X
Hotels.com
US$70
Travelocity
US$70
Orbitz.com
US$70
View all 11 deals from US$70
202 reviews
9.2 km from CityBlue Creekside Hotel & Suites.
We compared the lowest prices from 11 websites
Dan Park Hotel & Apartments
US$75

The staff are great especially the receptionist. However the room next door had insanely loud music that going on in their room, the rooms being wall paper thin we couldn’t sleep. We complained and called the reception several times but nothing helped. Breakfast was disappointing no salt or pepper shakers on the tables, no tissue/ serviettes. I understand they were busy during the festive season but I found the restaurant very disorganized with their staff. When you enter the parking there isn’t a sign that tells you where to go it’s sort of a guess as to where you need to go. What makes this place is the reception staff they are wonderful.

This review is the subjective opinion of a Tripadvisor member and not of TripAdvisor LLC.
MrsSultanaT
2
Reviewed 25 November 2019
Wonderful Hotel

Loved the spacious and clean rooms, with a great view that compensated the lack of access to the beach.

The staff were very helpful and friendly, especially the operations manager, Siraj. They made our brief stay very comfortable.
Will definitely be going back.

This review is the subjective opinion of a Tripadvisor member and not of TripAdvisor LLC.
zurich_allan
Paisley, United Kingdom
617
Reviewed 18 November 2019 via mobile
Nice stay at CityBlue Creekside Hotel

My colleague and I have just returned home after spending 5 nights at the Cityblue Creekside hotel, and on the whole a great place to stay. We were delivering a training course at Mount Kenya University nearby, so needed somewhere good to stay for a few days.

First thing to mention, the staff. All were brilliant, very friendly, very efficient, and couldn't do enough for you. A credit to the hotel.

The rooms are spacious, clean and with plenty of storage and hanging space for clothes if you are staying for a number of days. Air conditioning was very good in my room at least (I've seen some other reviews saying theirs didn't work well, but so complaints from me, it was perfect!). Incidentally, we had originally booked for garden view rooms, when I meant to book creek view ones, and when I emailed and asked about changing, the staff did it immediately and at no cost. Big thumbs up!

The pool is the cleanest I have every used in Africa, and I've stayed in a lot of hotels in Kenya, Rwanda and elsewhere over the past few years. The water was nice and warm too. Excellent job.

Breakfast was great, a good selection, and egg station for omelettes etc. to order.

There were a couple of minor issues while we stayed. The WiFi cut off for the hotel twice during the week, each time for several hours at a time, so it wasn't just that it was off and had to be re-set. This could have been a problem if needing the internet to work. Secondly, three times I went to change currency at the reception and was told I couldn't as they didn't have money to change - I found this very strange, most hotels globally have a set level of float to keep in the front desk tills, and if low they top up from a central safe to ensure that there is always a cash supply if needed, this seemed quite amateurish. Third, the bar ran out of Tusker at one point, and also they didn't have a single bottle of red wine that was on the a la carte menu, with only one other bottle of red wine available, no explanation was given why nothing was in stock, maybe some training in stocktaking and ordering is required? Finally, the oven broke while we were there at one point meaning of that the majority of the a la carte menu was unavailable - the buffet was a little limited (one choice of meat) which meant wasn't great.

These negative points though aren't really that bad, and certainly didn't spoil the stay, which as I've said was in general excellent. Would definitely stay again, and provided some pictures below.

This review is the subjective opinion of a Tripadvisor member and not of TripAdvisor LLC.
remonbloemberg
Arnhem, The Netherlands
41
Reviewed 9 November 2019 via mobile
Nice room and well situated pool

The hotel has a good location although they are building a huge hotel right next to this one which doesn’t look that pretty. The room is nice and comfortable. The staff is friendly. The breakfast is basic but sufficient.

This review is the subjective opinion of a Tripadvisor member and not of TripAdvisor LLC.
Nana O
71
Reviewed 13 October 2019
Warm and cozy...

Situated by the ocean, the hotel is set up beautifully. The staff are professional, amiable and courteous. The rooms have a great view of the sea. The food is excellent. Looking forward to going back.