US$46
Free cancellation until 30/04/21
Reserve now, pay at stay
View deal
Booking.comUS$46
eDreamsUS$46
TripadvisorUS$46
FindHotel
Agoda.comUS$46
Trip.com
View all 14 deals
Prices are provided by our partners, and reflect nightly room rates, including all taxes and fees known to our partners. Please see our partners for more details.
Payments made by partners impact the order of prices displayed. Room types may vary.
yipfc
Singapore, Singapore
4

The plus points: it is just a 3 minutes walk from the JETT Abdali bus station, so it is very convenient if you are catching the JETT bus (the bus to Petra starts at 6.30am). The staff was friendly and helpful, if you inform them that you are getting on the 6.30am bus, they will set out the breakfast at 6am. The room was clean and spacious. The bathroom was clean and spacious. And the air-con and WiFi worked perfectly. The breakfast provided was adequate and rather delicious. The downside: the room shows a bit of age, with some wear and tear around the edges of furniture. The room was rather spartan. The towel provided could benefit from a bleach. (why can't they provide coloured towel?). The TV set seems to be at least 20 years old and barely working.More

Show less
Room tip: Ask for early breakfast if you are catching an early bus
See all 53 reviews
Payments made by partners impact the order of prices displayed. Room types may vary.
Nearby Hotels 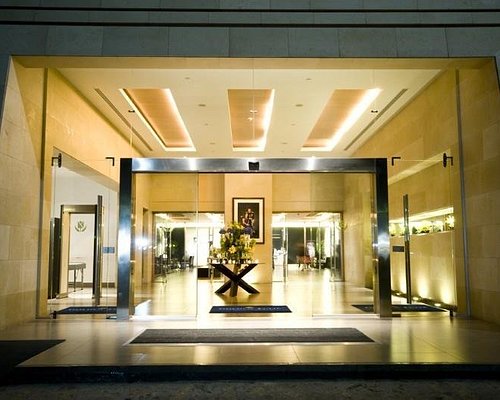 Breakfast included
Amman Airport Hotel
US$192
US$168
Tripadvisor
View deal
eDreams
Travelocity
Destinia.com
US$192
View all 16 deals from US$168
735 reviews
28.1 km from 7Boys Hotel
We compared the lowest prices from 16 websites

Expedia.com
View deal
Free cancellation
Pay up to 12X
eDreams
Destinia.com
US$146
Trip.com
US$161
View all 15 deals from US$146
297 reviews
2.0 km from 7Boys Hotel
We compared the lowest prices from 15 websites
Top Rated
Breakfast included
Fairmont Amman
US$320
US$205

Expedia.com
View deal
Free cancellation
Pay up to 12X
Tripadvisor
US$205
Hotels.com
ZenHotels.com
US$320
View all 16 deals from US$205
960 reviews
2.8 km from 7Boys Hotel
We compared the lowest prices from 16 websites
Breakfast included
Grand Hyatt Amman

Taking safety measures
We compared the lowest prices from 17 websites
Movenpick Hotel Amman
US$128
US$105
Tripadvisor
View deal
Hotels.com
Expedia.com
US$105
StayForLong
US$128
View all 16 deals from US$105
935 reviews
4.7 km from 7Boys Hotel

the hotel is located 1 1/2 blocks to the bus station perfect the guy at the recption desk speaks perfect English and guided us to the bus station. He also had the cook prepare us a sandwich because we were leaving the hotel at 5:45 to catch the bus at 6am. Very nice of him. bus ride to Petra took about 2.5 hours not bad stops for bathroom brakes and coffee. Nice ride to petra.

This review is the subjective opinion of a TripAdvisor member and not of TripAdvisor LLC
missy_xw
Toronto, Ontario, Canada
74
Reviewed 2 December 2019
Friendly Staff and Great stay

We booked 2 nights at this hotel. After a long terrible flight ordeal with british airways, we finally arrived at this hotel. The receptionist saw that we were tired (15hr flight arriving at 5am) he quickly got us checked in and offered us breakfast a little earlier, which we were very thankful for. The room was spacious and very clean. Free breakfast and water/tea/coffee in room, which was a nice touch compared to north American hotels. Bed was comfy and the room was still relatively quiet despite traffic outside. There is free coffee and snacks in the lobby where we had the pleasure of meeting the owner of the hotel. He taught us the jordanian way of offering coffee when asking for hand in marriage, which was super interesting. He was super kind and even gave us advice on what to order at Hasheem's. Upon check out, I met the receptionist Islam. She was super helpful and big hearted, I brought some medical supplies from Canada for donation to those in need in Jordan. Unfortunately the clinic i wanted to bring it to closed. WIth a short amount of time in Amman, Islam took it upon herself to help me by calling people she knew who might know a clinic in need and will accept the donation. I left it to her and a few days later she sent me pictures of where it went to, Islam is a true gem! She went above and beyond and made us fall in love with Jordan that much more. My only regret is not staying in Amman longer! I HIGHLY recommend this hotel to anyone. Hotel is not far from downtown. You can uber for $3 or walk 20-25 mins.

This review is the subjective opinion of a TripAdvisor member and not of TripAdvisor LLC
Trevor N
41
Reviewed 5 November 2019
All round great stay, friendly people

Needed a last minute room adding on for our travel companions and they sorted us out on the day no problem without any extra fee. Very clean, quiet accommodation considering how central it is. Right beside the Abdali Jett bus station where you can catch a bus to Petra.

The Staff specially Islam , is amazing extremely helpful she made my life so much easier, helping me get a taxi to and from the Israel boarder, organized my car rentals and every one who staying here should go to the traditional dinner what Islam organized, you can ask and turn to Islam with any wishes ideas she will make it happen, I have been in 100 countries around the world and I am working with tourism in Hawaii she is 15 stars out of a 5 as person and costumers service, the hotel is great good location And lucky Islam is working there ,,

This review is the subjective opinion of a TripAdvisor member and not of TripAdvisor LLC
keentotravelling88
Stamford, Connecticut
126
Reviewed 8 August 2019 via mobile
Great location to access Jett bus

My husband and I chose this hotel due to its location near the Jett bus station/office. We were glad we did! It’s just a 2 minute walk! Comfortable rooms with nice desk service who helped us get to and from the airport.