US$122
US$100
View deal
SAVE US$22
Free cancellation until 30/04/21
ZenHotels.comUS$101
StayForLongUS$122
getaroom.comUS$106
View all 14 deals
Prices are provided by our partners, and reflect nightly room rates, including all taxes and fees known to our partners. Please see our partners for more details.
Payments made by partners impact the order of prices displayed. Room types may vary.
JmJewel2
1

The hotel is a nice, older property. Clean and comfortable. BUT...if you reserve for two nights and check out a day early getting a refund for the second night is NOT an easy process. I arrived on a Friday with plans to check out on Sunday. Plans changed...checked out on Sunday. Didn't look at receipt, but it showed a credit balance for one night's stay. When I got my credit card statement, it showed a charge for the 2 nights. I called the property FOUR times, but the manager was never in. No one else can put through the credit. I called Choice Hotels (offshore) customer service. They call the property and then told me to call back in the afternoon as the property manager would be there. When I called back, they said the credit had already been sent through. SO....watch your bill and credit card statement if you check out early!More

We first want to apologize for any inconvenience we may have caused you and your family. We take all issues very serious as well as our guest satisfaction. Hope you will come stay with us in the near future.

Report response as inappropriateThank you. We appreciate your input.
This response is the subjective opinion of the management representative and not of TripAdvisor LLC
See all 68 reviews
Payments made by partners impact the order of prices displayed. Room types may vary.
Nearby Hotels

Hampton.com
View deal
Free cancellation
Reserve now, pay at stay
Booking.com
US$130
ZenHotels.com
US$128
StayForLong
US$157
View all 18 deals from US$128
551 reviews
17.2 km from Quality Inn Arab Hwy 231
We compared the lowest prices from 18 websites 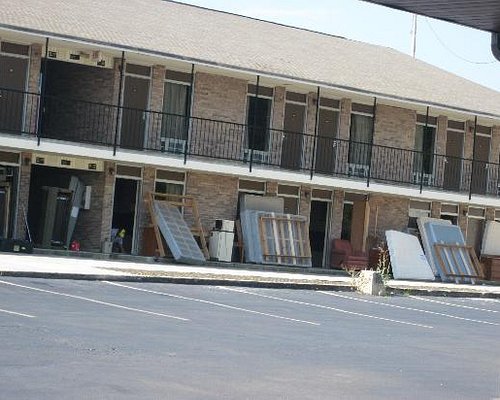 Breakfast included
Regal Inn
US$65
Booking.com
View deal
Free cancellation
Expedia.com
US$65
Hotels.com
US$65
Priceline
US$65
View all 13 deals from US$65
48 reviews
17.3 km from Quality Inn Arab Hwy 231
We compared the lowest prices from 13 websites

Believe they have been reading the past reviews. Rooms have new bedding and carpet, staff very polite. In room coffee maker worked however no cups so had to ask. Breakfast, well standard, nothing to really write home about. Nice small pool area that was very clean and well maintained. If you have kids and stop here they will be able to get rid of that extra energy. Beautiful parks close by as well.

This review is the subjective opinion of a TripAdvisor member and not of TripAdvisor LLC
Lexi C
Clanton, Alabama
165
Reviewed 3 July 2019
Great Bed and better price than Guntersville

Stayed here for business through the Hydrofest week. My room was clean, front desk staff was courteous and helpful. I worked 12-14 hour days and came back to a quiet cool clean room making it easy to shower and get a good nights sleep before doing it all again in the heat of June. Bed was great! I appreciate the price being in line with state employee per diem; not many hotels do this. Will definitely stay here again and plan to book for next years event as soon as the dates are released.

This review is the subjective opinion of a TripAdvisor member and not of TripAdvisor LLC
JAR713
Philadelphia, United States
1022
Reviewed 10 December 2018
Arab Needs Another Option

Stayed here for two nights while visiting family. First issue started at check-in. Rate I was charged was higher than the rate I booked. Was told by front desk staff that "the rate went up". What? Once I book, that is the rate I should be charged. There was another women at the front desk who I believe was either the manager or franchisee and she was able to resolve.

The room furnishings appear updated and the bathroom was small but updated as well. First impression was very positive but.........

When climbing into bed I noticed what appeared to be blood stains on the sheet. Took it to the office and got another sheet. The second sheet had to be returned as well. Looked like someone picked their nose and used it as a tissue. Finally the third sheet was clean.

Found two bugs in room the second day. One appeared to be some kind of beetle. Not sure what the other was. I assume these get in the room if the cleaning staff leaves door open while cleaning room. Did not bother mentioning this to front staff as I was leaving in the morning and what would they do about it anyway.

Breakfast was not very good. Eggs shaped like hockey pucks that were hard and dry.

Hotel sits back off of a major road with plenty of eating options. Others have commented about road noise but I did not have an issue with that.

Will likely stay in Guntersville on my next visit.

This review is the subjective opinion of a TripAdvisor member and not of TripAdvisor LLC
dawright0310
Georgetown, Kentucky
6754
Reviewed 31 October 2018
It's the only game in town

Had to book rooms last minute due to a funeral.
Group included 2 elderly people that walk with canes, and one with a broken ankle. We had to take 2nd floor rooms. Asked where the elevator was, there isn't one. Not good at all.

They have full size mattresses on Queen box springs, be careful.
Room 1 had no issues. Room 2 had a toilet that clogged and overflowed. We were moved to another room with the exhaust fan hanging from the ceiling and not working.

The pool is covered with scum, not that swimming in N Alabama is happening outside in October anyway. The advertised gym was closed during the entire stay with an "out of order sign".

Room 2 had torn duvets, then we found a large yellow stain on another. Gross.

Breakfast was available, but was rarely replentished. We also ended up at McDonalds each morning, similar to those above. The sign to not take food back to the room was tacky. Considering 3 folks couldn't do steps and the non existent elevator, they had McDonalds.

The noise coming from 231 is the worst I've ever had it a hotel room.

This hotel would step up it's game if it had some competition, but it does not. We would stay there again only because I don't want to drive from Huntsville daily to visit family.

This review is the subjective opinion of a TripAdvisor member and not of TripAdvisor LLC
darmah59
Saline, Michigan
4215
Reviewed 2 October 2018
Close but missed the mark

Literally the only place in Arab to stay, exterior looked clean, room interior was OK, then the fun started.
Hotel is behind McD and near a major highway so bring your earplugs. Air con was quite literally the noisiest thing I have ever heard, it almost drowned out the exterior. Either way it was NOISY in the room. Internet is straight out of dark ages dial up, so SLOW. The "free" breakfast is free because your could donate the WW2 surplus items. Biscuits that where better suited to the NHL, coffee from the dark ages, etc.
Overall I would drive the 20 mins to another place.