US$76
Free cancellation until 27/05/22
View deal
Booking.comUS$76
Hotels.comUS$76
TravelocityUS$76
Orbitz.comUS$76
eDreamsUS$76
Trip.comUS$76
View all 12 deals
Payments made by partners impact the order of prices displayed. Room types may vary.
Prices are provided by our partners, and reflect nightly room rates, including all taxes and fees known to our partners. Please see our partners for more details.
HelmutHungary
Hungary
3137

You get what you pay for

Pros: Cheap, mostly clean, very close to the university, ok breakfast, very kind and helpful staff
Cons: Very dated rooms, very dated furniture (therefore you cannot really tell how clean the room was - it is not easy to keep such dated rooms clean...), uneven walls, tv just over the sofa at 1,6 meter, so a lot of chances for tall people to beat their heads, the whole building is a castle-like very old building, a lot of stairs, no elevator, it is not easy to find your room since the corridor is a bit confusing with a lot of turns and stairs.
Since this hotel is really just a few minutes away from the university, I think I will stay here again, but remember that you get what you pay for.More

Show less
See all 42 reviews
Payments made by partners impact the order of prices displayed. Room types may vary.
Nearby Hotels 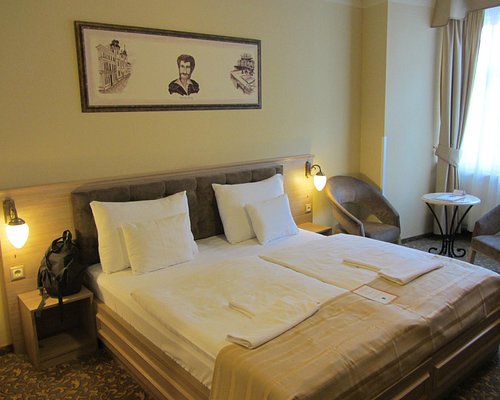 Breakfast included
Barokk Hotel Promenad
US$99
US$94
Booking.com
View deal
Expedia.com
US$98
Priceline
US$99
Hotels.com
US$98
View all 14 deals from US$94
81 reviews
0.9 km from Revesz Hotel and Rosa Spa
We compared the lowest prices from 14 websites 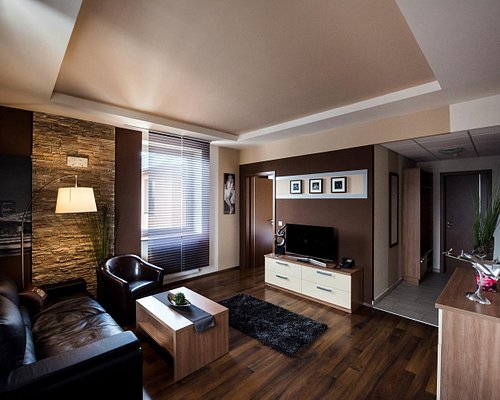 Expedia.com
View deal
Free cancellation
Reserve now, pay at stay
Booking.com
US$65
Priceline
US$65
Hotels.com
US$64
View all 14 deals from US$64
178 reviews
1.1 km from Revesz Hotel and Rosa Spa
We compared the lowest prices from 14 websites
Baross Boutique Apartman
US$64

Expedia.com
View deal
Free cancellation
Pay up to 12X
Booking.com
US$55
Priceline
US$59
StayForLong
View all 12 deals from US$55
22 reviews
1.3 km from Revesz Hotel and Rosa Spa
We compared the lowest prices from 12 websites
Top Rated
ibis Gyor
US$53

ibis
View deal
Expedia.com
US$52
Priceline
US$53
Destinia.com
US$59
View all 15 deals from US$52
280 reviews
1.5 km from Revesz Hotel and Rosa Spa
We compared the lowest prices from 15 websites
Breakfast included
Hotel Capitulum
US$101
US$71

I stayed here for one night on my solo cycling trip from Vienna to Budapest, and had the recommendation from some others who had stayed there while doing the same trip. No major complaints, and some very positive aspects. First, I initially booked a room for a night while I was ambitiously hoping to reach Gyor that night, and although there was no deposit the email confirmation said I was responsible for the night if I was a no show. Even after my no show they re-booked me for the following night, and I arrived to find....I was too early to check in and get my room, shower, etc. But for a small additional fee I was able to claim my room before lunch, so I could shower, eat lunch, and take a good nap after a hard couple of days of riding and what was clearly a developing chest cold. The (somewhat) bad: there are lots of winding, uneven staircases to get up to the rooms, and although I am fit and had very little luggage, I was exhausted from my ride and a little sick, so this was inconvenient. The morning walk to the breakfast area was like following a maze - apparently a different building connected through a labyrinthine passageway. And the breakfast was mediocre: some cold cuts and cheeses, mediocre white bread, not great coffee and sugary juices. The woman who waited on me was the same one who the night before barely wanted to serve me a double espresso. The women at reception were pleasant and efficient however: bike storage was another exercise in following an outdoor labyrinth, but they were pleasant and when I woke up the next morning realizing my cold had sapped me of the energy necessary to power me the rest of the route by bike to Budapest, they helped me figure out the best bike route to the train station where I caught a late morning train for Budapest.

This review is the subjective opinion of a Tripadvisor member and not of TripAdvisor LLC.
David R
Preston, United Kingdom
13
Reviewed 22 March 2015
most expensive palinka in Győr

Went here with my wife (who is Hungarian) my first impression was good, we wasn't stopping in the hotel as we were just going to the pool bar next door. After getting a few drinks and going to the pool table I decided to go the bar and order 2 palinkas. As I am English and my Hungarian is not so good I struggled to communicate with the staff and when they realised I was not Hungarian I think they purposely overcharged me!!!!! 1100huf/ shot which does not seem a lot but saying that the menu stated that palinka was 750huf/ shot. When my wife realised she asked in Hungarian why it was so expensive they said I ordered the expensive one ( which was not on the menu)!!!!!! I would like to think they should incourage English tourist not scare them off!!!!

This review is the subjective opinion of a Tripadvisor member and not of TripAdvisor LLC.
nwk_berlin
Ballston Spa, New York
221103
Reviewed 5 December 2014
Lovely Stay but Lots of Stairs!

I really enjoyed staying at this hotel. The staff were very nice. The breakfast included a great variety of hot and cold items.

The only drawback was the number of stairs everywhere (and no elevator). I had a room on the second floor (American 3rd floor) of the first building--a charming single room with a dormer window. The bathroom was very modern. I believe that the air conditioner had been recently added--without one, summer in that room would probably be stifling. In addition to the rooms on my floor there were a couple of lovely sitting areas.

One aspect of the hotel that I discovered is that it is composed of several connected buildings with floors at different levels. So when I started walking from my part of the building to the breakfast area, which was in the farthest part of the building, I found I was going up and down many stairs. But I solved that problem by simply going out the door by the reception and crossing the outside courtyard to door by the breakfast room.

I did have a problem with the WiFi--it seemed unstable in my room.

There is a very nice cozy restaurant in the cellar. It had a variety of different dishes available. My dinner was excellent.

The staff was very welcoming and helpful. I would recommend this hotel to anyone who isn't afraid of a few stairs. It was a very good value for a very nice stay!

This review is the subjective opinion of a Tripadvisor member and not of TripAdvisor LLC.
Willspen
Ramsey, New Jersey
7446
Reviewed 3 November 2014
Btter than average hotel for Hungary

I cycled the Danube cycleway and stayed here. It was one of the better places I stayed in Hungary. By European standards, the price was fair. The young man at the desk was helpful. The included breakfast was the best 'breakfast included' that i had in Hungary, but that is not saying a lot. I'd stay here again. Room clean, bed comfortable. The hotel is an interesting 15-minute walk across the river to the old town. If you want a room for around USD 50 a night, this is a great find, imo. In the USA you'd never get this quality, service and care for 50 a night!

This review is the subjective opinion of a Tripadvisor member and not of TripAdvisor LLC.
Darko_Vukovic
Belgrade, Serbia
2439
Reviewed 25 September 2014
Fair hotel

Hotel is ok, not luxurious but it is quiet and clean. It is situated in a great location and serves a very good breakfast. The rooms are small but clean and quiet. The staff is friendly. Rating is 7 out of 10 for this type of hotel.