Prices are provided by our partners, and reflect nightly room rates, including all taxes and fees known to our partners. Please see our partners for more details.
CrunchieFan
Erding, Germany
4525

Big clean room. Bedsheet on one bed was too short leaving it bare underneath the pillow. Thin walls. Good shower, hairdryer in bathroom. Breakfast in basement. Buffet with quite a good selection, buns, cold cuts, vegetables, müsli, quark. Watered down juice. Coffee in thermos flasks. Lost appetite when we noticed the mould on the walls.

Trip type: Travelled as a couple
See all 50 reviews
Payments made by partners impact the order of prices displayed. Room types may vary.
Nearby Hotels 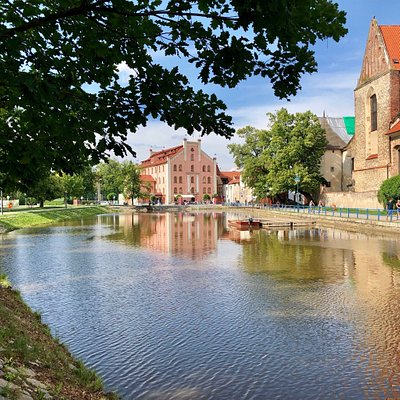 Expedia.com
View deal
Hotels.com
ZenHotels.com
US$67
Booking.com
View all 16 deals from US$67
463 reviews
0.2 km from HOTEL V CENTRU
We compared the lowest prices from 16 websites

- located at very busy road with full of noisy cars, could not sleep well
- no car park
- extremely slow wi-fi (the slowest I have ever experienced)
- food in downstairs restaurant pretend to be healthy but is not, it is bad
- breakfast very poor

This review is the subjective opinion of a TripAdvisor member and not of TripAdvisor LLC
jjemm2017
Emmen, The Netherlands
163
Reviewed 20 September 2017
good hotel

Its a hotel with the right price product. Renovated, not to modern. Breakfast is good. You can not parc in the front of the hotel. But nearby. Frindly staff. There is also a posibility to park in a nearby parkhouse.

This review is the subjective opinion of a TripAdvisor member and not of TripAdvisor LLC
lmt032
Prague, Czech Republic
3752
Reviewed 27 August 2017 via mobile
Good location, average accommodation

Stayed here for one night and the location was very convenient, just off the old town square. However, the accommodation was very basic.
The reception was only open until 9pm but the receptionist actually left at 8:30pm.

The rooms were very tired with cheap looking furniture, the carpets looked dirty with stains on them. The curtains were so short that they didn't even cover the full window so in the morning when the light came in, the sun was shining in your eyes.
No coffee or tea making facilities.
The headboard was attached to the wall and covered over the plug sockets.
The shower had mould around the grouting and rust on the shower head.
The upside was that the bed was relatively comfortable.

The room we stayed in was close to the stairwell and the lights in the hall were on a timer and needed to be switched on. When you came out of the room, there was no light switch close to the door and you had to guide yourself in darkness to find the light switch. I think this is actually dangerous considering there is a stairwell right next to the door, with tiled stairs. If someone was to lose their footing in the dark then they could seriously injure themselves.

The breakfast was again very basic.
Nothing cooked. Just some bread rolls, ham, cheese, a few cereals and cakes in a wrapper.

I think some room renovations are in order and they should but a door over the stairwell to prevent accidents.
It was bearable to stay just one night but couldn't have stayed here any longer.

This review is the subjective opinion of a TripAdvisor member and not of TripAdvisor LLC
285carolynh
Darwen, United Kingdom
363179
Reviewed 10 June 2017 via mobile
Basic room spoiled by noisy street outside and no air con

Stayed here as our usual hotel was booked but will not return. The lady at reception was friendly and helpful but her boss walked through and spoke to her like crap, poor girl.
The room was beyond basic, no air con so we had to leave the window open...bad decision! The street was so noisy all night we couldn't sleep so ended up getting up at 5am and leaving.
Such a shame as it's an interesting building just off the beautiful town square.

This review is the subjective opinion of a TripAdvisor member and not of TripAdvisor LLC
AliceGrade
Prague, Czech Republic
3045
Reviewed 3 May 2017
Hockey trip

We got apartment in first floor, pretty big for two persons....the tv isnt in the bedroom but in the living room so little bit uncomfortable, bit cold in the room and bathroom, small kitchen with fridge, we were tere coz of ice hockey so we choose this coz it is nearby of the arena and also few steps from centre, the main square. Also parking is nearby so it was fine, but nothing special, breakfast is for extra payment, small breakfast room, with standard breakfast food. Just one thing was awfull...the "green" restaurant and the steench wht went thru the door to the room all the morning till afternoon. and slow wifi.