US$130
US$99
View deal
SAVE US$31
Free cancellation until 13/05/21
TravelocityUS$130
CheapTicketsUS$130
Orbitz.comUS$130
View all 16 deals
Prices are provided by our partners, and reflect nightly room rates, including all taxes and fees known to our partners. Please see our partners for more details.
Payments made by partners impact the order of prices displayed. Room types may vary.
Jana81000
Moscow, Russia
810

The hotel is on a good location, few minutes from the center. The room was very clean and smelled nice, and it had a very nice view (we were on 16th floor). Breakfast is also good (fruits, oatmeal...). I would recommend it. More

Thank you for your recent visit and for providing this positive feedback.

Report response as inappropriateThank you. We appreciate your input.
This response is the subjective opinion of the management representative and not of TripAdvisor LLC
See all 288 reviews
Payments made by partners impact the order of prices displayed. Room types may vary.
Nearby Hotels 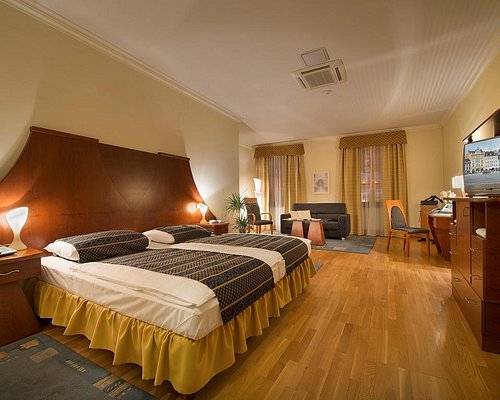 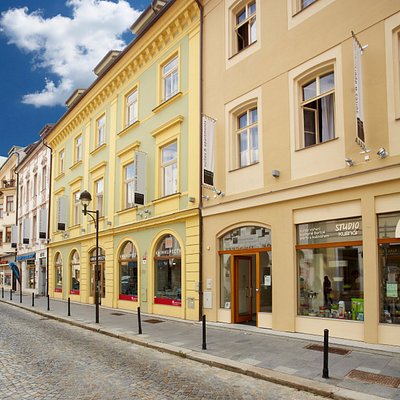 Top Rated
Residence U Cerne Veze Ceske Budejovice
US$68
Booking.com
View deal
Expedia.com
US$68
Hotels.com
US$68
eDreams
US$68
View all 10 deals from US$68
168 reviews
0.7 km from Clarion Congress Hotel Ceske Budejovice
We compared the lowest prices from 10 websites

Breakfast included
Grandhotel Zvon
US$50
Booking.com
View deal
Expedia.com
US$50
Agoda.com
US$44
StayForLong
US$56
View all 16 deals from US$44
463 reviews
0.9 km from Clarion Congress Hotel Ceske Budejovice
We compared the lowest prices from 16 websites
Breakfast included
U Tri Hrusek Suites & Apartments
US$97

The hotel is nice and modern and located not far from the city centre. Breakfast is good although the choice for vegans is very limited.

We are in a group of 7 people, and we have 5 rooms booked. When we arrived at the hotel we were in a rush as we needed to go at an event we were attending and our train journey from Prague was delayed. We stood at the reception desk waiting to be acknowledged for checking in. After a 5 minute wait, we politely asked to be checked in as a taxi was waiting for us to bring us to the conference place.

A check-in clerk, who we later discovered was the manager, quickly checked us in and takes our passports. She tells us – I’ll give them back to you in 2 hours. We refused to leave our passport as this is a very unsafe practice. She suddenly starts talking in her own language in a very angry tone – and despite our lack of Czech language skills, we could tell she was swearing at us.
I made her understand that I can tell she is swearing at us and at this point she stops.

This was not the only poor service received. Every time we would ask a question at the reception desk it felt like they were annoyed and that they really did not want to speak to us or help us in any way. Really bad attitude thinking that their job is to be helpful to customers.

The hotel offers a room service – however despite having a menu most items were not available. We asked for a portion of fries and they said “it comes with chicken”. Being vegan, we obviously did not want the chicken and we asked just for the chips and they refused to provide them, insisting that we had to get the chicken too. Such a poor service.

One evening we were at the bar and having a good time with our colleagues over drinks. We notice the bar is about to close so I made my way to the bar to place the last order – the lady tells me the bar is close and she cannot take the order. The bar was actually due to close in 5 minutes – in fact two other guests ordered some wine, which they were given, and the payment was take after the bar was closed. Still no idea why my order was refused.

The room we had (a superior room) was lovely, modern and had nice amenities.

I would never return to this hotel and similarly, would not recommend staying in this hotel particularly because of the unfriendliness and poor service by the hotel staff.

I was recentelly visiting as a guest on a congress. As ususally, everything was perfect, and I was satisfied.. I was at the hotel for a third time, and there was never anything bad about it.

P. S. from the higher floors, there is an amazing view..

Thank you for your recent visit and for providing this very positive feedback.

Report response as inappropriateThank you. We appreciate your input.
This response is the subjective opinion of the management representative and not of TripAdvisor LLC
sinisah2s
1
Reviewed 27 April 2019
Avoid for long stay

I'm already 3 weeks in the hotel, it was booked by the company I work for. Hotel is terrible for a long stay, crowdy holidaymakers, long wait for elevators, staff at the reception ignorant, foreign currency exchange rate 15 % less than the official rate, breakfast restaurant overcrowded with tables not cleaned promptly, the worst laundry services in all hotels I have been so far...in the hotel booklet stated laundry delivered before 9.00 am will be returned the same day, after 2 days of waiting (happened twice) had to go to the reception to ask where is my laundry, all my t-shirts and sweaters got a size smaller while washed, complained at the reception but no follow up. Apparently, the hotel can afford such bad services as Ceske Budejovice are crowded with tourists and all the hotels in the city are busy.

This review is the subjective opinion of a TripAdvisor member and not of TripAdvisor LLC
Tadejajere
Grosuplje, Slovenia
6244
Reviewed 25 April 2019
Avoid it if you are a business person

The hotel is a 16 floor building for crowdy holidaymakers and not a business or congress (as stays in the name of the hotel). Double rooms are too small for 4☆ hotel not to mention bathrooms and hotel restaurant. The hotel designer made a restaurant where 200 breakfast willing tourists at once become just a food hunting crowd. WI-FI doesn't work in the upper floors.
The hotel is suitable for one night groups of holidaymakers, who just run from one to another place, shooting photos and make trip with a title "Know Europe in few days".

Overall is good - room , food except the blonde woman receptionist in the morning of 19 april 2019. She has bad service mind. I should have rated this hotel to exellent , If I had gotten good feeling. She showed her displeased facial expression when I asked her for keycard again cause I forgot my belonging in the room.
Yo
Thailand