La Bougainvillea
Lock in the lowest price from these sites

Priceline
ZenHotels.com
StayForLong
View all 5 deals
Prices are provided by our partners, and reflect nightly room rates, including all taxes and fees known to our partners. Please see our partners for more details.
Payments made by partners impact the order of prices displayed. Room types may vary.
handt2k15
4725

I would rate the hospitality of this place as 4* it is set in a beautiful location but could be improved with finer attention to detail. For example more care to prevent cockroaches in the bedrooms. The staff are incredibly friendly but slow and misunderstand a lot of requests so management could invest more time in training. The sand flies may not be helped but do impact the holiday and by the end we were pickled by bites which are extremely uncomfortable. In addition the food and drinks are cripplingly expensive. Overall a pleasant stay but perhaps not great value for money.

Trip type: Travelled with friends
See all 66 reviews
Payments made by partners impact the order of prices displayed. Room types may vary.
Nearby Hotels 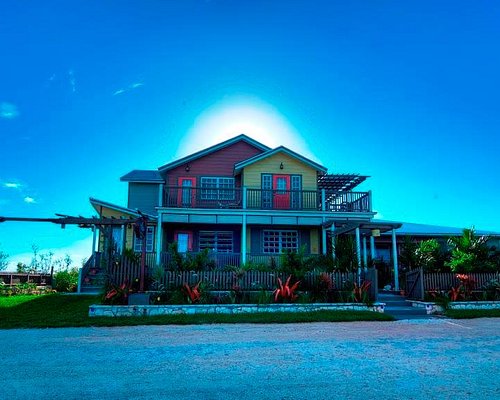 Top Rated
Villa Allamanda, Eleuthera
US$269
US$247
Booking.com
View deal
Reserve now, pay at stay
Expedia.com
US$269
Hotels.com
US$269
eDreams
US$247
View all 15 deals from US$247
190 reviews
9.1 km from La Bougainvillea
We compared the lowest prices from 15 websites

Pineapple Fields Resort
US$329
Booking.com
View deal
Reserve now, pay at stay
Priceline
US$329
Agoda.com
US$329
Tripadvisor
US$329
View all 6 deals from US$329
572 reviews
3.3 km from La Bougainvillea
We compared the lowest prices from 6 websites 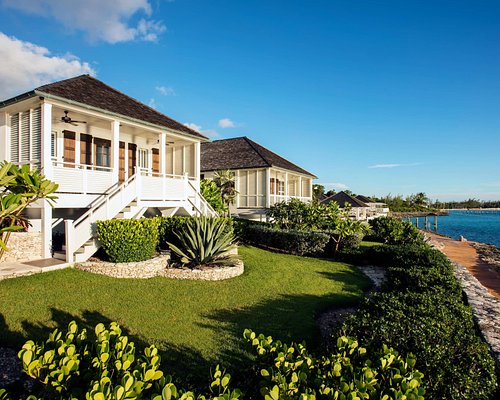 Taking safety measures
We compared the lowest prices from 15 websites
Hut Pointe Inn
US$286
Booking.com
View deal
Reserve now, pay at stay
eDreams
US$286
Priceline
US$286
Agoda.com
US$286
View all 11 deals from US$286
96 reviews
11.4 km from La Bougainvillea

We stayed 4 nights at this lovely hotel. The owner Tom, and staff are friendly and make you feel right at home. We had an ocean front/view room which has the most breathtaking view. The on-site restaurant cooks up good food. Chef Mo is friendly and accommodating. This is a new and small boutique hotel so they are still working out the kinks. I would’ve love to see a designated smoking area. We sat at the cocktail bar for dinner one night and the guy next to us lit up a cigarette. Luckily the restaurant wasn’t busy which allowed us to move to a table further out. It would’ve also been nice if there was an actual front-desk staff to help with the luggage and check-ins. No one was at the front to welcome us upon arrival. We flagged down a maintenance staff who went to look for the manager. All in all, I would still recommend this beautiful hotel. The room price is competitive. The restaurant price is on point with nearby fine dining such as the French Leave restaurant. This place has a lot of potential and we would definitely return.

This review is the subjective opinion of a TripAdvisor member and not of TripAdvisor LLC
sandnseas4me
Leander, Texas
19
Reviewed 11 August 2018 via mobile
Get much more for your money elsewhere

This experience started out terrible from the minute I booked this place. The
website states up to 10 people, but what it doesn’t state is that if you bring over 6 they charge you $1000 per person! Tried to cancel within 24 hours of booking and the owner declined.
Also stated on the website light house keeping 5 days per week. What it doesn’t tell you is you pay extra. You also pay for drinking water. The pots and pans were minimal, mix matched, and very poor quality. Hard to cook for 7 people. And try not to notice the ants crawling all over the kitchen. The charcoal grill provided was barely big enough to fit four burgers at a time and my husband had to get down on his knees to use it.
Went over to the bar for a drink and they were out of ice.
Went to the restaurant the first night we were there for pizza night and we were told they couldn’t feed a group our size without at least a day’s notice. It actually
took them four days to be able to organize one meal. We showed up at 7:30. as we were instructed , only to find out the kitchen ran out of propane. Almost an hour later food started coming out one item at a time. First, plain white steamed rice, followed by frozen mixed vegetables finally 30 minutes later fish that we provided.Nothing gourmet or Bahamian about it. And a bottle of wine that sells for $11 in the states (19 Crimes)
Was marked up at $70.
We went to the office to ask the manager about some close by beaches to snorkel on the Caribbean side. She (Sophia) told us that she wasn’t very familiar with the island so she would find out and text me. That never happened.
It is very obvious that the owner (Tom), a Florida real estate guy, is only trying to make money. He has a poorly managed, very over priced property and will nickel and dime you for everything he can.
There are some really cute cottages and other rental houses on the island that you can definitely get your money’s worth. Also much better restaurants. We tried a few, such as Tippy’s and Buccaneer Bar and Grill. Do yourself a favor and STAY AWAY FROM THIS PLACE.

This review is the subjective opinion of a TripAdvisor member and not of TripAdvisor LLC
Charlotte W
32
Reviewed 23 July 2018
A Bit of Paradise!!!

While I would love to keep this beautiful hotel all to myself, that would just not be fair to Tom and all his amazing staff!!! La Bougainvillea sits on a beautiful expanse of pink sand beach. Walking the beach in 1 direction we saw no one....went in the other direction and saw 1 person and a dog!!! The infinity pool is to die for!!! Our room had a wonderful pool and ocean view. I got a chance to see the 3 bedroom villa which is absolutely breathtaking!!! It has its own splash pool and loungers. Mario, the chef, is arguably the best on the island! Grilled shrimp was to die for!!! If you are lucky enough to be there when they fire up the wood fired oven have pizza....yummy!! The staff made my birthday dinner very special...from decorations to singing!!! AGAIN....staff is amazing!!! if going to Eleuthera at least visit this BIT OF PARADISE!!!

This review is the subjective opinion of a TripAdvisor member and not of TripAdvisor LLC
Felicity I
Nassau, New Providence Island
4422
Reviewed 29 June 2018 via mobile
A most memorable experience!

La Bougainvilla is a resort which sits on the most beautiful, flawless, pink sandy beach. It includes a moroccan-styled main house and amazing villas. I feel so at home. I am in awe of my room and the view, the food is excellent as is the service, and I just love the infinity pool. Thomas is a welcoming host as is Sophie. I would definately return!

This review is the subjective opinion of a TripAdvisor member and not of TripAdvisor LLC
Laurent L
184
Reviewed 9 June 2018 via mobile
WE LOVED THIS PLACE!!!

This place was excellent and the manager Sophia is Great! To our surpise the food at the restaurant was the BEST we had on the island during our 6 day trip. Chef Mo is the best cook in Eleuthera! She prepared our private Wedding Anniversary dinner with Love and Eleuthera charm. The people here are amazing and the ALL of the staff are warm and welcoming. Additional Thanks to our housekeeper Buella, as our room was spotless. Lastly, Mario for making sure the cafe TV was tuned in for the NBA Finals game. We definitely recommend room 9 and will be returning. Oh and how did I forget to mention the SECLUSION AND PRIVACY. The resort is quaint and small and the beach was completely empty for miles each time my wife and I were out.

This review is the subjective opinion of a TripAdvisor member and not of TripAdvisor LLC
View more reviews
PreviousNext
1…789…
<script type='text/javascript' crossorigin='anonymous' async onerror='__scriptLoadError(this,true);' src='https://static.tacdn.com/assets/MBK0so.e8a9bef