US$111
US$85
View deal
PricelineUS$93
Hotels.comUS$87
travelup.comUS$111
View all 16 deals
Prices are provided by our partners, and reflect nightly room rates, including all taxes and fees known to our partners. Please see our partners for more details.
Payments made by partners impact the order of prices displayed. Room types may vary.
coenw462
Zoetermeer, The Netherlands
20579

Stayed here during the corona regime which was well adhered to. Were upgraded to an executive room which was perfect: great air conditioning, bed, small fridge and nice bathroom. Only minus was the fact that the height of the shower was rather low, especially for tall people. Hotel provides covered private parking for 1 euro/hr. Great location along the river the Seine and easily accesible from the highway. Also close to Versailles but don’t take the 9 km long highway tunnel unless you are happy to pay some 8-9 euro toll. Area was poor for restaurants, hence we went to Place des Impressionists where there was a nice selection of outdoor terraces and restaurants. All in all an excellent stay !More

Show less
See all 379 reviews
Payments made by partners impact the order of prices displayed. Room types may vary.
Nearby Hotels 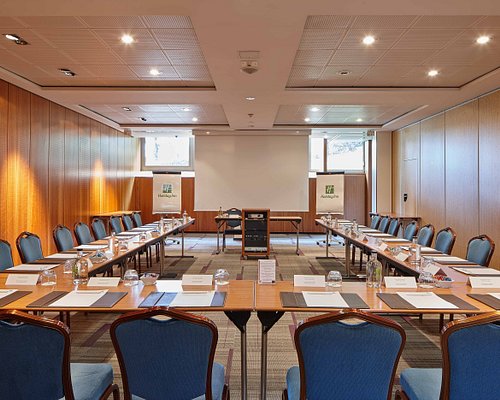 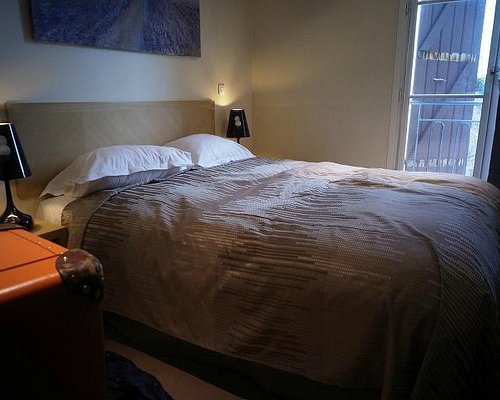 We booked this hotel for our first two nights in France, to visit Versailles. As well, I am an IHG member.
The public areas are great, bright, cheerful and clean. The room was a different story. It was in need of an update. The bathroom was great, really good shower. The rest of it was lacking and almost dank. It needs new linens and better ventilation.
Our first night, we were evacuated after being asleep for two hours, when the fire alarms went off. Apparently a guest took an extra steamy shower, setting off the alarms. I have a version of PTSD from the alarm and evacuation. ZERO compensation from the property, like maybe a free breakfast?!
Speaking of which, breakfast is great. The restaurant in general is great, which is nice, since the little community does not offer much else, especially on Mondays. Some staff were patient with our attempts to communicate in French, others were NOT. The parking garage is compact and tough to negotiate when its more than 2/3 full. Also, the hotel seems to mostly cater to business travelers, which explains a lot. Take a walk up to the local church, its lovely.

Thank you for your review and for staying with us. We appreciate your kind words about our public areas. I am sorry to hear the room was a different story and for any discomfort the issue with the alarm caused you. I have shared your comments with our management teams to help point out areas that need additional attention.

Despite the setbacks mentioned on your review, I hope you would give us another chance to make your stay better than the last.

Report response as inappropriateThank you. We appreciate your input.
This response is the subjective opinion of the management representative and not of TripAdvisor LLC
Antoine_Aoun
Beirut, Lebanon
3431
Reviewed 10 October 2019
Beautiful Hotel near Paris

This was my second stay at this hotel.
It's a nice hotel near Paris beside the Seine River with a nice walk near the river.
The staff was more than amazing with full recognition of my platinum membership and free upgrade to a newly Executive design room with a basket of fruit waiting in the room.
The location is great if you want to explore Bougival and Versailles.
Breakfast is one of the best i had at any Holiday Inn hotel.
Maybe a third stay one day !!!

Dear Antoine_Aoun,
Thank you for taking the time to share your comments.
We are here to make your stay the most comfortable and enjoyable as possible.
We will be glad to have you back soon.
Best regards,
Coralie, Assistant Front Office Manager

Report response as inappropriateThank you. We appreciate your input.
This response is the subjective opinion of the management representative and not of TripAdvisor LLC
Val C
Worcestershire
4014
Reviewed 9 October 2019 via mobile
Average hotel

Rooms clean, beds very soft. Nice to have separate toilet to bathroom. Bathroom nice and modern.
Breakfast was good, plenty of choice, cooked, fruit, cereals, croissants, bread, ham, cheese. Can get quite crowded with coaches booked in.
Evening meal on Sunday left a lot to be desired. Told we had to have buffet at 30 euros with glass of wine, no menu available. The food was awful. We saw another table having burger, pizza and pasta and when I queried this I was told we couldn't have it, had to have buffet. Staff were very disorganized, didn't seem to know what they were doing. We were on our main course and hadn't received the wine so had to remind the waiter, had to ask for table water and even clear our own table despite there being two waiting staff on. I had fish 'casserole,', my friend had chicken and I had a bad stomach all the next day. It was the worse meal of our whole weekend staying in Paris.
General areas of the hotel were bright and clean.
Didn't appear to be many restaurants close by, I think one, restaurant to the left of the hotel as you walk out of the hotel, so the hotel really has the monopoly unless you travel into Paris, which we did one evening and had a fantastic meal in the Latin quarter.
Wouldn't choose to stay here again

Dear Val C,
Thank you for taking a moment to give us your feedback regarding your stay in our Holiday Inn.
I am sorry to hear our hotel did not meet your expectations on this occasion.
Kind regards
Coralie, Assistant Front Office Manager

Report response as inappropriateThank you. We appreciate your input.
This response is the subjective opinion of the management representative and not of TripAdvisor LLC
Sandra M
32
Reviewed 7 October 2019 via mobile
Restaurant poor

The service we experienced in the restaurant on Sunday could not have been any worse and our complaints were ignored. Also the quality of the food was appalling and extremely overpriced. We would not recommend using this restaurant.

Dear Sandra M,
We would like to thank you for your feedback regarding your stay in our Holiday Inn.
We are very sorry to hear our restaurant did not meet your expectations on this occasion.
We will use your comments to coach our team in order to provide a better experience in the future.
Once again, thank you very much for staying with us and for your review.
We hope to see you next time and that you will have a much better experience and a greater feeling of what this hotel can really offer you.
Sincerely,
Robel, Rooms Division Manager

Report response as inappropriateThank you. We appreciate your input.
This response is the subjective opinion of the management representative and not of TripAdvisor LLC
283philb
Newport, United Kingdom
4917
Reviewed 5 October 2019 via mobile
Longchamps

We also had a dispute with a taxi driver and instead of acting as interpreter there is no question the receptionist Was looking to help him rip us off. €135 to get a valet done. When I asked for a receipt the receptionist said you can’t have one until
The job is done I explained the driver should give me one which the bar man Habib agreed to but the taxi guy drove off. The receptionist kept telling me the receipt would come. It never did !
Do not stay there!

Dear 283philb,
Thank you for staying in our hotel and for your feedback.
I will try to respond to your review.
Please be informed that you may not pay the same price each time you take a cab. It of course depends on the time and the traffic jam for example. When you ask the hotel to reserve a cab for you, by the time the driver arrives at the hotel he already has what we call “un forfait d’approche” which is a kind of beginning meter price. You have to add to the price an additional amount that takes into account the distance and the time it takes to come to the hotel.
Regarding the 135€ that you paid, the taxi driver called a carwash in order to have a price to clean the seat and get rid of the unpleasant odors because one of you had an accident and eliminated solid waste. You can imagine how unhappy the driver was. As a taxi driver, he will not be able to use his taxi for some time. The only thing that Dylon did was trying to help you. When you asked the driver a receipt, he said that he is unable to give you one but asked you to come with him to the car wash because they will be cleaning the car and give you the receipt. You did not accept that and the driver drove off.
Thank you again for your comments.
Kind regards,
Robel, Rooms Division Manager