Prices are provided by our partners, and reflect nightly room rates, including all taxes and fees known to our partners. Please see our partners for more details.
TravelandEatAsYouGo
11880

We stayed at the hotel recently in what is low tourist season for Thailand. The hotel is huge; built on a grand scale with a massive lobby, restaurants etc and a large ornate swimming pool. It has over 300 rooms and often caters for conferences. The only rooms available during the season were the deluxe rooms which were large and well equipped with comfortable beds and nice bathrooms. Although for that night, we were the only guests at the hotel (we had booked 2 rooms), there was a full complement of staff i.e. porters, chamber maids, receptionists etc. Everyone made us very welcome. Breakfast, which is usually a buffet, was an a la carte from which we could choose anything and as much as we wanted. I was impressed that the hotel maintained their standard even for just 2 rooms. I will definitely recommend this hotel to any friend travelling to Utaithani to see the temples or on their way up north as a stopover.More

Show less
Room tip: Some rooms look outside to the grounds, whilst others look inwards to the swimming pool.
See all 23 reviews
Payments made by partners impact the order of prices displayed. Room types may vary.
Nearby Hotels 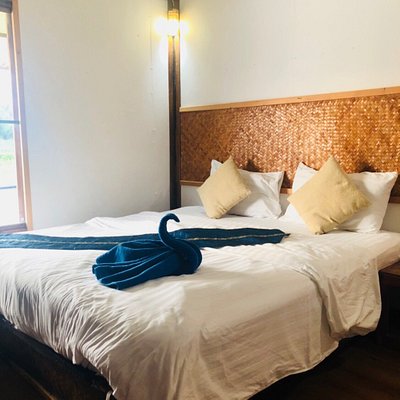 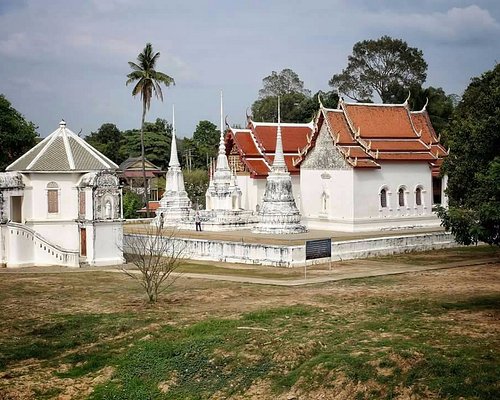 Massive Hotel complex just some kilometers from the city - over 360 rooms...
Quite strange that there were only 2 rooms booked for the last night.
Anyway the hotel is quite nice, merging diifferent styles of Asia...
Assuming that this hotel is mainly used for weddings.
Good for us - all the staff was focusing on us and they have done a wonderful job.
Definitely the place to stay while you are in Uthon Thani.

This review is the subjective opinion of a TripAdvisor member and not of TripAdvisor LLC
Keith D
Singapore, Singapore
1515
Reviewed 18 July 2017 via mobile
Ok lah

This is where ott meets Thailand. This hotel design is like a mad professors dream.
Nothing wrong with that of course if that's your cup of tea . In my case it isn't.
Nice enough people . Decent rooms if somewhat dated. My grip is 5 star prices 3 star facilities. No restaurant to speak of . Spa closed. Breakfast 2 star. I booked on the day via an aggregator. These issues should be mentioned especially at the price and maybe, they were, but I didn't see them and i was mightily disappointed after a 6 hour drive from Chiang Mai enroute to Bangkok. I'm sure other people book for the the same reason but today I was one of the very few who did book and immediately regretted it upon checking in.

This review is the subjective opinion of a TripAdvisor member and not of TripAdvisor LLC
Lily S
Bangkok, Bangkok, Thailand
8440
Reviewed 11 February 2017
What a Big Hotel & Huge place!!!!!!

My family stay at lyara Lake and hotel for one night we on our way from Chiang rai we only stay one day. And the staff look so friendly and kind. When we went inside we were Suprise how huge this place is its look like a Siam Reap outside . We didn't see any guest only s few only 10 room were open for 300 room. The building was big it's have 300 rooms!!!. It's very expensive 3,500 baht .But no one is stay being in hotel so it's feel weird.
we can see swimming pool is huge and nice.bicycles for riding around,fitness club,and our room is clean and nice cozy bed..it's a would be a great place to have a wedding party. But we only stay for one night is okay. but there no car pass here and nothing to see inside.

This review is the subjective opinion of a TripAdvisor member and not of TripAdvisor LLC
RejB1
Montreal, Canada
175
Reviewed 8 January 2017
What a nice & huge place!

Me and my wife stay at Iyara Lake Hotel on December 10 for 2 nights.
Very impressive place (huge) in the middle of green lands. We selected the Uthai Than suite and didn't regret it :-)
I only wish our room windows weren't frosted by a film for privacy as I would like to see the surroundings.
(not a real issue)
Clean & quiet place, staffs were very nice to us, thanks again to you people of Iyara Lake for this pleasant stay.

This review is the subjective opinion of a TripAdvisor member and not of TripAdvisor LLC
Sophie G
157
Reviewed 6 January 2017 via mobile
Great hotel for stopover.

We stayed one night as a stopover from Mae Sot to Bangkok. We were the only one staying in that hotel (hotel has 400 rooms!). Hotel mainly used as a business/conference hotel. Rooms were great and the hotel also looks greatly maintained. Dinner and breakfast were good. Staff friendly and helpful. The kids couldn't use the paddle boats, so they were sad. But they also had a little farm, which they liked. There is not much you can do/see in Uthai Thani. They have to advertise their restaurant more, while it's good and not expensive.