US$95
Free cancellation until 16/05/21
View deal
Hotels.comUS$96
FindHotelUS$95
CheapTicketsUS$95
TravelocityUS$95
Trip.comUS$96
Orbitz.comUS$95
View all 17 deals
Prices are provided by our partners, and reflect nightly room rates, including all taxes and fees known to our partners. Please see our partners for more details.
Payments made by partners impact the order of prices displayed. Room types may vary.
louCork
Midleton, Ireland
190142

We spent a relaxing night at this lovely hotel, the Lobby is bright and welcoming , The rooms are re vamped and modern and warn , with everything you could need . The staff are friendly from check in to bar and restaurant staff . We had mushroom soup and some of the nicest brown bread , then our dinner that night had the most succulent roast beef , i was ashamed to say i couldn't finish it . The breakfast is served overlooking the scenery of Bantry Bay . The Full Irish is freshly cooked and served by some of the Friendliest girls , and more of that scrumptious brown bread . I am looking forward to going back soon .More

Dear LouCork,
I would like to convey my thanks on behalf of myself and the team here for your lovely review and the kitchen team especially appreciate the uplifting words. We hope to see you again should you revisit the area.
Very best wishes
Mark Golden
Operations Manager

Report response as inappropriateThank you. We appreciate your input.
This response is the subjective opinion of the management representative and not of TripAdvisor LLC
See all 359 reviews
Payments made by partners impact the order of prices displayed. Room types may vary.
Nearby Hotels 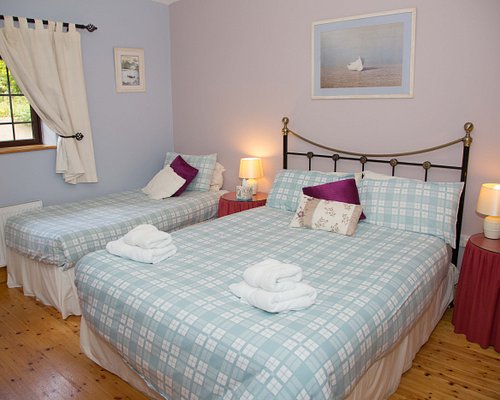 Expedia.com
View deal
Free cancellation
Pay up to 12X
Hotels.com
US$114
Agoda.com
US$100
CheapTickets
US$114
View all 15 deals from US$100
89 reviews
3.2 km from Westlodge Hotel
We compared the lowest prices from 15 websites

On arrival first thing we noticed how great all the staff were dealing with the covid regulations and how compliant they were everywhere,staff all wearing masks hand sanitizers everywhere so we felt really safe. Bedroom large and spotless again sanitized within an inch of its life.Food plentiful and very tasty and brown bread to die for the best .Staff what can i say courteous,friendly and extremely pleasant.All of the above made for a great break in these difficult times so thanks to each and every one of you

Dear Guest
Thank you for your review of your recent stay, I am delighted that the team made you feel safe and that you felt well looked after whilst at The Westlodge. We hope to have the pleasure of welcoming you back again in the near future.
Very best wishes
Mark Golden
Operations Manager.

Report response as inappropriateThank you. We appreciate your input.
This response is the subjective opinion of the management representative and not of TripAdvisor LLC
X-D12345678
Cork, Ireland
11
Reviewed 4 October 2020
Wedding complaint.

The young ginger haired girl (I didn't catch her name) working the night of 03-10-2020 as a barmaid in the function room.
The insufferable abuse she had to deal with from a guest who, prior to her arrival on the scene, could be heard saying to another guest that she was going to make an "example" of her. I was standing nearby. A small amount of Johnny Walker was spilled on the guests dress, purely an accident she hardly poured it over her head, and all hell broke loose. Friend of the aggrieved party rushed to her aid and demanded a manager to discuss the spilled drink. Told the poor girl in rather a threatening manner that he would discuss this either tonight or in the morning with higher management.
Our heroine kept her cool, listened to their concerns and apologised, the absolute best that could be done considering the incident that had occurred.
The aggrieved party were too drunk to see sense, however she remained calm and courteous throughout.
As I have previously mentioned I did not catch her name, but she deserves to have a 20 minute uninterrupted rant about the proceedings.
Kudos on the cool head in the face of ignorance though! Very impressed.

Dear Guest,
Thank you for one of the more interesting reviews I have read in many years as I thought with its heading it was a negative review when in essence it was an advisory. Olivia is indeed a very diligent and hard-working employee and I thank you for your comments on her. Accidents do happen, of course, this is life and we have all been at either end of the situation. We look forward to welcoming you again and hopefully the next time without incident!
My very best wishes
Mark Golden
Operations Manager

Report response as inappropriateThank you. We appreciate your input.
This response is the subjective opinion of the management representative and not of TripAdvisor LLC
Elsie5
County Limerick, Ireland
8051
Reviewed 28 September 2020 via mobile
Enjoyable Stay

Nice location on outskirts of Bantry. Food in the restaurant was beautiful. Staff fantastic. Special shout out to Sophie in the leisure centre. Fairy trail on grounds for little ones. Probably could do with a little refresh. Can hire rackets for tennis and there's a pitch and Putt course on site. There's is also a hairdressers but I didn't utilise so can't comment. Stayed in the cottages. Very clean. Spacious bedrooms. TV area and kitchen small but fit for purpose.

Dear Guest
Thank you so much for taking the time to post such a lovely review, you are correct the Fairy trail does indeed need a refresh and is on next weeks list for updating, it had a busy summer with the little ones! We hope to have the pleasure of welcoming you again soon.
Our very best wishes
Mark Golden
Operations Manager.

Report response as inappropriateThank you. We appreciate your input.
This response is the subjective opinion of the management representative and not of TripAdvisor LLC
Tadhg S
41
Reviewed 19 September 2020 via mobile
Good location

Visit here to visit a family member. Not far from the town of bantry. Nice comfortable bar with a nice fire. Breakfast was good. Room was lovely and comfortable. Enjoyable stay overall. Visited the gym , good range of machines.

Dear Guest,
Thank you for taking the time to post your review, we are glad that you felt well looked after. We hope to have the pleasure of repeating the performance.
Very best wishes
Mark Golden
Operations Manager

Report response as inappropriateThank you. We appreciate your input.
This response is the subjective opinion of the management representative and not of TripAdvisor LLC
Thewhitelady
Banbridge, United Kingdom
1624
Reviewed 17 September 2020 via mobile
Great all round hotel

Had a 2 night stay, staff helpful but not in your face. Room was very clean, bed very comfortable, good air con. No worries about noise. Breakfast was very good with quality produce. Gym was small, basic but adequate. Pool looked very good especially for kids but we didnt get a chance to use. Has lots of other facilities that we didn't get to use but looked good- pitch & putt, fairy trail, sauna.
Very close to Bantry Bay, 10minute walk.
Overall a great experience for exceptional value.

Dear Guest,
Your review has been greatly received by the team here and I would like to convey our thanks. We hope to welcome you back in the near future so you can avail of all the amenities.
Very best wishes
Mark Golden
Operations Manager

Report response as inappropriateThank you. We appreciate your input.
This response is the subjective opinion of the management representative and not of TripAdvisor LLC
View more reviews
PreviousNext
123…60