Sheen Falls Lodge
Sheen Falls Lodge
5 people are viewing this hotel
Lock in the lowest price from these sites
US$524
US$499
Free cancellation until 21/05/22
View deal
Expedia.comUS$506
Hotels.comUS$506
PricelineUS$499
TravelocityUS$506
Trip.comUS$501
HurbUS$524
View all 16 deals
Payments made by partners impact the order of prices displayed. Room types may vary.
Prices are provided by our partners, and reflect nightly room rates, including all taxes and fees known to our partners. Please see our partners for more details.
DayTrip539816
1

We were privileged to stay at The Sheen Falls in their beautiful Villa Verde for our daughters wedding in Kenmare. The service we received from all the team was second to none and is without doubt one of our best ever customer service experiences to date, in any five star hotel.

See all 1,386 reviews
Payments made by partners impact the order of prices displayed. Room types may vary.
Nearby Hotels

The Lansdowne Kenmare
US$265
Booking.com
View deal
Expedia.com
US$269
Hotels.com
US$269
Priceline
US$265
View all 13 deals from US$265
60 reviews
1.3 km from Sheen Falls Lodge
We compared the lowest prices from 13 websites 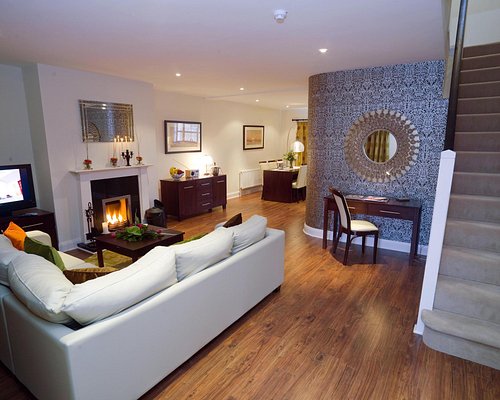 This is a beautiful hotel,,spacious and tastefully designed.
The rooms are large and the lake view is fabulous.
We enjoyed the breakfasts and the excellent service,the staff were professional and welcoming.
We enjoyed a 4 night stay and found the hotels location was ideal for visiting the surrounding sites of interest.

This review is the subjective opinion of a Tripadvisor member and not of TripAdvisor LLC.
lizleech
Holmes Chapel, United Kingdom
5263
Reviewed 8 September 2021 via mobile
The perfect stay!

We just had one night here but needed at least 3. This was the most perfect stay in every way. A truly wonderful hotel , a fabulous room overlooking the falls, wonderful dining experience and the most relaxing part of our tour around Ireland. You could say, well you’d expect all that from a 5 star hotel and maybe so, but this was even beyond what we expected. Such a smooth operation on every front and made perfect by the wonderful staff in all areas. From the minute Brian welcomed us outside the entrance, we knew this was going to be a gem… thank you to each & every one of you.!

This review is the subjective opinion of a Tripadvisor member and not of TripAdvisor LLC.
marieR5760IE
Cork, Ireland
247
Reviewed 8 September 2021 via mobile
Wonderful Sheen Falls

Wonderful stay in Sheen Falls, we stayed in a clsssic room on a 3 night package. Staff excellent, hotel stunning. A 5 Star breakfast & the food in the main restaurant is really good. Would like if they updated their lounge menu for dinner. Went to the Spa, big shout out to Nikki & the rest of the team I had a fabulous massage! Thank you we can’t wait to return!

This review is the subjective opinion of a Tripadvisor member and not of TripAdvisor LLC.
Rosemary044
Dublin, Ireland
2619
Reviewed 6 September 2021
A warm welcome at the Sheen Falls hotel

Prior to arrival I had to contact the hotel because of a number of changes I was making on our side, I would like to thank Agniesz Bartus in Guest Services and Bakarne Aristondo Sanz in reservations for their helpfulness and courtesy.

On arrival we were given a welcome drink before going to our rooms, we were very lucky to be staying in superior deluxe rooms with views of the waterfall. They are spacious rooms, very comfortable bed, separate sitting area, good sized desk for working at and good quality tv. Bathroom had bath and shower,

The grounds are immaculate , well maintained garden and there are lovely walks on the estate and by the river.

We used the spa and again we were treated with courtesy and felt that all the right precautions are in place for Covid 19.

On our first night we dined in the Falls restaurant. The food and wine were both excellent and the service friendly and courteous. Jim on the piano, who could play everything requested and more, only added to the pleasure.

Our last night we had our dinner more casually in the lounge, this too was relaxing and very good.

Final details,
A very pleasant library
Nice outdoor areas to sit or have light lunch
Cleanliness in the rooms and turn down service all as you would expect
There are other activities on the Estate and free use of bicycles, a swimming pool and as reported by one of our party a well equipped gym.

Thank you to all the team for making our break so memorable. We will be back

This review is the subjective opinion of a Tripadvisor member and not of TripAdvisor LLC.
LeGenerale
Northeast
245167
Reviewed 30 August 2021 via mobile
Bring your own food

Here’s the good news: We had room 160, which is among the more beautiful rooms we’ve stayed in.

Here’s the bad news: The quality of the food runs from good to “Are you kidding?” When we both ordered scrambled eggs for breakfast, we noticed that the eggs on the two plates were different colors: one yellow and the other orange-yellow? Different hens? No. One was from eggs and the other was from a scrambled egg mix (verified by our server).

Then there’s the orange juice: freshly poured from something akin to a Tropicana carton as opposed to freshly squeezed.

Dinner was equally disappointing. We had booked two dinners at the Falls Restaurant, but cancelled the second after a poor meal the first time around. We ate our three other dinners at Mulcahy’s, No. 35, and Anois in Kenmare, all of which were far superior.

Oh yes, we had a working fireplace in our room, which was quite nice to have. But after we exhausted the wood on hand, it took three requests over two days for replenishment before someone brought a new supply and all but extended his hand for a tip.

That said, the staff was always polite and verbally accommodating, but the shortfalls, which we have also reported to Relais et Chateaux, are not acceptable when the room rate is $1,000+ per night.

Our visit to Sheen Falls followed four days in Dublin at the Merrion Hotel, which was flawless. Sad to say, Sheen Falls was anything but.

LeGenerale,
Thank you for taking the time to write about your recent stay with us. I am sorry to read that during your stay with us, there was a number of short falls that you shouldn't have experience and I do apologize for this.
I appreciate your comments regarding the some of the food items you mentioned but I can assure you our Head Chef and the Kitchen team only use the highest quality ingredients with most of them locally sourced. Unfortunately there was a miscommunication regarding the eggs between the kitchen team and your server which was then passed onto you. It would be terrible for you not to know how proud we are to work with local producers such Forest Farms who are based in Waterville, (just 1 hour from the hotel). To give you an example of this produce, for our Egg Dishes such as Scrambled Eggs, Poached Eggs & Omlettes..etc we use 100% free range eggs from Forest Farms. Under advisement from the Food Safety Authority we do use a high quality Pasteurised Pure Egg Yolk Liquid for egg based sauces such as Hollandaise.
We are very fortunate to be based close to a great town like Kenmare and I am delighted that you got to experience some of the great food offerings available in Kenmare.
Hopefully we will get the opportunity to welcome you back to us in the near future and that you will get to experience more of what our team here can offer.

If I can be of any further assistance, please do not hesitate to contact me at
guestservices@sheenfallslodge.ie

Report response as inappropriateThank you. We appreciate your input.
This response is the subjective opinion of the management representative and not of TripAdvisor LLC
View more reviews
PreviousNext
1…789…