US$134
US$132
View deal
Booking.comUS$131
PricelineUS$131
Hotels.comUS$132
TravelocityUS$132
Trip.comUS$134
Orbitz.comUS$132
View all 15 deals
Payments made by partners impact the order of prices displayed. Room types may vary.
Prices are provided by our partners, and reflect nightly room rates, including all taxes and fees known to our partners. Please see our partners for more details.
Noinamname
Hong Kong, China
4855

The hotel is around 10 mins walk from the train station and around 15 mins walk from supermarket. It is in the quiet area not many people during the summer time. Breakfast had not much things but hotel staff was so nice, friendly and helpful. View from my room was so lovely. More

Dear guest,
Thank you so much for your feedback! I was truly glad to read you enjoyed your stay with us and that you appreciated our teams. Our goal at Hotel de la Foret is for every guest to have a memorable experience.
We sincerely look forward to welcoming you back soon! Best wishes,
Julien Mirguet

Report response as inappropriateThank you. We appreciate your input.
This response is the subjective opinion of the management representative and not of TripAdvisor LLC
See all 136 reviews
Payments made by partners impact the order of prices displayed. Room types may vary.
Nearby Hotels 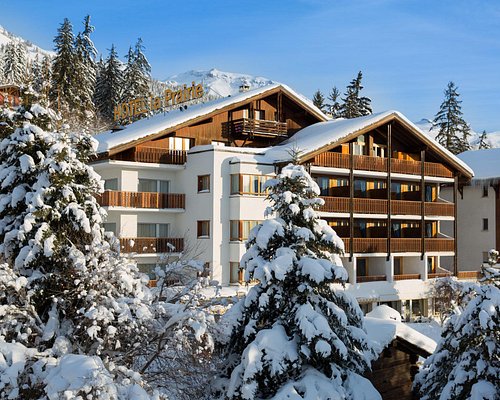 Expedia.com
View deal
Free cancellation
Pay up to 12X
Booking.com
US$135
Priceline
US$135
Hotels.com
US$136
View all 15 deals from US$135
344 reviews
1.5 km from Hotel de la Foret
Special offer
Special RateSpecial rate available
We compared the lowest prices from 15 websites

Expedia.com
View deal
Reserve now, pay at stay
Booking.com
US$703
Travelocity
US$705
Priceline
US$703
View all 15 deals from US$703
455 reviews
2.7 km from Hotel de la Foret
We compared the lowest prices from 15 websites
Breakfast included
chetzeron – hotel
US$449

I came to this hotel for 5 nights to participate on the Omega European Masters. Room was nice, however breakfast the worst I ever had. Breakfast hours were between 7 and 10 am, however if you get at the restaurant after 9 most of the things were already gone and they weren't replaced. First day there was no cider, no milk and no ham. Asked the waiter and he was kind enough to bring that. Scrambled eggs were terrible. Second day asked for fried eggs, which he did bring 2 fried eggs. The following morning I asked for fried eggs again, as the scramble eggs were not eatable. They were absolutely just liquid. His answer was that I couldn't have fried eggs as the cook has already left for the day. This was around 9:15. The following morning I went to the restaurant at 9 o'clock and I was lucky enough because the chef was still there and I could have the fried eggs. On my fourth morning went for breakfast at09:15; there wasn't no sausages, beans, cold cuts and no coffee. Once again asked for eggs as the scramble ones were not eatable at all as you Will be able to see the photos. The waiter apologies and said that the chef was already gone. I asked him if breakfast wasn't from 7 to 10? He said yes but he was gone. Asked to speak with the Manager which happen to see also the owner. I asked her to come with me to the breakfast buffet and to let me know if it was ok as most of the items were missing. Also showed her the scrambled eggs and asked her if she thought they were eatable? She said I think so. I said well to me that is not acceptable. Sh was very rude, arrogant and despite apologizing she told me that I have chosen the wrong hotel.
When you receive an answer like this from a Hotel Manager and also owner, what else can you say? Not too much. Also wifi very, very poor.

Good Afternoon,
It was with great attention that we read your comment. The opinion of all our guests is very important for us because it allows us to constantly improve the quality of our services.
However, we would like to point out that in this case, the reality is quite different and you know it!
We kindly warned you that we do not offer a la carte service. The first two days our chef was there and to please you we prepared eggs.
The week we stayed, the hotel was full and we had over 100 guests. Do you really think that we let the buffet not reasortit?
When you came on the last day at 9:45am (the end of the breakfast being at 10:00am) it might be missing some of ham for two minutes, and you found it "unacceptable". On the other hand when you allowed yourself to criticize my collaborators, you have exceeded the limits! So stop lying on the forums and review your behavior!
We remain at your disposal.
Best regards.

Report response as inappropriateThank you. We appreciate your input.
This response is the subjective opinion of the management representative and not of TripAdvisor LLC
chawa641
Paris, France
11
Reviewed 29 February 2016
A charming hotel

We had a really nice stay at the Hotel de la Foret last weekend. The room was cute with a wonderful view on the mountains. The staff is very friendly and helpful. We were impressed by the quality and originality of the food. easy access to the slops.

This review is the subjective opinion of a Tripadvisor member and not of TripAdvisor LLC.
Latikaam
Mumbai, India
174
Reviewed 3 December 2015
Quaint & pleasant

Well located in Montana. Quaint hotel. Decent rooms with clean linen. Receptionist Charlotte was very helpful & friendly. Nice hotel for 2-3 days. Bathrooms are small but neat. All in all.. quite a nice hotel.

Dear Latikaam, Thank you for your kind review! Our customers’ satisfaction is very important to us, we are therefore pleased to know you enjoyed your stay with us. We strongly hope to welcome you again very soon! Warmest Regards,

Report response as inappropriateThank you. We appreciate your input.
This response is the subjective opinion of the management representative and not of TripAdvisor LLC
kattiris
Nicosia
6874
Reviewed 5 September 2015
An amazing place with excellent service and great Alpine view

I have just returned home after 5 fabulous nights spent at this magical hotel. From the moment i checked in to the moment that i checked out everything went very smoothly and this hotel, its staff as well as its value for money had exceeded all my expectations. Mme Albertine and her staff were truly amazing in all areas of the hotel, the room was extremely clean and had anything that i needed, the view from the room and the restaurant was magical, the free parking and free wifi were highly appreciated and last but not least the breakfast at the restaurant was great with lots of fresh items to choose from. Thank you very much everyone for a great experience! I shall definitely return and this time i will bring the rest of my family with me :)

Dear Kattiris, We are very happy to hear that you enjoyed your stay with us. We would be delighted to welcome you again with your family for the ski season! The whole team of the Hôtel de la Forêt wishes you all the best. Kind regrds.

Report response as inappropriateThank you. We appreciate your input.
This response is the subjective opinion of the management representative and not of TripAdvisor LLC
minkusmum
Montreux, Switzerland
6546
Reviewed 29 May 2015
Unexpectedly good.

Many hotels had not yet re-opened for the summer, but this one remains open all year round. One of the ways they can do this is by reducing the number of staff, meaning that one person is responsible for the front desk, the bar and any customer requests etc. This sounds like a recipe for disaster, but the girls we saw seemed to be able to be in several places at once and to answer all questions with friendliness and ease in several languages. The only disadvantage was that the restaurant was not open, but we were given several suggestions for alternatives.

The hotel itself was very well decorated and appointed, so it felt a cut above a standard 3 star, especially in the public areas. We chose a room with a mountain view, which had a big balcony outside where you could sit and enioy the birdsong coming from the trees behind the hotel. The room itself was not huge, but a very big mirror over the bed made it feel bigger.

Breakfast was a standard buffet, but the croissants were outstanding! A notice said that the staff would provide sandwiches for lunch if requested.

This is one of the nicest places we have stayed recently, so we may well be back.

Room tip: Get a room with a mountain view. It's worth paying extra.
Ask minkusmum about Hotel de la Foret
Thank minkusmum