Was just ok compared to others - Review of Hotel Aquamarina

Hotels.com
Travelocity
Orbitz.com
View all 13 deals
Prices are provided by our partners, and reflect nightly room rates, including all taxes and fees known to our partners. Please see our partners for more details.
Payments made by partners impact the order of prices displayed. Room types may vary.
loriwhitwell
Hamilton, Canada
3627

Was just ok compared to others

Review of Hotel Aquamarina
Reviewed 19 May 2012

We found hotel by driving by, it was 85euro a nite, and it should have been more like 60euro. internet was so difficult to get on, she kept saying it was easy, but it wasn't, when you went up one floor to your room, you lost the wifi signal. so i sat in the lobby to get on the net . rooms are very dated... needs paint for sure, but it was clean... she had a dog that was really cute, and we missed ur dog so that was a nice thing to play with. you could walk to the town shopping street, yes, there was a lido restaurant up abt one block that dinner was amazing. the rooms were noisy, no views, and the Breakfast was terrible, dry bread, jam and older fruit, no meat or cheese, i know its included, however we have been driving italy for two weeks now and when paying 80 or more you can usually get some better food in the morning.

i would say if your stuck, then stay here, if yoy can look around find another place.... 85 E was way too much !

Show less
See all 47 reviews
Payments made by partners impact the order of prices displayed. Room types may vary.
Nearby Hotels 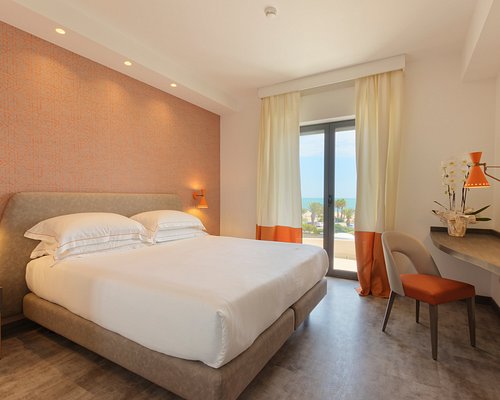 The hotel is located in the very center of the town and very close to the sea. Each and every noise produced in the building can be heard into the room even with a closed door: the acoustic insulation is almost non-existent. Rooms are cleaned according to the mood of the roomboy. It should not be difficult to solve the little sloppy things which are not right in each room (let's say 15 minutes per room?) but nobody seems to care e.g. if lots of dust is on the lamp just beside the bed. Italian breakfast is fresh and tastes above the average for this kind of pension. Overall you really get what you paid for, in a very comfortable location in the town.

This review is the subjective opinion of a TripAdvisor member and not of TripAdvisor LLC
Hesmo
Harrogate, United Kingdom
18870
Reviewed 24 March 2010
A reasonable place to stay

This is a reasonably priced family run hotel with no great pretensions. Its fair to say there are parts of the hotel in need of repair or repainting - but overall its a pleasant place to stay. My only complaint would be that we travelled off-season and found that - on arriving late, we had no help from staff in either feeding us - the restaurant wasn't open after 9pm, or assistance in finding a restaurant. Citanova looks like its probably a great place to stay in season if you like clothes shopping..but don't expect a wide choice of good restaurants.