US$181
View deal
eDreamsUS$184
Hotels.com
Travelocity
View all 14 deals
Prices are provided by our partners, and reflect nightly room rates, including all taxes and fees known to our partners. Please see our partners for more details.
Payments made by partners impact the order of prices displayed. Room types may vary.
vallarta001
Grand Prairie, Texas
1926

No question that the view from the hotel grounds is magnificent. That’s were the praise stops. The same food finds it’s way to the breakfast buffet and dinner salad bar each day. What is fresh and what is reused is a subject of concern. None of the prepared food is prepared properly and for the most part is inedible. We elected to go out for dinner, even though we had prepaid meals. The meal service was atrocious, dirty dishes accumulating on the tables and dinner courses arriving only after you had lost your appetite waiting. The hotel is clearly lacking good management and is in dire need of upgrade. Ants infest the rooms, only to return after housekeeping responds to being informed of the infestation. Our 10 day stay was extremely disappointing. My suggestion is to find a different hotel for your stay on Elba.More

Show less
Trip type: Travelled with friends
See all 934 reviews
Payments made by partners impact the order of prices displayed. Room types may vary.
Nearby Hotels 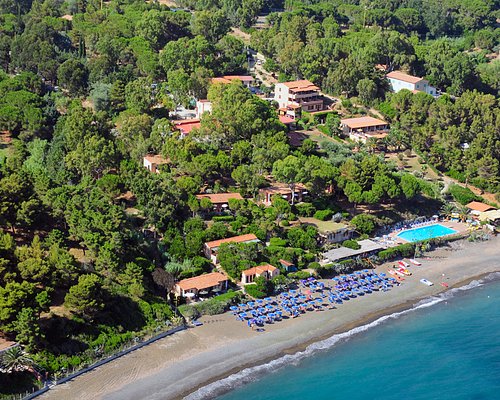 Beautiful location! The hotel is worn, so an upgrade would be recommended.
Breakfast is ok, but most of the food is usually empty a half hour before closing.

The private beach is wonderful, except from the lifeguard who does not like children.
Always plenty of sunbeds available when we were there.

We had a great time, we had a nice, clean room with seaview and a balcony. Pool area is also nice!

This review is the subjective opinion of a TripAdvisor member and not of TripAdvisor LLC
AG70IT
Lesmo, Italy
419204
Reviewed 15 May 2019
incredible view, good food, outdated rooms

We had a large family room near the pool. It was a bit outdated but comfortable. Very basic furniture, old steel window frames, no mosquito nets. The sealing on the side of the shower panel in the hot tub was clearly in a poor state and after every shower the floor got quite flooded...

We opted for a half board package and it was a good choice as there are no restaurants at walking distance. Driving your car to Capoliveri is a challenge in terms of parking it not a mile away from downtown. Food was ok, always a large choice of starters, a rich salad bar and then a daily menu. It is not over the top or extraordinary though always tasty.

The view from the hotel is magnificient, you can admire the entire bay and it is simply breathtaking at sunset. Enjoy it by the pool!

The hotel has a private beach at no extra cost. It is not really a beach rather a set of stilts and platforms built down the cliff around a very tiny docking area with sand and a small bar. It is quiet and you can always find a spare chaise longue and a light breeze will refresh you all day long. It is either a 15min walk up and down few hundreds of steps from the hotel down to the platform / beach area or you can use a private elevator, pretty neat!

There is a snorkeling area all along the structure and you can enjoy fishes and even starfishes. The negative aspect is that it is in a secluded bay and the main docks are on the other side of the bay with hundreds of boats. Depending on the tide, you should expect some not perfectly clear water in the afternoon, or even dirty opaque. It is usually crystal clear in the morning.

There is a taxi boat service from the hotel to Capolivery at the docks, at cost. It works well to go to restaurants and bars downtown as well as to reach the peer and rent a small boat for the day. Make sure you reserve in advance!

There is a rooftop bar and they offer live music during the week end.

We really enjoyed our stay and we may consider going back in the future.

This review is the subjective opinion of a TripAdvisor member and not of TripAdvisor LLC
mpgm63
Dublin, Ireland
5227
Reviewed 27 March 2019 via mobile
Excellent

Superb reception and easy check in. Greeted with a glass of champagne!
Room all that you could wish for with a wide terrace and stunning sea views. Beautiful indoor and outdoor pools. Excellent bar service.
Breakfast was buffet except for the hot dishes that were made freshly for everyone.
Spa very good. We will be back!

This review is the subjective opinion of a TripAdvisor member and not of TripAdvisor LLC
Nikett
Moscow, Russia
6033
Reviewed 9 October 2018
Wonderful view

The room with sea view is big and really has the amazing view. There are no tea set and slippers in the room but you can get it very fast if you ask at the reception. Sometimes Wi-Fi was slow.There are two swimming pools with seawater. Big parking. Two ways to the private beach: scale and elevator. There are a bar, sunbeds and umbrellas at the beach. Breakfasts are rather good: hot dishes (scrambled eggs, bacon), cold appetizers (sausage , ham and cheese), cakes, yoghurts, drinks. Not many vegetables for breakfast. Wonderful view during the breakfast. The staff is nice.

This review is the subjective opinion of a TripAdvisor member and not of TripAdvisor LLC
AlastairJ460
Royal Tunbridge Wells, United Kingdom
4545
Reviewed 29 September 2018
Sadly disappointing

The reviews on this hotel are a very mixed and it was hard to see the wood from the trees when we booked but we felt that, on balance, it looked a good bet. Sadly, we got it wrong.

The hotel is tired and feels a little bit like a utilitarian Russian hotel built in the 1960’s, lacking in any charm or sophistication. The front desk put on a great service against all odds but management seem to have lost their way here. The noise levels in the rooms are mentioned elsewhere and yes, the screaming baby above was going to ruin our holiday so we requested a room change, which we did get.

The bed was so hard that I ended up sleeping on the sofa for the last two nights and the lack of tea or coffee making facilities was a real bore, especially as other comments here bemoan the poor coffee at breakfast.

Breakfast has been an issue with many reviewers and we agree wholeheartedly with this opinion: in a country with such fabulous fruit, serving tinned pineapple and tinned pears for breakfast is rather shabby. Almost all the breakfast items were pastries so as a coeliac, I was reduced to eating eggs and bacon, yoghurt and fruit every day. There was nothing else.

Our stay coincided with a group of rally drivers taking over the hotel and the revving of engines at midnight at the front of the hotel was particularly distressing as management had allowed them to park there in the first place, when the rest of us had to park in the car park at the rear. No action was taken to stop them and the outcry the next day was visible in the frustrated staff on the front desk.

The views, beach, funicular and front desk have been mentioned many times and they are great but do not justify the four stars. We were really looking forward to our stay but came away feeling sad that this hotel had so much potential which has been squandered. I would try somewhere else...