The Worst Hotel in Oman - if not the... - Review of City Centre Hotel

US$52
View deal
Free cancellation until 30/04/21
Reserve now, pay at stay
Expedia.com
Hotels.com
Travelocity
View all 11 deals
Prices are provided by our partners, and reflect nightly room rates, including all taxes and fees known to our partners. Please see our partners for more details.
Payments made by partners impact the order of prices displayed. Room types may vary.
Kevin H
Dubai, United Arab Emirates
12351

The Worst Hotel in Oman - if not the Gulf

This place is horrendous. I can confidently say the worst place I have stayed in during the 16 years I have lived in the Gulf.
How it has not been closed down by the health authorities is beyond me.
Haphazard check in process and then shown to Room 212 which had enough mould on the ceiling to maintain an immediate visit from the Environmental Health body.
Moved to Room 213 - slightly less mould - still a health hazard. Complain again - offered a smoking room that stinks.
It is now late so hedge my bets and risk the less mouldy room - that has broken chairs; a security lock that has been ripped off; electrical fixtures that are hanging off and a TV that shows channels no one wants to watch - have they heard of MBC/OSN - and two English news channels that were totally corrupted.
One solitary towel in the bathroom - and naturally no spoons or utensils for tea.
Breakfast was a shambles as well.
And they had the nerve to charge over 100 USD a night.

Absolutely appalling and I will be telling the travel agent who booked it for me to take it off their list of properties immediately.

Asked for a taxi in the morning - came down to check - no one at check out or reception and managed to get one myself on the street.

Report response as inappropriateThank you. We appreciate your input.
This response is the subjective opinion of the management representative and not of TripAdvisor LLC
See all 40 reviews
Payments made by partners impact the order of prices displayed. Room types may vary.
Nearby Hotels 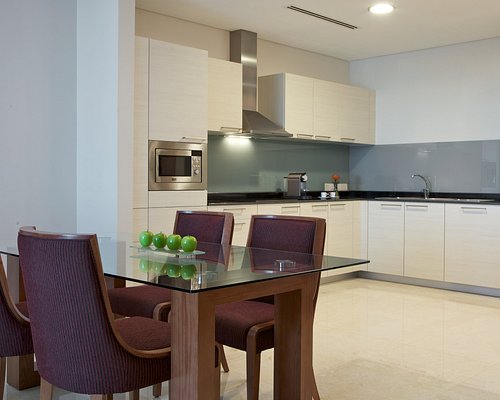 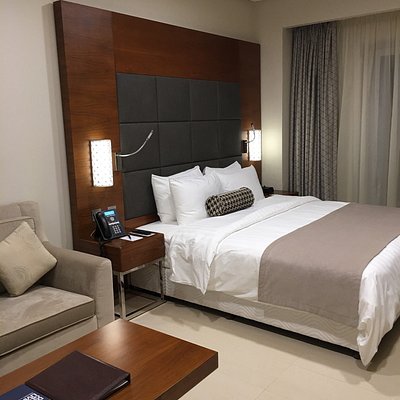 Expedia.com
View deal
Free cancellation
Pay up to 12X
Hotels.com
US$107
Trip.com
US$82
getaroom.com
US$126
View all 17 deals from US$82
393 reviews
16.3 km from City Centre Hotel
We compared the lowest prices from 17 websites 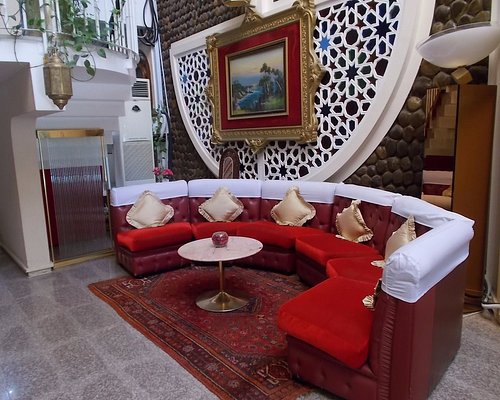 Expedia.com
View deal
Reserve now, pay at stay
Hotels.com
US$71
Trip.com
US$36
Agoda.com
US$43
View all 12 deals from US$36
70 reviews
17.2 km from City Centre Hotel
We compared the lowest prices from 12 websites
Swiss-Belinn Muscat

Travelocity
View deal
Orbitz.com
Trip.com
US$64
Hotels.com
US$69
View all 11 deals from US$64
6 reviews
10.1 km from City Centre Hotel

Hotels.com
View deal
Pay up to 12X
Agoda.com
US$50
Expedia.com
US$53
FindHotel
US$66
View all 16 deals from US$50
489 reviews
5.4 km from City Centre Hotel
We compared the lowest prices from 16 websites
Centara Muscat Hotel Oman
US$65

Expedia.com
View deal
Free cancellation
Pay up to 12X
Hotels.com
US$65
Agoda.com
US$58
FindHotel
US$80
View all 16 deals from US$58
581 reviews
12.4 km from City Centre Hotel
We compared the lowest prices from 16 websites
Great value today
Breakfast included
La Rosa Hotel
US$45
US$23

Had to stay there with my family; as it was close to my residence; some work was going on at my home. The rate that I got was very good for the room. But I regret staying there; as the hotel rooms are in terrible shape; just pathetic. wallpaper is coming off; not enough light in the room; phone wasn't working; not enough light in the bathroom; just terrible.

We regret the Inconvenience caused during your stay with us. We did change our self in the Past Months. It is changed Hotel Know with the difference. If you are in Oman you can visit us and see your self the difference. .

Report response as inappropriateThank you. We appreciate your input.
This response is the subjective opinion of the management representative and not of TripAdvisor LLC
rajanikanth224
Hyderabad, India
2820
Reviewed 3 January 2017
Never ever, ever again

Very poorly maintained, poorly organized, definitely not a place to spend your money. Asked for the airport drop. They obliged with a warning that I should report at the exact time for the airport drop, else it would be cancelled (in spite of charging extra for the drop). I reported 10 mins before the said time, but the car driver was not to be seen for a full 30 mins. Finally the driver appeared from the hotel's kitchen eating a huge a sandwich which he continued eating with one hand, all the way while driving. The rear seat of the car was full of his stuff, so I was asked to sit in the front. It looked like a private car used to make extra buck. All I can say is, at the end I was glad to leave the place.

We cannot Imagine what was going on. We Regret it we make sure nothing of this sort ever happen in Future. All we can say is We have improved our self from what we are. In case you happen to visit Oman. We are here to show the difference,

Report response as inappropriateThank you. We appreciate your input.
This response is the subjective opinion of the management representative and not of TripAdvisor LLC
SurendraSharma
Jaipur, India
6468
Reviewed 21 September 2016
Pathetic Hotel...Don't even think to stay here

Only plus point is friendly staff....they are ready to help you with all available infrastructure but there is no infrastructure. Though the hotel is well located next to City Center but not at all maintained. It seems that it is in hand of unprofessional management. They don't even have GM, F&B Manager, House Keeping Manager or Chef. They serve all ready to cook food in the breakfast. No hand towels, face towels in the room. No proper tea/coffee set-up, no DTH only local TV channels. Torn and dirty chairs in the room, seepage everywhere. Dirty cars for transfers. Overall just avoid this hotel.

This review is the subjective opinion of a TripAdvisor member and not of TripAdvisor LLC
jamesbyronding
12936
Reviewed 27 August 2016
Nice clean hotel.

Booked half a day at this hotel, because arrives very early in Muscat, and need to attend an event near the airport. Nice clean room. Nothing fancy. A bed for me and my colleagues to catch an extra few hours of sleep before starting our day at work!

This review is the subjective opinion of a TripAdvisor member and not of TripAdvisor LLC
guesswho2019
Chennai (Madras), India
75
Reviewed 23 August 2016 via mobile
Disappointing stay

Cons: smelly, badly maintained, rooms door locks don't work, my room walls damp, below average service. The breakfast served variety is decent but quality us poor. I would suggest taking a room without the breakfast package and save money.