US$83
US$74
View deal
SAVE US$9
Hotels.comUS$80
Expedia.comUS$80
HurbUS$83
View all 16 deals
Prices are provided by our partners, and reflect nightly room rates, including all taxes and fees known to our partners. Please see our partners for more details.
Payments made by partners impact the order of prices displayed. Room types may vary.
cliff_taylor2
Stafford, United Kingdom
216108

Long time getting around to this review, busy Covid times eh!
I stayed at this place during early lock-down as classed as a key worker, very well managed place regarding social distancing, when checking in, felt safe. Strange times as room service only for food due to restaurant being closed at the time. The really annoying bit was the inconsiderate gardener, hot weather at the time so my window was open, a petrol mower was used right outside my room before 6-30 in the morning! would not stay there again.More

Thanks for the stay and feedback. I am happy that you felt safe with us and the you found the staff accommodating. On the other hand, I am sorry to hear about your dismay towards the limited service and the level of noise from the gardener. I have taken note of your comments and shared them with management for review to take necessary actions to address these concerns.

I hope you give us a chance to host you again in the future.

Report response as inappropriateThank you. We appreciate your input.
This response is the subjective opinion of the management representative and not of TripAdvisor LLC
See all 487 reviews
Payments made by partners impact the order of prices displayed. Room types may vary.
Nearby Hotels 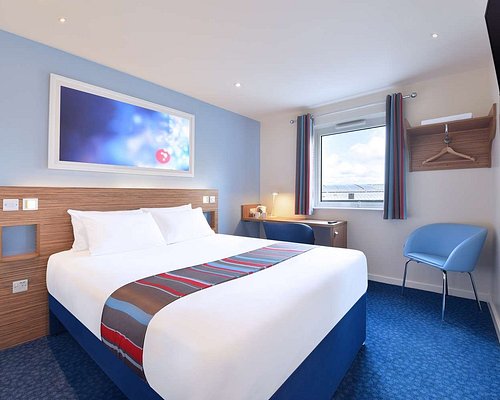 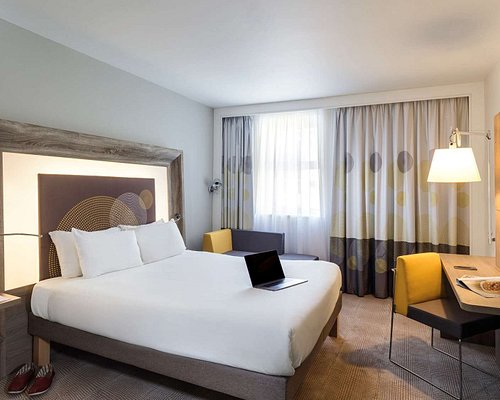 Priceline
View deal
Free cancellation
Booking.com
US$70
Hotels.com
US$70
Expedia.com
US$70
View all 16 deals from US$70
1,122 reviews
4.9 km from Holiday Inn Ipswich-Orwell

Hotels.com
View deal
Orbitz.com
Agoda.com
US$31
Expedia.com
US$38
View all 16 deals from US$31
155 reviews
5.1 km from Holiday Inn Ipswich-Orwell

Expedia.com
View deal
Free cancellation
Pay up to 12X
Priceline
US$61
FindHotel
US$59
StayForLong
US$65
View all 15 deals from US$59
686 reviews
8.9 km from Holiday Inn Ipswich-Orwell
We compared the lowest prices from 15 websites
Pentahotel Ipswich
US$70

We chose this Holiday Inn when we were visiting the Essex/Suffolk coast as it gave easy access to both.

The only downside was that it is located between 2 busy roads so was a bit noisy, nothing that ear plugs didn’t sort out tho.

The hotel was very clean and tidy and the staff courteous and friendly. We chose a room with a king size bed, and yes it was 2 singles pushed together (pretty normal these days) but it was comfy and didn’t affect our sleep.

We didn’t eat in the hotel, choosing instead to eat at the Brewers Fayre - a 5 min walk away, and had breakfast at the Toby Carvery, 10 mins away.

Well placed for road connections, we would def use again if in the area

This review is the subjective opinion of a TripAdvisor member and not of TripAdvisor LLC
StewartB126
Marsham, United Kingdom
168
Reviewed 27 July 2020
Top class staff

The staff we met were absolutely fabulous. The ladies on reception Laura and Mandy were lovely and welcoming. Diane served us breakfast and could not do enough for us even after I threw my tea all over my full English. A special thank you to Kayleigh who made our stay a delight. she was so friendly and went out of her way to make sure we had everything we needed. Please pass on our thanks to all your staff for an enjoyable couple of days . we will definitely return when we are next in Ipswich

When looking for a hotel in Ipswich, the Holiday Inn Ipswich was cheaper than this hotel, however I chose this one as they had king rooms and it looked nicer. This was a mistake.

Upon arrival we checked into our room which we discovered that our bed was not the king bed I had paid for, the staff had pushed 2 single beds together. We didn’t want to complain so we ignored it but trying to get in bed it was utterly impossible to sleep. The man on reception seemed disinterested but moved us to a room with a double bed saying all the kings were full.

Due to the current COVID-19 situation the hotel were understandably not serving breakfast as a buffet, instead you had to fill in a for, and they would bring it to your room. There were not many options for food, disappointing at £10. I ordered cornflakes as it lacked any of the normal hot food (except bacon and sausage baps) and a chocolate muffin. Upon opening the muffin they had sent blueberry instead and it was the same as the mini muffins you can buy in packs of 20 from any supermarket. Did not feel worth paying for at all.

Walls between rooms were very thin, but this did provide us entertainment as the couple next door seemed to be having an argument worthy of a soap opera. But I can see how this lack of peace and quiet could bother most people.

Be warned the rooms have no A/C and the fans provided only produce noise. As per normal holiday inn standard, windows only open 2 inches

Over all the staff in general were nice enough and still pleasant despite how weird everything must be right now, but the hotel was definitely lacking in things

Thank you for your stay and for taking the time to leave us feedback.

I am sorry to learn about the issues encountered with the bed type allocation during your visit. Along with what you shared about your breakfast experience, I have shared your comments with the hotel management. I trust that the actions that will be taken will improve your next stays with us.

I hope you give our hotel another try!

Report response as inappropriateThank you. We appreciate your input.
This response is the subjective opinion of the management representative and not of TripAdvisor LLC
210andyg
Maldon, United Kingdom
51
Reviewed 25 July 2020 via mobile
Very disappointed

I stay regularly at many H/inns around the country for business and because of this I thought I’d get away with my wife for a relaxing weekend. However, this hotel is not up to HInn normal standard. Whist I appreciate this is an older hotel there are many points that disappointed me. Firstly, check in was slow and not particularly friendly- not a real problem. However after returning from an evening meal I stopped at reception to find out if there was any tea/coffee making options for the room (nothing in room even though the COVID note said there would be) The gentleman on reception did not acknowledge we were standing in front of him and kept typing for some time, not even a ‘won’t be a minute sir’ would be nice? He then was not very pleasant and handed a bag with tea bags in and carried on working.
The Bed - the first night we both got into the bed and looked at each other “what’s that smell” ! Pulling back the covers the bed smelt of POO!!! (sorry). As it was so late we decided to take all the covers off and turn the mattress cover over and flip sheet around. It helped but it was still smelly.
Toilet paper - extremely thin and had hills in it all through the roll.
Hot room - one small fan not enough, and windows won’t open more than one inch due to safety.
Very well of and dated room
Not a very good sleep.

Thank you for your stay and for taking the time to leave us a review. We want to ensure every detail of your stay is top-notch and I'm sorry we fell below expectations due to the issues encountered at check-in, the level of service received from our staff, and with the unusual smell of the bedding. I understand this prevented you from having a comfortable stay. We value your feedback and we appreciate you sharing your comments. I have made the hotel management aware of your concerns and I'm confident that necessary steps will be taken to ensure we avoid similar situations from happening again.

We hope you give us another chance to show that your unsatisfactory stay was an exception!

Report response as inappropriateThank you. We appreciate your input.
This response is the subjective opinion of the management representative and not of TripAdvisor LLC
CDP1981
London, United Kingdom
9535
Reviewed 18 July 2020 via mobile
OK

Checked inn and on entering my room it had not been cleaned. During these strange times you’d think this was priority number one to get right!! Reception were very apologetic and moved me straight away but still!!

Thank you so much for staying with us and for taking the time to share your review. While I'm pleased to know you found the location favorable, I was concerned to read that the cleanliness of the first room assigned fell below par on this occasion. We aim to exceed your expectations and I'm sorry for the letdown. I'm glad that our staff was able to moved you to a more acceptable room. I have made the hotel management aware of your comments and I'm confident that necessary steps will be taken to ensure we avoid this from happening again.

I hope you give us another chance and make your next stay with us the best that it can be!

Report response as inappropriateThank you. We appreciate your input.
This response is the subjective opinion of the management representative and not of TripAdvisor LLC
View more reviews
PreviousNext
123…82