Hesehotelli
Hesehotelli
Lowest prices for your stay
Lock in the lowest price from these sites
US$88
Free cancellation until 30/09/21
Reserve now, pay at stay
View deal
eDreamsUS$88
PricelineUS$88
Agoda.comUS$88
TripadvisorUS$88
ZenHotels.com
FindHotel
View all 8 deals
Prices are provided by our partners, and reflect nightly room rates, including all taxes and fees known to our partners. Please see our partners for more details.
Payments made by partners impact the order of prices displayed. Room types may vary.
Kanerva
Tampere, Finland
338257

This is basic hotel at the buss station. Clean and equipped with what's needed (hair dryer, TV, wifi). Upstairs from Hesburger ("a reception" at the burger counter). Some of the rooms have bunk beds. Located at the buss station and quite near railway station, main square and Art Museum within 10-15 min walk. Aurajoki and Turku castle further (2-4 km), but busses also available. Easy to move around the town with scoots.

Trip type: Travelled as a couple
See all 43 reviews
Payments made by partners impact the order of prices displayed. Room types may vary.
Nearby Hotels 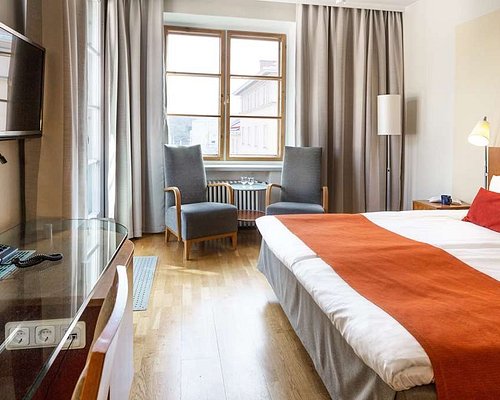 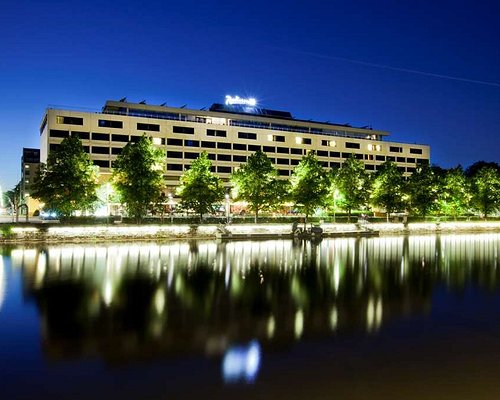 I found this hotel (Hesehotelli Kaskentie) while looking for a decent hotel at very last minute. I only reserved the hotel because of its low price (70 EUR/night), possibility of late check-in (we arrived at 2300) and free parking.

Just like the other Hesehotel, check-in and check-out are done at the Hesburger restaurant downstairs (open till 2330 Sun-Thu and 0030 Fri-Sat). We had to wait in the line with other customers ordering food. Fortunately the queue was short.

The hotel is either brand new or newly renovated. Everything in the room was new and very clean. The bathroom and shower were also spotlessly clean. The beds were very comfortable. The room was quite. Although our room had window facing the street, we could hardly hear traffic noise. Other amenities included: tea kettle (no tea bags or coffee though), small fridge, hairdryer, working desk) (I dont remember if there was a safe).

The K-citymarket within 3-4 mins walking distance is open 24 hours. There is a cafe and bakery in the market. We had our morning coffee and breakfast there.

The hotel was a big surprise because of the price and overall condition of the room. I highly recommend this place. I will certainly consider staying here again when we visit Turku again.

This review is the subjective opinion of a Tripadvisor member and not of TripAdvisor LLC.
Andreea555
Ouranoupoli, Greece
8799
Reviewed 25 March 2019
Not the best option

The hotel is in walking distance from the train station but somehow badly located on google maps so it was difficult to find it at first. The surroundings do not offer a nice view and it is a 20-25 minutes walk to the city center.
We were confused by the fact that we could not find the entrance or the reception, but it was rather strange that the check in has to be done in the fast food restaurant at the counter. I did not like the fact that I had to wait in line among people ordering burgers and fried and as much as I would like junk food, just like others, I do not like get the smell of fries in my clothes.
The entrance towards the rooms was not the same with the restaurant, and there was no restaurant smell in the hotel. The room was small but very clean and so was the bathroom. Towels were clean as well. Wifi was bad and we could not connect.
What shocked us in the room were the beds: bunk beds! We did not expect that, but accepted it for one night. We did not even try to change the room.

This review is the subjective opinion of a Tripadvisor member and not of TripAdvisor LLC.
Jacqueline Anne A
1
Reviewed 2 September 2018
A three night stay on our tour of Baltic Capitals

We felt a bit daunted by the unusual arrangement for check in as which is in the Restaurant at the Counter. We had to join the queue of people buying burger meals, who were given priority, so we had to wait with our luggage till the people in the queue had been served. It is worth noting that there is no Staff cover when the Restaurant isn't open. We had to sign a form agreeing to pay a fee for someone to come out and let us in if, for any reason we were unable to gain access to the hotel after the Restaurant closed, and the staff were unavailable. The Hotel itself was clean and the room was a good size. The Towels were clean and a good size for showering. The beds were Bunk Beds but were quite comfortable and the Bed Linen was Clean. We were glad of the Air Con which worked well in the exceptional temperatures of this Summer. Breakfast was available at a fee of 6 Euros, for a breakfast burger. There is a Cafe nearby where breakfast can be purchased. There was free Wifi but the connection was so poor we couldn't use it. There was a TV which we would have used for news, but the connection was very poor, could not find the channels and it kept disconnecting. The Hotel itself is on the edge of town near the highways and long distance bus station and not far from some shops. We didn't mind the walk into town or to the railway station when we left for Helsinki. There is quite a walk to access public transport. The Hotel is reasonably priced and OK for short stays. Otherwise I would look for something a bit more central with better Wifi and TV reception and close to public transport, though it may cost a little more it would probably be worth it.

This review is the subjective opinion of a Tripadvisor member and not of TripAdvisor LLC.
lauravirnes
Malaga, Spain
9043
Reviewed 1 September 2018
For its cheap price it's good

One night to stop in turku this was a good, moderate option. The check-in was a bit clumsy... we had to queue with burger buyers before someone from the staff helped uso to actually check-in. There were no signs where to go and what to do. Once we got it going the service was very friendly and fast.
The upper bunk bed that opens from the wall is a bit scary because it doesn't have a proper rail.

This review is the subjective opinion of a Tripadvisor member and not of TripAdvisor LLC.
laendersammler
Nuremberg, Germany
263274
Reviewed 23 August 2018
Rating 3,5

I stayed at Hesehotelli for one night in March 2018. It was a 15 minutes walk from the railway station to get here. The long distance bus terminal is just outside the hotel.
To go to the city center for sightseeing and/or shopping it is also a 10-15 minutes walk. So the location is convinient.
The „reception“ ist he Heseburger-Restaurant, which is a bit strange to stay in line togetehr with people, who are ordering Hamburgers, while you are going to check-in at a hotel.
But check-in was smooth and quick. The room was plain and clean (and quiet) – similar to rooms at the Ibis-Budget-Chain.
As I was only looking for a place to sleep, Hesehotelli worked perfect for me.