Peace and harmony just minutes away... - Review of Hostel Suomenlinna

US$78
Reserve now, pay at stay
View deal
Booking.comUS$78
Hotels.comUS$78
PricelineUS$78
eDreamsUS$78
Orbitz.comUS$78
TravelocityUS$78
View all 12 deals
Prices are provided by our partners for one room, with variable occupancy rules as provided by the property, and reflect nightly room rates, including all taxes and fees known to our partners. Please see our partners for more details.
Payments made by partners impact the order of prices displayed. Room types may vary.
TinyKata
Tampere, Finland
2

Peace and harmony just minutes away from Helsinki centre

An amazing price/quality ratio! For just a third of the price of a city centre hotel room you'll get a unique and quiet room in a historical building. The hostel is spotlessly clean and the staff is nice. Breakfast is good (and stunningly inexpensive). Remember to reserve your breakfast already upon booking.More

Thank you so much :)

Report response as inappropriateThank you. We appreciate your input.
This response is the subjective opinion of the management representative and not of TripAdvisor LLC
See all 64 reviews
Payments made by partners impact the order of prices displayed. Room types may vary.
Nearby Hotels 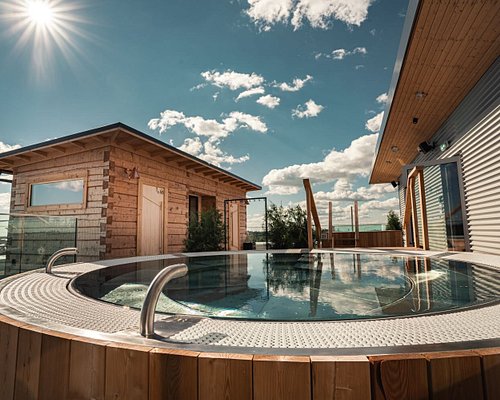 A small getaway from city life. Helsinki is a quiet city but sometimes one wants to get away from it all. I loved staying at this hostel. Dorm is a dorm but I kind of agreed with a friend that next we'll take a twin here, instead of taking a place in the city. Really nice staff, clean and practical.

Thank you for this rview :) We are glaad to hear you liked our get away. We truly have a unique Hostel. Welcome again!

Report response as inappropriateThank you. We appreciate your input.
This response is the subjective opinion of the management representative and not of TripAdvisor LLC
459marthag
Canberra, Australia
225
Reviewed 23 September 2017 via mobile
Pretty Good

Nothing fancy but it does the job. It's clean and the staff were friendly. Just be careful when booking, because (at least the time of year that I was there) there were no ferries to the mainland between 2am-6am. This was a problem for me because I had a flight out at 8am. That's not the hostel's fault though.
My only complaints for the hostel were:
• The lockers are not big enough for most luggage, especially with the shelf, so you can't lock up your luggage
• There's no bin in one of the female toilet cubicles. I know that there's one under the sink outside, but I think it's a necessity to have bins in female toilets
• The shower curtains float inwards while you're showering, which is uncomfortable

Thank you for your feed back!
We never actually thought about the bins in both down stairs female toilettes, and now that it`s mentioned we`ll deffinately fix that one :). Thanks! We have noticed the problem with the lockers. Some guests want the shelfs and some just a big enough locker for luggage. There are ones without the shelfs but offcourse it`s a problem if those are not available. We´ll think about it and perhaps take the shelfs off them all. The problem with the shower curtains is a bit harder to solve. In a longer term, perhaps we could invest on shower doors. Good point absolutely. Anyway, i´m glad to hear your stay was overall a good experience! Hope to have you again at our Hostel :)

Report response as inappropriateThank you. We appreciate your input.
This response is the subjective opinion of the management representative and not of TripAdvisor LLC
Nor_Stanzi
105
Reviewed 31 August 2017 via mobile
Really nice hostel

The hotel was very clean and quiet. Staying on Suomenlinna was a neat experience. It was a great decision to get up to explore the fortress before most tourists got there later in the morning. The hostel kitchen is quite small, but there is a small grocery store beside the hostel. The hostel is often unstaffed, but it's set up so you can check yourself in at anytime and pay in the morning when someone is at the desk. I would definitely recommend the hostel.

Thank you for your feed back!
I´m glad to hear you had a good experience with us :)
The kitchen is quite small and only ment for ligt cooking. At the moment we can`t really do much about it, even if we want to :( But we´ll try to keep it clean and well equipped.
Hope to see you again!

Report response as inappropriateThank you. We appreciate your input.
This response is the subjective opinion of the management representative and not of TripAdvisor LLC
sarahr752
Christchurch, New Zealand
7135
Reviewed 30 August 2017
Nice, quiet hostel

This hostel is nice and quiet and in a great location. The ferry to the island runs frequently enough to not be a problem. The beds were OK, except the bunks were too low that you couldnt sit up in the bottom bunk. The lockers were too small for our bags so we had to clog up the floor space with them. The lack of staff was strange. If you come after check in and leave early in the morning you will struggle to pay for your stay!! It's always nice when a hostel has staff available incase you have any questions or problems.
The showers were horrible! The shower curtains kept blowing in and sticking to me. My friend had the same problem. It made it very difficult to shower.

This review is the subjective opinion of a Tripadvisor member and not of TripAdvisor LLC.
Cloklo
Danube-Auen National Park, Austria
3429
Reviewed 19 August 2017
great island, staff not very helpful

Overall we were happy with our stay because the island is great and very quiet. This hostel is in an old school, an interesting place. Worth staying one night. But the beds and sheets were not very comfy, You're expected to make your bed and take sheets off after your stay. Fair enough I guess. But when we arrived the guy at the reception was either in a bad mood or clearly not interested in helping. Don't expect much advice if you have questions, there's rarely anyone at the front desk. I guess its good if you wish to stay for a while and be able to use a kitchen without having the feeling you're staying in a hotel. Just behind the hostel there's a slightly hidden restaurant called Bastion cafe that's much cheaper than other places for nice food. 15€ a dish

Thank you for your feed back. We are very sorry for your bad experience with our staff. A bad day should not be shown to our guests and it is our privlidge to help you with any matters. The beds are in som oppinions hard yet others tell us they loved them. As an experienced hostel traveller myself, I think they are comparably good quality. We are planning to buy new mattrasses next year in dorms anyway. In our private rooms we just bought new ones.