Beautiful hotel with a great breakfast ! - Review of Hotel Metsahirvas

US$140
US$132
View deal
FindHotelUS$133
eDreamsUS$140
TravelocityUS$132
View all 13 deals
Prices are provided by our partners, and reflect nightly room rates, including all taxes and fees known to our partners. Please see our partners for more details.
Payments made by partners impact the order of prices displayed. Room types may vary.
henriksuu90
2

Beautiful hotel with a great breakfast !

Room was perfectly clean and comfy. Easy to drive and arrive from the airport. Just 15-20min drive from the city centre (be careful with the speed limit cameras along the road when driving to the hotel) ! Breakfast was great with a variety of options! Bed was very comfy and warm to sleep. Very quiet and peaceful atmosphere in the hotel. Overall it was a great stay in this hotel !More

Hello Henrik! Thank you for your review. Great to hear you had a nice stay here with us. Yes indeed, better be careful with the speed cameras along the main road! But I guess on a holiday we are never in a hurry, are we? ;)

Report response as inappropriateThank you. We appreciate your input.
This response is the subjective opinion of the management representative and not of TripAdvisor LLC
See all 14 reviews
Payments made by partners impact the order of prices displayed. Room types may vary.
Nearby Hotels

Breakfast included
Sponsored
Santasport Resort
US$218
Booking.com
View deal
Hotels.com
US$293
Trip.com
US$176
Priceline
US$319
View all 13 deals from US$176
165 reviews
We compared the lowest prices from 13 websites 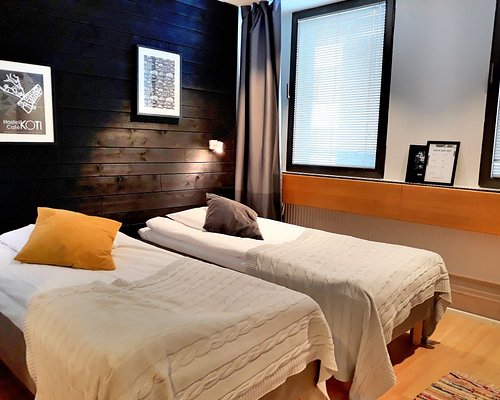 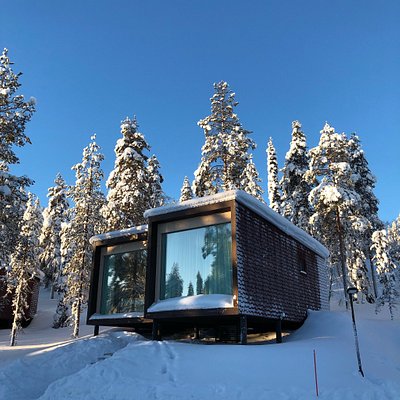 Expedia.com
View deal
Pay up to 12X
Booking.com
US$261
Priceline
US$261
Trip.com
US$424
View all 16 deals from US$261
200 reviews
We compared the lowest prices from 16 websites
Breakfast included
Santa Claus Holiday Village

Stayed here for three nights recently, and booked a double room. The room was lovely and the beds are super comfy! They have black out curtains which really helped especially as it didn't get super dark because of the snow. The only thing is the shower, they don't have a proper door on it, so the bathroom floor tends to get soaked, but they do provide a really effective squidy to dry the floor. Otherwise the room and bathroom was clean and really modern and lovely.

We actually got upgraded our room from a double to a suit with a little kitchenette and table etc, which ended up working out really well for us as we were on a budget and this allowed us to cook at the hotel. The hotel does also offer breakfast and dinner service. The breakfast service was really good with plenty of choices.

I would really recommend this hotel and there were no major faults, but I would also say its best to have a hire car to make getting around a lot easier (cabs are expensive, no joke) and we hired a car from the airport for 100 euros for three days.

This review is the subjective opinion of a Tripadvisor member and not of TripAdvisor LLC.
Amrod_x
Milan, Italy
28353
Reviewed 13 August 2019
On the river

The hotel is located at 15 minutes car from Rovaniemi, it was easy came here from the airport. The room was large and clean. The breakfast was good and with lots of choice. Very kind staff. After a few minutes walk from here you can see the river: great view!

This review is the subjective opinion of a Tripadvisor member and not of TripAdvisor LLC.
RiinaH63
London, United Kingdom
44
Reviewed 29 June 2019 via mobile
Great hotel

We stayed in Hotel Metsähirvas for one night. We had three different rooms and had two dogs with us. Staff was very welcoming, hotel is next to amazing lake and all the rooms were incredibly high standard and with very reasonable price. Breakfast was also great. Highly recommend this hotel!

This review is the subjective opinion of a Tripadvisor member and not of TripAdvisor LLC.
kumarpt
Chennai (Madras), India
1726
Reviewed 19 March 2019
Warm hospitality amidst the cold weather!

We were a group of 30 friends from India who visited this hotel in the second week of March, 2019. While the standard room we stayed in was rather small, it was neat and functional. The striking feature about this hotel is the extraordinary hospitality extended to us from all the staff particularly Janita and Markus. When we arrived at the hotel, we were pleasantly surprised to see the staff offer to carry our rather large suitcases up a flight or two of stairs (depending on the floor where the rooms were located) with a smile on their faces! When a few couples in our group expressed their inability to negotiate the stairs (there were no elevators in the hotel), they were given large suites on the ground floor at no extra cost! When I told Markus that my suitcase's zip had been damaged during our journey, he offered to get it fixed by his tailor the next day. While we were away at Santa Claus Village enjoying ourselves, Markus not only did what he had promised but Janita was kind enough to send me a message that my suitcase had been fixed and to enjoy my day without worry! That night, Markus took us to a spot near the hotel to try our luck with the northern lights and stayed with us till about midnight when we decided to retire having seen just a little glimpse of that elusive phenomenon! The next morning, we had an early check out and an early breakfast was served to us by the staff, again with their trademark smiles! Indeed, it was hospitality par excellence!!!

This review is the subjective opinion of a Tripadvisor member and not of TripAdvisor LLC.
memoukos
Pallini, Greece
3456
Reviewed 3 January 2019 via mobile
Great stay at a great building with history.

We stayed there from 28 dec to 02 Jan 2019. We were part of a group visiting Santa Claus village and Lapland. Rooms were fine, newly build and clean. Breakfast was basic, lunch we didn’t have there but dinner every night was amazing. It was home cooking at its best. We had moose cooked in various ways and always was so tasty that we could not stop refilling our plates. The chef was so caring to our needs and would always do his best to produce a great result. With success.

The hotel is run by a family and everyone is happy with their jobs. I would definitely recommend it.

Thank you for taking your time to review us here on TripAdvisor.

We are happy to hear you had an excellent stay with us. I will pass the feedback also to my colleagues in the restaurant. Our food is made from local ingredients and the special ingredient we have on our menu is a local wild moose. I am thrilled to hear that you liked the local flavors we served!

We will be more than happy to have you back with us again soon.

Report response as inappropriateThank you. We appreciate your input.
This response is the subjective opinion of the management representative and not of TripAdvisor LLC
View more reviews
PreviousNext
123