Stayed here two nights and was pleasantly surprised. The plan was to see the northern lights, but due to heavy clouds, it wasn't in the cards. The lodge made up for it. We had a cabin that slept about 7. There was a large window that overlooked a lake with mountains in the background. This place is pretty remote so we ate in the dining room each day. A full breakfast buffet came with the meal and it was plentiful and good. The lunch and dinner menu was not extensive, but everything we ordered was excellent. I would highly recommend Wilderness.

See all 11 reviews
Payments made by partners impact the order of prices displayed. Room types may vary.
Nearby Hotels 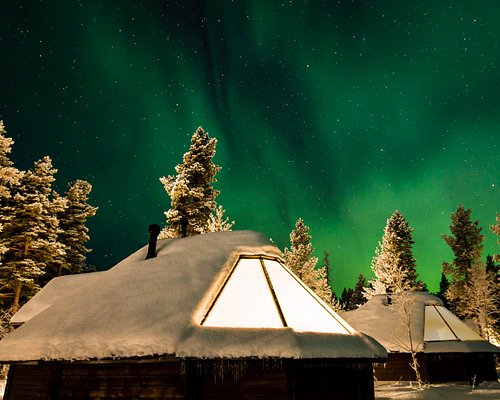 Hotels.com
View deal
Booking.com
US$72
eDreams
US$72
FindHotel
View all 7 deals from US$72
59 reviews
8.7 km from Wilderness Hotel Lapinleuku
We compared the lowest prices from 7 websites

Hotels.com
View deal
Pay up to 12X
eDreams
US$123
Agoda.com
US$162
Trip.com
View all 14 deals from US$123
755 reviews
41.5 km from Wilderness Hotel Lapinleuku
We compared the lowest prices from 14 websites
Top Rated
Breakfast included
Guesthouse Husky

What can i say! Their welcome and their hospitality made my stay even more beautiful! I will not be writing alot but Finland is a country to visit,A country filled with nature.

The wilderness hotel offers you cabins with glass windows so you can sleep under the stars or if you are lucky watch the aurora. This is a one of a kind experience that you all need to do!

This review is the subjective opinion of a TripAdvisor member and not of TripAdvisor LLC
Maarten B
Baarn, The Netherlands
2724
Reviewed 21 February 2016 via mobile
Adorable

This place is extraordinary. We were picked up by Timo from the bus station, because Lapinleuku is 22km from the city. So here is immediately my first advise. If you don't have a car, I suggest you look for some other place. It is beautiful, desolated, adorable (all is build by Timo and his hands), but it is far away from everything. Timo and his wife are very helpful, but old. They cook great like in other reactions is mentioned and they look after your well being. Most likely as Timo told us, this will most likely be there last year operating Lapinleuku. He showed pictures from newspapers all over the country where he was in with a famous actor, because the actor and his crew filmed there for several weeks. He is so proud of his place and he should. The rooms are very cosy, everything is made of wood. The place and Timo and his wife created a memory I will never forget, so if you would like this as well, go quickly as they probably won't be there for long. Enjoy the rest, food and friendliness. Thanks for the memory!!!

Trip type: Travelled as a couple
Ask Maarten B about Wilderness Hotel Lapinleuku
3  Thank Maarten B