US$72
View deal
FindHotel
Agoda.com
Hotels.com
View all 8 deals
Prices are provided by our partners, and reflect nightly room rates, including all taxes and fees known to our partners. Please see our partners for more details.
Payments made by partners impact the order of prices displayed. Room types may vary.
Ajelinu
2

Me and a friend went to stay here on our last night in Ivalo and I was simply blown away by the area and staff.
The location in the forest near the lake was absolutely stunning and I was lucky enough both to meet a reindeer on the middle of a frozen lake and see the northern lights without any light pollution.
It’s a gem.

Trip type: Travelled with friends
See all 59 reviews
Payments made by partners impact the order of prices displayed. Room types may vary.
Nearby Hotels 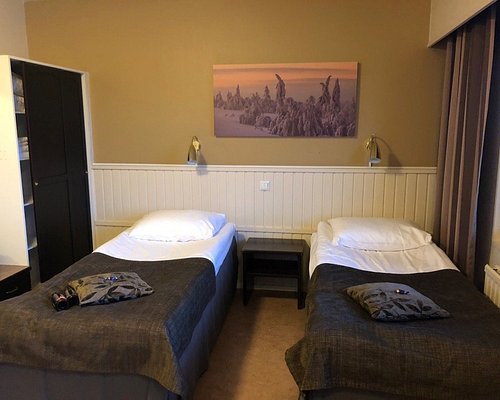 eDreams
View deal
Expedia.com
US$117
Trip.com
US$113
Booking.com
US$117
View all 14 deals from US$113
199 reviews
8.9 km from Ukonjarvi Holiday Village
We compared the lowest prices from 14 websites

Breakfast included
Star Arctic Hotel
US$168
US$143
Tripadvisor
View deal
Pay up to 12X
Travelocity
eDreams
Trip.com
US$168
View all 12 deals from US$143
149 reviews
33.9 km from Ukonjarvi Holiday Village
We compared the lowest prices from 12 websites 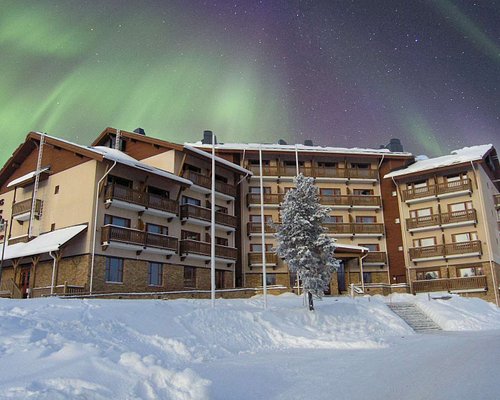 Away from light pollution an ideal place to watch the Northern Lights. All the cottages are a short stroll to Lake Inari which was frozen (3rd week of March). We waited, watched and saw some activity. I wish there were some more chairs there. 2 chairs were planted there all day.

We took a walk around the property during the day and discovered another frozen lake, pretty and peaceful.

We stayed at cottage D3 for 4 nights with the Aurora Service Tours. D3 is a 2 bedroom cottage (total 4 single beds that could use an upgrade). Although the bedrooms are quite small, the living room, dining area and kitchenette make up a larger space. The bathroom is clean. I'm sure the shower curtain could be replaced by a glass partition someday. Our Sauna worked only one day. We should have asked the owners to fix it but just got lazy.

We didn't use the restaurant as we did our own cooking.

I would recommend this place purely for viewing a sky full of stars and Northern Lights from the Lake (provided of course there are clear skies).

This review is the subjective opinion of a TripAdvisor member and not of TripAdvisor LLC
Sian S
187
Reviewed 10 March 2017 via mobile
Awful, awful, awful

Awful experience. Even though it says on the website that there is THERE IS NO RESTRAUNT. We arranged to be picked up at the airport at 1300hrs only to receive an email in the morning saying they were unable to pick us up unless they had a flight number. We rang the Village when we were at the airport and were told that we had to get a bus to Ivalo and that we would be picked up from there, we explained we had large bags and that airport transfers are advertised on the website. We were told we would be picked up at 1400hrs. At 1430hrs we finally got picked up and we were told there was no restraunt and we would go to the supermarket. When we ardived at the supermarket we were told 25mins then the woman drove off. Dashing round frantically managed to guess what we needed and kind of understand what was what as neither myself or my partner speak Finnish. 40mins later she turns up outside the supermarket, only to drive across the road and her to say 'We wait here, I need to meet someone'. After 20mins of waiting a man pulled up and we were told he was going to take us to the Village.He got in the car did not say a word and dropped us off outside the room and unlocked the door, we unloaded our bags then he drove off leaving us without a key. After we checked in after an hour or 2 we avoided going back in the reception until we were leaving. Our flight was leaving at 1430hrs and we asked to get to the airport for 1200hrs as there is no online check-in. We went to the reception for 1115hrs and we were told we had to wait, yet again. We explained we wanted to be there earlier due to the above reason and the answer we had shouted at us was 'I give you transfer service we go when I say not when you say, I get you there on time not before not after when I say so'. So eventually at 1215hrs we were taken to airport. Not a good way to end our holiday and will DEFINITELY NOT be going back, it is a shame as the location is amazing and a very good place to see the Northern Lights we were lucky enough to see them both nights.

This review is the subjective opinion of a TripAdvisor member and not of TripAdvisor LLC
Tero K
2515
Reviewed 4 June 2016 via mobile
Dont pay, use tent. It is same but free

Cabins are not worth of 55 eur, you can see out around door and if wind outside those are freesing cold, very small, not clean. Bed is so small that if you are 190cm you dont fit. Covers so thin and beds are also very hard.

Shared shower place you find next to Reception, 100m walk away. Shared Toilet is another direction and without heating or light.

It is possible to improve cabins to be very gozy and good guite easily. This condition those are compare with tent. Can use, but need expext that.
They are not honest in booking. Booking there read that ALL cabins have toilet and shover.

Big thanks that we got our money back when cancel order, reception staff was nice anyway. And they have handsome dog

This review is the subjective opinion of a TripAdvisor member and not of TripAdvisor LLC
Glacierfed
Hong Kong, China
3645
Reviewed 4 April 2016
Awesome place to see the northern lights

Don't waste money on glass igloos, you can get a good view here (although you do have to stand out in the cold). The cabin is just a short walk from the lake, which provides a wide open view for seeing the aurora. We stayed for 2 nights and luckily we were able to see a somewhat strong display on one night. Inside the cabin there is a sauna and a functioning kitchen with utensils. Riita, the owner, picked us up from the airport and took us to the supermarket so we could buy groceries and prepare our own meals.
Riita isn't the warmest nor most talkative person, and initially we thought she was kind of unwelcoming. But she opens up if you start to chat with her, and she would do anything within reason. She's alright.
We visited a husky farm via her referral, Anne. It was only 2 hours but we had a great time riding the dog sled and seeing various arctic animals on the farm.

This review is the subjective opinion of a TripAdvisor member and not of TripAdvisor LLC
Inga_K_K
Quito, Ecuador
7941
Reviewed 21 December 2015
Northern Lights and Silence

I had a very pleasant stay at the hotel. Location is great - right next to lake (actually very close to several lakes), silence in the woods is amazing. Reindeer hanging around - most of them run away from humans, but one has learned to come to get some food. You need to have your own groceries and toiletries (closest shop in Ivalo), room is simple, but comfy enough - soft bed, hot shower (but same room as toilet resulting in wet floor after use). Anne will arrange for all kinds of activities, such as huskie safaris etc.