Went for my birthday week - Review of Lalandia Billund

Orbitz.com
CheapTickets
Booking.com
View all 11 deals
Prices are provided by our partners, and reflect nightly room rates, including all taxes and fees known to our partners. Please see our partners for more details.
Payments made by partners impact the order of prices displayed. Room types may vary.
75duncani
64

Went for my birthday week

Overall the resort would get 5 stars it was clean friendly and easy to use even though we only speak English. My only complaint would be some of the food was not very nice and quite overpriced also some of the drinks are expensive but we found this was the whole of denmark not just lalandia. I also fell there was a little understaffed but this may have been due to social distancing, also I few of the restaurant where we wanted to eat were closedMore

Thank you for your words. They good ones we enjoy, and the rest we will use in our evaluations and further work.

We hope to see you again

Report response as inappropriateThank you. We appreciate your input.
This response is the subjective opinion of the management representative and not of TripAdvisor LLC
See all 760 reviews
Payments made by partners impact the order of prices displayed. Room types may vary.
Nearby Hotels 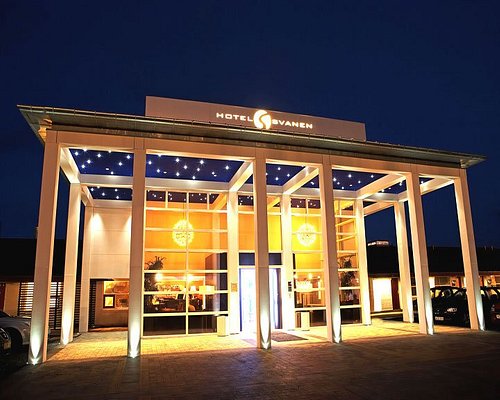 Expedia.com
View deal
Pay up to 12X
Hotels.com
US$138
getaroom.com
US$105
ZenHotels.com
US$146
View all 16 deals from US$105
747 reviews
1.5 km from Lalandia Billund
We compared the lowest prices from 16 websites
Danhostel Grindsted-Billund

Lalandia is a really fun place for the kids, but be prepared to spend a lot of money. Nothing is for free even if you pay a lot to stay in their apartments. Even electricity and water cost extra. The place is also crowded and dirty.

Aquadome and Monkey Tonky land are great (but also dirty). The rest is quite crappy.

If there is a next time in Billund we will find somewhere else.

Report response as inappropriateThank you. We appreciate your input.
This response is the subjective opinion of the management representative and not of TripAdvisor LLC
missemilybates
Manchester, United Kingdom
4
Reviewed 12 May 2020
Won't give refunds

We were due to go to Lalandia for my partner's 50th birthday during May half term and had saved for some time for this treat. Due to the border to Denmark being closed Lalandia have cancelled our holiday. However, they are refusing to give me a refund and are instead offering a voucher - at a time when my partner can't work and my job is at risk of redundancy. I have told them that I will not be able to afford to travel at another time but they don't care so I am just expected to lose MY money.
From all other reviews I can see that this is a highly profitable company that charges very high prices during normal times - but they are not willing to show any compassion when they have had to cancel holidays.

We have already been in contact with you, and given you possibilities that is possible.

Of course we are sad to hear about your situation, but all guests are given the same possibilities.

We wish you all the best in the future, and of course we still hope to see, when we again can open up.

Report response as inappropriateThank you. We appreciate your input.
This response is the subjective opinion of the management representative and not of TripAdvisor LLC
Realtravelasia
Asia
9339
Reviewed 2 March 2020
Kids will love it, your wallet probably not so much,

it’s a bit like being in an airport when it comes to their prices of food and drinks, completely out of touch with the world outside.
That being said, the accommodation is reasonable, the center itself is quite alright, but when you charge 20 dkkr for a small bottle of water and 75 dkkr for a beer, you’ve lost any sense of reality.... now when you add a piece of (very average) pizza ( yes ladies and gents, a slice) for 60 dkkr, you surely believe you’re In an airport!! The kids had burgers at the aqua dome and they cost 45 dkkr, was very similar to the basic burgers you get in Burger King or McDonald’s (they actually looked exactly the same) and usually cost around 10 dkkr. I can’t remember the price of the fries, but surely they were way overpriced......
The price we paid for our stay included entrance to the aqua park and the (fairly small) play area, but there’s several other activities which is not included.
The fact that a lot of the accommodations is a mile or so away, and the train that runs between the cabins and the aqua park takes the day off between around noon and 17:30, is of no consequence provided that Lalandia can make a buck or two, But if you plan to bring your own car, to go to the aqua dome, which is in the same building as everything else, they are slightly cheaper than airport parking prices though.
Now, here’s the thing, you can drive another few hours to get to weissenhauser strand (and a few others), which is the same concept and of similar standard , but are cheaper on accommodations (albeit with slightly lower standards on some) don’t charge for parking, don’t try to charge food and drinks double the price of what you would pay in a city and don’t have any housing which is a mile or two away. Sure Weissenhauser have its flaws as well, but the Germans won’t stand for being overcharged just because they’re in a holiday Centre.
We opted to have several dinners in Vejle (25 min drive) which provided us with a lot better value and choice than we could get in Lalandia. There’s also one or two decent pizza places in Billund itself (a mile away) which provides decent value for money.
All in all, the kids had a great time, but next time we’re heading across the border, to get better overall value.

Thank you for your words.

We are sad that it was not possible for us to live up to your expectations.

We would like to give our guests good experiences when they visit us, and we are sorry if we did not succeed in your case

Report response as inappropriateThank you. We appreciate your input.
This response is the subjective opinion of the management representative and not of TripAdvisor LLC
MonikaB1222
62
Reviewed 2 January 2020 via mobile
Family holiday

Absolutely wonderful for families and kids. Beautiful and cosy accommodation, for sure take the day pass with not only aquapark entry but also Legoland. Weather was not great, but with all the activities and travelling a bit around definitely we had great vacation with our 9 years old son, me and my husband.

Dear Monika
We are so happy to hear that you had a great vacation.

Report response as inappropriateThank you. We appreciate your input.
This response is the subjective opinion of the management representative and not of TripAdvisor LLC
Cosmopolitan756260
1
Reviewed 2 November 2019
Overpriced - poor value- public taken as cash cows

Visited the pool and children’s play area, as most mention is way overpriced, you will get mugged for very average food

Noodles - chips - salad- water- two cokes an expresso and latte 350 be warned. Quite funny when you consider the flight return cost less that that:)

Don’t see so many children leave to go to toilets - leave you with that thought after one pool was closed due to poop.

Children’s adventure play area 60 each so two adults pay to go in the with children 180 total for one child to play - to find once inside there is literally no tables and chairs for you sit at - no security for coats and shoes,

Pool was ok there are better in Europe- overpriced but ok for a day out,

We always want to give our guest gode experiences whenthey visit us, there fore vi are sad to read your words, about the prices and the experiences in our AQ