US$245
US$168
View deal
Hotels.comUS$245
PricelineUS$220
eDreamsUS$220
View all 16 deals
Prices are provided by our partners, and reflect nightly room rates, including all taxes and fees known to our partners. Please see our partners for more details.
Payments made by partners impact the order of prices displayed. Room types may vary.
IloCo
Perth, Australia
7759

We stayed in February 2020 in one of the offsite apartments (we needed two bedrooms). The hotel location and restaurant are great. Very friendly and helpful team. Would recommend staying in the main hotel if you can. Would definitely stay there again.

Trip type: Travelled with family
See all 226 reviews
Payments made by partners impact the order of prices displayed. Room types may vary.
Nearby Hotels 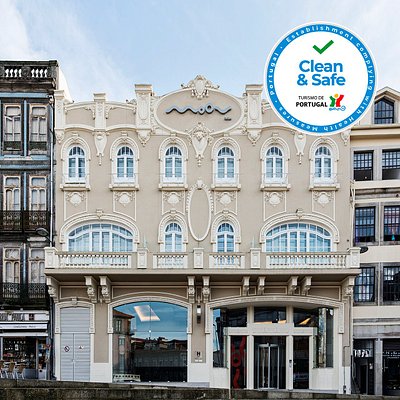 Taking safety measures
We compared the lowest prices from 19 websites
Torel Avantgarde
US$300
Booking.com
View deal
Orbitz.com
Trip.com
US$270
Expedia.com
US$285
View all 18 deals from US$270
900 reviews
0.9 km from Torel 1884 Suites & Apartments

Taking safety measures
We compared the lowest prices from 19 websites
Hotel Mercure Porto Centro Aliados
US$159
Booking.com
View deal
Expedia.com
US$159
Agoda.com
US$139
Hotels.com
US$159
View all 14 deals from US$139
47 reviews
0.5 km from Torel 1884 Suites & Apartments

Torel 1884 may be a nice place BUT what I find unacceptable for this kind of hotel is that they first confirm the booking (directly with Torel 1884) of 2 suites and the day after they USE Covid as an excuse to say there is no place anymore....BUT they propose us an upgrade in Torel Avantgarde with pool, Douro-look, free parking...it LOOKS attractive...BUT a month ago they did the same "covid"-proposition to a French lady (see her comment) and she was absolutely NOT pleased with her stay! A mediocre hotel even with an upgrade is still mediocre! EVEN WORSE , 2 days after we tried to do the same booking direct at 1884 as before for the same 2 suites at same dates and it was perfectly possible! No Covid in two days...do the have vaccine YET? SO they permit overbooking over and over again and then send you to a not so nice hotel with an upgrade...but with NO SATISFACTION at the end. UNACCEPTABLE and DISHONEST....and I have travelled a lot, see all my comments. Very pity. Now we made reservations at Le Monumental Palace, Maison Albar Hotels and then we go to SIX Senses Douro Valley. Torel 1884 has LOST a good client permitting overbooking and being dishonest.

This review is the subjective opinion of a Tripadvisor member and not of TripAdvisor LLC.
erivand
Porto, Portugal
6874
Reviewed 10 September 2020 via mobile
Awesome Place, Great Staff

The hotel is very modern and well decorated, but still preserves the classic style from which the name comes, the original stairs, the safe in the restaurant, the size and comfort of the rooms, breakfast, cleanliness and location are just perfect! The staff team are incredibly friendly and professional. I highly recommend staying in it! I’ll see you soon again.

This review is the subjective opinion of a Tripadvisor member and not of TripAdvisor LLC.
CovidBride
513
Reviewed 27 August 2020
Hotel cancelled on us, but now is refusing a refund

I booked 3 rooms in this hotel for a pre-wedding pamper weekend - booked for the end of March 2020.

When the UK went into lockdown and all the bridesmaids were stuck in their countries (USA, Netherlands, Portugal and UK). I contacted the hotel to see what could be done. They were a little unhelpful and somewhat rude, but eventually, they agreed to move the booking to a later date (and being nice, I didn;t want the hotel to suffer because I knew the travel industry was worried about covid-19).
As they stay would now be after the wedding (though the wedding was also cancelled a few days later, so that was another blow), I converted the booking to a long weekend, and for one room instead of 3. We paid the extra money on top of the original price (which included a more expensive fee as the new booking would be 'peak season'). The new booking was for September 2020. We also moved/ rebooked flights (though we lost money on one airline), transport to/from the airport, dog sitters, time off work, etc. for the new dates.

At the beginning of August, the hotel emailed to say they were still closed and they would have to cancel or move our booking again (to a different hotel). We asked for a refund at this stage as 1. Portugal still wasn't on the safe travel list 2. we'd now paid out over €1500 to a hotel that we'd had to change twice 3. the whole thing was originally intended for an event that was now null and void 4. We also would be unable to get any more time off work (certainly for the next year) and 5. There was so much uncertainty. We cancelled flights and all the other stuff.
Earlier this week - just two weeks before the cancelled booking, the hotel contacted us to say that they were now open again (even though <they> cancelled our booking). They said that because they were now open, they would not issue a refund. We are now starting legal proceedings against them.

I would not advise booking at the moment tbh, as the hotel may close again and you will be left out of pocket. I understand that travellers should be flexible, and we were - twice - but when the hotel themselves are the ones to cancel, a refund should be issued.

This review is the subjective opinion of a Tripadvisor member and not of TripAdvisor LLC.
JessOnHolidayAgain
22
Reviewed 12 June 2020 via mobile
Highly recommended

We stayed a long weekend and couldn’t have hoped for a better place to stay. The hotel is beautiful, very private and offers excellent service. We enjoyed brunch in the great little restaurant/bar downstairs and drinks in the upstairs library. One of the most beautiful hotels I’d be stayed in.

This review is the subjective opinion of a Tripadvisor member and not of TripAdvisor LLC.
SophieMelanie
Essex, United Kingdom
78
Reviewed 17 May 2020 via mobile
5* Boutique Hotel

First of all, if your thinking of visiting Porto you MUST stay here.

Should have written this review months ago but only just getting around to it...

Myself and my partner have stayed in beautiful hotels all over the world, we both agree this is our favourite!

From the moment you walk in the decor flows through the hotel with so much thought put into every detail, it really is just beautiful and so elegant but in an interesting way with exotic palms, gold finishes & incredible architecture throughout.

Not to mention the team, they are hands down the best hotel team we have ever met. From start to finish they took care of us, giving knowledge on the city, booking us dinner each night at different restaurants and booking tours.

The manager Goncarlo I believe his name was, from start to finish made sure our experience was perfect, checking how breakfast was each morning (incredible by the way, high quality food made fresh to order each morning) even down to using Nespresso coffee, we didn’t want breakfast to end...

The rest of the team where also amazing, Mariana I think was the Ass Manager / Front of house was also brilliant. The rest of the team, unfortunately I don’t remember all the names where just fantastic and should all be rewarded for all the hard work & the experience they create.

The hotel is in perfect location and not too far from the airport.

In short, you must stay here, it’s an experience in its self regardless of visiting Porto

Thank you Torel - we will be back,