Me and my friend had a great stay in this hotel well located in Olbia City Center.

From our arriving to our departure all staff members have been highly kind, accomodating and helpful towards any of our requests!

We met Barbara and Mikaela, 2 wonderful women part of their team who’s been very attentive and nice to us.

The breakfast is well provided with a variety of choices. The hotel is attached to a Michelin2020 rated restaurant where you can order food from, unfortunately without eating indoors considering the pandemic.

I highly recommend a stay there if you’re seeking for a peaceful hotel downtown Olbia.

To Barbara & Mikaela with love,
From Jerome & Tene.

Trip type: Travelled with friends
See all 286 reviews
Payments made by partners impact the order of prices displayed. Room types may vary.
Nearby Hotels 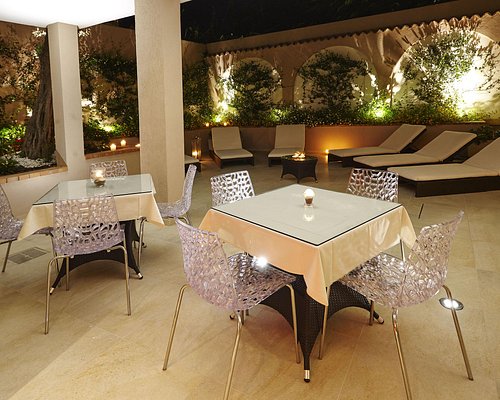 Despite cancelling my May reservation in March due to COVID, they have repeatedly refused to return my deposit. I have tried numerous times and they will not issue the refund. They are a dishonest company and I definitely would not recommend this hotel.

This review is the subjective opinion of a TripAdvisor member and not of TripAdvisor LLC
kelsbelles
Colne, United Kingdom
11493
Reviewed 14 October 2019
From hero to zero

1st room 201 air conditioning not working day 2 we agreed to pay to upgrade €560 to upgrade for 6 days, offering to pay the difference 3 times each time being told 'no do it at check out' we put the €560 separate in safe in a clip so we didn't touch it. On day before checkout they had asked us to move again as our room was already booked. we moved again placing everything in safe again ,each room we used same code for safe but alas on checkout safe wouldn't work so director had to come with master key, we were told we must have forgotten code. Then we discovered €300 was missing from the safe. They said this was not possible We were accused of spending it on dinner and forgetting! I asked police to be called but when they came we were completely ignored and instead the hotel filed report that we refused to pay the full amount. this was all done in Italian which I have a very limited ability in.All I required was a report from police for insurance then I could have claimed back the stolen money but we were then told if we wanted to report theft we would have to go to police station ourselves which we had no time to do by this point we just had to go to airport. Very upsetting end and disappointing to be treated like criminals when we were the victims.

We have not asked Trip Advisor to cancel this review because it must be clear to everyone that false reviews and obvious lies are easily recognized by users. After leaving the Hotel without paying the amount due, these people have the nerve to write a review using the word "Victims". The key to the safes of the Suites are in the possession only of the Director and Owner of the Hotel and from the entry records of the keys in the rooms no one has entered except the maid for cleaning, with us for almost 10 years and trusted person but who anyway could not access the safe. These people have never asked to pay the supplement in advance: after the problem with the air conditioning system, we made our proposal to move to the Suite at a supplement and it was accepted but at the time of paying the bill a non-existent theft by blaming employees who were absent at the time but whose movements were later verified. People like that should be ashamed instead of writing reviews.

Report response as inappropriateThank you. We appreciate your input.
This response is the subjective opinion of the management representative and not of TripAdvisor LLC
PendlePictures
Colne, United Kingdom
160206
Reviewed 14 October 2019 via mobile
When is a Safe not a Safe? Or do Miracles really happen?

My wife and I stayed here from the 5th to the 12th of October. When we arrived we had a small room on the 1st floor, we used the safe to store our valuables, we asked to moved due to the fact the aircon was broken. We upgraded to the 2nd floor suite 301, where we also used the safe, on our last night we had to move to room 303 suite, as 301 had been booked. We moved to 303 at approximately 8.45, were we once again put our valuables in the Safe, we enjoyed our last day out and about in Sardina. The morning arrived and we sadly had to pack up, but when we tried to open the Safe, it would not unlock, we both tried it, no joy, my wife rang reception, and someone arrived with a master key, problem solved! We then went to count the money to pay the hotel for our 6 nights upgrade €560, which we put to one side from day 2, on counting it all there was left was €260, €300 missing out of a locked Safe? A Miracle you might think! This money was counted everyday before, and the only time over the past 6 days that our safe didn't open, and Money was Missing? As you can imagine we were not happy and reported this straight away to the hotel, only to be told be the hotel director that we were mistaken, we had put the wrong code in, we had spent it by mistake, he told us that there was only 1 key, and only 1person that could open it, he said this could never happen! I told them that we were not paying and that the police must be called, that happened, and the police arrived, but not for us to report the crime of theft, but for non payment of our accommodation. Not one of the policemen spoke any English or even spoken to us, we weren't asked about the crime against us, it was all one sided, which we felt sickened and sad at the injustice. Due to everything that has gone on in Sardina, and this Hotel, we have decided that we are never to travel abroad again, as we don't want to be victims of theft again! Please note that there will be a response to this from the hotel, but this will be to keep face, as no hotel want to be known for stealing from tourists.

we chose Locanda del Conte Mameli because of the wonderful reviews here on Trip Advisor. I agree that it is a nice place, but we had some issues. We booked a Junior Suite, and placed a deposit of one night for a 3-night stay. After checking in and sending our luggage to the room, we were informed that the second floor does not have air conditioning due to a problem with the compressor, and that our room is on the second floor. We rejected the room, it was too hot. So we were given a downgraded room on the first floor next to the lobby. All was fine until we went to check out the night before leaving. We were charged 4 nights on a 3 night stay, plus we were being charged for the junior suite when we stayed in a regular double. The clerk amended the bill to reflect 3 nights, but said we had to pay for the junior suite anyway. He said that because he comped us a massage, we were even. So there was an argument, and the clerk told us that if we didn't like the hotel, we should have stayed elsewhere. We explained to him that we were 7000 miles from home, and that is not that easy. So we went to bed aggravated. In the morning the manager Angelo came in, and he was professional, and he straightened it out. In the end we were treated fairly. Would we ever go back? No, but my rating of this hotel is good. We loved the location, and the restaurant is expensive but great and the building has character. Parking is an issue. I noticed the listing here has been amended to say "street parking' rather than free parking. Yes there is street parking IF you can get a spot which is a big if. Otherwise the lots are expensive.

After a long journey we arrived in a little cobbled street to find this charming hotel. Greeted by helpful staff who accommodated our Italian, and allowed us to have a go. Lovely room ( bed a little hard), super breakfast! Thank you