Could be five star - Review of Park Hotel Pacchiosi

Could be five star

A really beautiful hotel in terms of architecture and decor almost in the wrong position though. problems at check in despite hotel being practically empty meant us being given the wrong room twice, third time lucky we got a room with a bath as ordered! Staff friendly but could do with an experienced Maitre d'hotel to train them up to the standard expected of a hotel of this calibre. The food we had was well cooked and presented, especially nice Parmesan and balsamic vinegar. Drinks were overpriced, service was slow and no ambience, hotel was empty so that can't be helped. We enjoyed our stay in this lovely hotel despite the few smell
problems and should mention that
management did send complimentary bubbly, fruit and chocolates as way of apology which was very thoughtful.

Show less
Trip type: Travelled as a couple
See all 456 reviews
Payments made by partners impact the order of prices displayed. Room types may vary.
Nearby Hotels 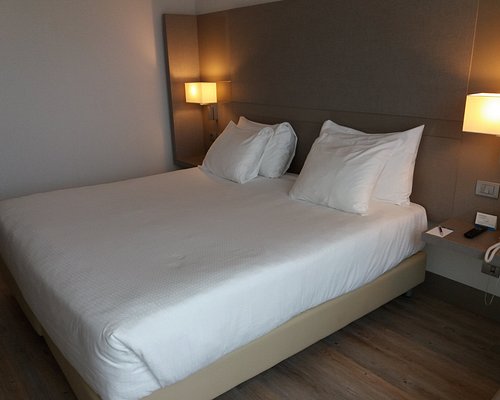 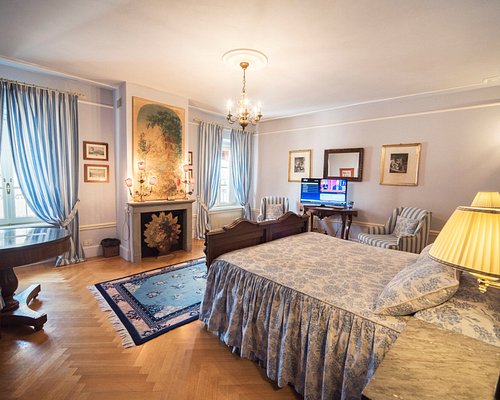 Travelocity
View deal
Booking.com
Official Website
US$97
Priceline
US$104
View all 17 deals from US$97
699 reviews
2.9 km from Park Hotel Pacchiosi

I was booked at this hotel for a work trip and when I arrived I was pleasantly surprised by how nice the hotel was. It's in a good location for getting around the city, not the best, but decent. I had a very comfortable stay in what was an otherwise odd room. My room had a sitting room which was large and lovely, but I found it odd that it was 4 chairs and not a sofa. Then my bathroom was down a spiral staircase which allowed for a very large bathroom, but it was weird that there was an emergency exit in it that I could hear people working through. But in the event of an emergency that exit is needed so I get it. Took me a minute to get used to, but it was great. Had heated floors, a large shower and a separate tub. Breakfast was included.

This review is the subjective opinion of a Tripadvisor member and not of TripAdvisor LLC.
ArubaAlan
New Jersey
14885
Reviewed 23 October 2019
Excellent upscale hotel

This hotel is a great upscale hotel in an area slightly away from the center of town and main attractions. But definitely within walking distance.
We had an excellent room with a bathroom as big as the bedroom down a spiral staircase from the bedroom. The hotel common areas are all marble and immaculate. The restaurant is excellent with many delicious and varied offerings. The evening hostess/server, Anastasia, is delightful, professional, knowledgeable about the offerings and multilingual, English, Italian and Russian.
Service throughout the hotel was top notch.
There is also an outdoor garden area for drinks or dinner.
Breakfast is included in the rate.

This review is the subjective opinion of a Tripadvisor member and not of TripAdvisor LLC.
mwwindsor
Windsor, United Kingdom
5151
Reviewed 7 September 2019
Soulless hotel needing improvements in service

The hotel is clean and well appointed but that it about as far as it goes. The first impression is not good - entering into a large bunker style garage and then trying to find your way to reception which is in another building without clear signage. It feels more like entering a high security government building than a hotel. The best description I can use is that this hotel has no sole or atmosphere and the reception experience was mainly one of indifference.

The hotel is not in a very nice neighbourhood and while it was ok to walk through there in the day time, I certainly would not have been comfortable walking there at night which meant that the only option was to eat at the hotel as there are no restaurants close by. When we asked about making a dinner reservation, this did not seem to be well received, even though the hotel was clearly not full. We were encouraged to go to other restaurants in the area which we declined and we were eventually told we could eat at the hotel having checked with the kitchen.

There is a lovely garden with outside seating but the doors from the restaurant to this area are strangely locked ! so no option of having an aperitif in the garden before dinner. We were the first guests to arrive for dinner and it was evident that our waitress was not happy about having to serve us, telling us she had 7 tables to wait on that evening . The food was mediocre but quite unacceptable to get over cooked pasta in Italy. When the food arrived I asked for freshly ground black pepper and then received a lecture about not adding salt or pepper before I have tasted the dish, quite frankly as I was paying for it, I think that was my prerogative. I will say that the aged Parmesan and the balsamic vinegar of Modena was very good.

At breakfast the following morning there were similar service issues, there were now two waitresses as opposed to one the prior evening but both lacked in training and seemed to spend more time "skitting" and chatting to each other than anything related to looking after guests. As the breakfast was a buffet, there was nothing for them to do other then serve tea and coffee and when I asked to have my teabag put into the cup before the boiling water, they giggled again and seemed to think it an unreasonable request . The breakfast itself was passable given the price but the selection of fruit was poor and the hot food was sitting on the buffet for some time.

The one positive experience was that I asked for a hairdryer (as the one that was installed in the room was totally impractical for anyone with longer hair ( the hose on a tumble dryer variety) and I was given a very good hairdryer from behind reception - clearly this is not an uncommon request.

The hotel has potential but until they can inject some sole into the premises and give the staff some much needed training I am afraid we would not return.

This review is the subjective opinion of a Tripadvisor member and not of TripAdvisor LLC.
Toni-A-Ego
Canton of Basel, Switzerland
5233
Reviewed 16 July 2019
Very poor experience - no doors to separate the bathroom

We arrived in an almost empty hotel and were met by an unmotivated and bored staff. Seeing our room, we were shocked that the bathroom had no door!! It's probably ok for a single room, but totally unacceptable with double occupancy. Our request to change the room was denied, albeit the hotel was almost empty. The "manager" didn't show up to face our complaints; she was extremely busy in hiding from us!
The location is quite far away from the city center - a walk throuogh an unpleasant neighbourhood.

This review is the subjective opinion of a Tripadvisor member and not of TripAdvisor LLC.
808howardc
Osaka, Japan
92
Reviewed 19 June 2019 via mobile
Parma visit

Easily one of the best hotels I have stayed in Italy. Very grandiose, attentive staff, excellent rooms with proper big shower! And a good quality breakfast. The centre is only a short 10 minute walk. definitely stay here again and again.