Ibis Deauville Centre
2 people are viewing this hotel
Lock in the lowest price from these sites
US$108
US$96
Free cancellation until 16/06/21
View deal
Hotels.comUS$96
Expedia.comUS$96
eDreamsUS$96
CheapTicketsUS$96
Orbitz.comUS$96
Lol.travelUS$108
View all 15 deals
Prices are provided by our partners, and reflect nightly room rates, including all taxes and fees known to our partners. Please see our partners for more details.
Payments made by partners impact the order of prices displayed. Room types may vary.
Lee C
7386

My wife and I were here on a tour, coming from Giverney, Roeuen and Honfleur.
We had stayed at an Ibis Paris Tour Eiffel and was pleasantly surprised that this hotel was a little bit different - starting with the room which was a bit bigger as well as washroom. The lobby also seems more like a typical hotel lobby.
The tour had dinner at the hotel. Buffet salad, which was good. Entree was Roast Turkey w/ mushrooms, and 2 Au Gratin, which was good. The Roast Turkey itself ... I would have needed a chisel or a power saw to cut it open. After 3 tries with the knife, I decided I didn't want to eat any of it anyway! Dried up and tough! Others also complained about the turkey being either dry and/or tough. Absolutely the worst turkey dinner I've ever had at a hotel.More

Show less
See all 1,521 reviews
Payments made by partners impact the order of prices displayed. Room types may vary.
Nearby Hotels 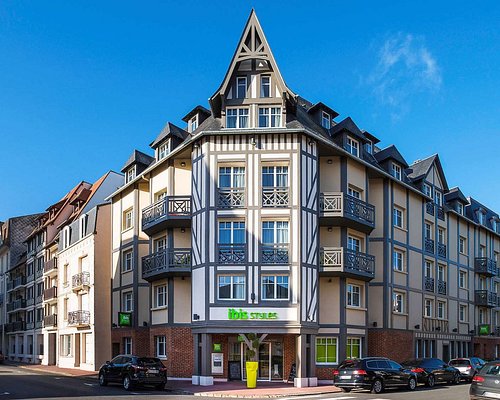 Taking safety measures
We compared the lowest prices from 17 websites
La Closerie Deauville
US$157
Booking.com
View deal
Free cancellation
Expedia.com
US$154
Hotels.com
US$146
Trip.com
US$206
View all 15 deals from US$146
1,280 reviews
0.6 km from Ibis Deauville Centre

We stayed at here from Aug 18-22 and enjoyed our stay at this hotel. The front desk was always helpful with our requests and questions we had about the area. We stayed in a loft room that fit our family of 4. The kids stayed at the bottom floor in the two sofa beds. We stayed upstairs in the king bed. Both areas have their own TV so the kids were pleased. Our suite had a nice view of the harbour. The hotel is only 10 min walk to Deauville Beach. Short walk to visit Trouville-sur-Mer across the water. We also drove out to Étretat - only an hour away from Deauville.
The room is clean overall. It would have been nice to have a bathtub (shower only) for the kids, but it was totally fine. We loved our beach stay (a break from our stay in Paris) and if we came back to Deauville we would stay here again!

This review is the subjective opinion of a TripAdvisor member and not of TripAdvisor LLC
tatianasader
Beirut, Lebanon
22
Reviewed 2 September 2019
Review collected in partnership with Accorhotels.com
This business uses tools provided by Tripadvisor (or one of its official Review Collection Partners) to encourage and collect guest reviews, including this one.
Ask tatianasader about Ibis Deauville Centre
This review is the subjective opinion of an individual traveller and not of TripAdvisor LLC nor of its partners.
lisaorbill
Burnsville, Minnesota
122
Reviewed 29 August 2019
A day in Deauville

The Ibis Deauville Centre was a lovely hotel very convenient to the train station and the beaches. We had been in Paris for 5 days and a day on the beach was a great time to relax and slow down. The hotel was clean and modern.

Review collected in partnership with Accorhotels.com
This business uses tools provided by Tripadvisor (or one of its official Review Collection Partners) to encourage and collect guest reviews, including this one.
Ask lisaorbill about Ibis Deauville Centre
Thank lisaorbill

Staff were not that interested in guests. They close the hotel bar at 11pm, don't have great selection of drinks. Some staff are helpful and others would rather you were not there. Once you get used to that and know what to expect, it sort of becomes funny.

Review collected in partnership with Accorhotels.com
This business uses tools provided by Tripadvisor (or one of its official Review Collection Partners) to encourage and collect guest reviews, including this one.
Ask Siobain M about Ibis Deauville Centre
Thank Siobain M

This review is the subjective opinion of a TripAdvisor member and not of TripAdvisor LLC
Dennis B
Sarasota, Florida
3028
Reviewed 7 August 2019
Nice hotel in Normandy

A very nice and clean hotel in Normandy. We used it as our base hotel as we explored the area. The staff was very friendly and helpful and the breakfast had a large selection.

Be sure and visit Honfleur, one of the most beautiful villages in Normandy.

Ask Dennis B about Ibis Deauville Centre
1  Thank Dennis B