Expedia.com
Hotels.com
Travelocity
View all 14 deals
Prices are provided by our partners, and reflect nightly room rates, including all taxes and fees known to our partners. Please see our partners for more details.
Payments made by partners impact the order of prices displayed. Room types may vary.
238lilyy
Durham, United Kingdom
11

If your looking for somewhere cheep & cheerful this is the place. Staff were friendly food enjoyable, kids enjoyed the pizzas and they loved spending time in the pool. We have used this hotel many times when using Manchester air port as the discount on parking is really reasonable.

Trip type: Travelled with family
See all 3,360 reviews
Payments made by partners impact the order of prices displayed. Room types may vary.
Nearby Hotels 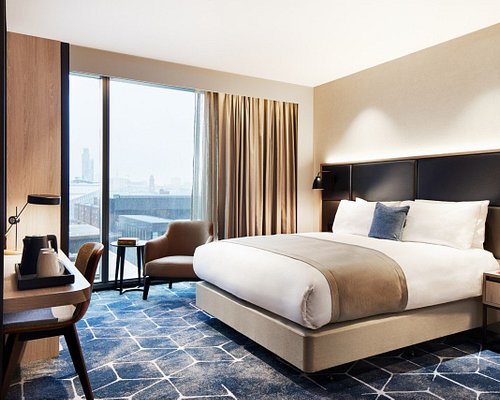 It seemed ideal. On the doorstep of Manchester airport, a hotel to stay and leave the car in a secure environment. The run up through the grounds looked promising. The car park however looked overgrown with weeds popping through. I got as far as the reception to be told we were staying at a sister hotel (not a pleasant one). No real explanation. No prior warning. There were plenty people going about who were residing there.

This review is the subjective opinion of a TripAdvisor member and not of TripAdvisor LLC
supertimesaway
Huddersfield, United Kingdom
269191
Reviewed 23 March 2020 via mobile
1st visit

My partner and I stayed at this hotel for one night before we travelled on our holidays. We left the car for seven days which was good and got a shuttle bus to the airport and back. What I didn’t like was having to walk past residents smoking some sort of drug by the front door into the hotel not very nice. I mentioned it to the receptionist and she looked at me as much to say yes I am aware but not going to do anything. We bought evening meal and breakfast the following day which I have to say was very poor. The rooms were ok warm and comfy. The only good thing I can say about this hotel is the bar prices were ok. Won’t be staying again.

Stayed here 1sr March as my husband and I was travelling to india early following morning ,has we checked in we went to our room which was ok..has night time came we decided to go to bed about 10.pm hour later kids were running up and down corridor and banging doors this went on for a while ..I went to reception to see if we could change rooms ,yes next floor unit was security guard that was on desk.so as we changed rooms got in lift the security guard was in lift and smelled of weed !!! Got out on our floor and all we could smell was cigarette smoke from rooms and also weed (dear god ) as we got into bed and just about to fall asleep load of lads decided to have a party next room .. I would advice not to book this hotel because I would not again .. digraceful

My wife and I booked two nights in March 2020. I requested a downstairs room as I am partially disabled and have walking difficulties. I received a booking with written confirmation of a "double disabled room". On booking in I was told that there was no downstairs room and we were allocated a first floor room. The lift doorway was too narrow to gain access in my wheelchair and I had to stand to use it. On reaching the room we found it was fitted with a standard toilet / shower (I need handrails to use a toilet without difficulty). My daughter addressed the complaint with the desk staff on my behalf and we were then allocated a downfloor room and she transferred our belongings. It was only some time later I realised that this room also had a standard toilet shower. There was also no dropped kerb at the entrance to the Hotel. If you are in need of disabled facilities I'd advise you to book somewhere else.

A welcomed Greeting by very professional staff. Michelle showed skills and understood client's needs during our treatments with excellent people skills. We felt like we were able to enjoy our day without feeling rushed and enjoy all the facilities. Afternoon tea was satisfactory although sandwiches slightly dry and cakes slightly soggy, but the scones were lovely. Cleanliness was good all around throughout the facilities. Good sauna/steam room and jacuzzi actually warm! Staff were attentive but not pushy. A good spa day overall.