After a long year myself and my partner were really looking forward to a break away! I have to say that this hotel is in the perfect location for touring the county and such a beautiful area. Upon arrival we were greeted at reception by two lovely receptionists, under such circumstances they made us feel at ease and welcome at the hotel.
The room was nice, could use a lick of paint and fresh carpets as there was a lot of staining on both the walls and the carpets.
We had dinner in the bar the first night and the restaurant on the third night! The food was incredible and the service was even better! Special mention to I think his name was DJ who went above and beyond for us for dinner in both the bar and the restaurant on both nights and was there for breakfast also, also a special mention to Anna who at breakfast each morning was attentive and helpful. Nothing was too much for the staff in this hotel!More

Show less
Trip type: Travelled as a couple
See all 1,592 reviews
Payments made by partners impact the order of prices displayed. Room types may vary.
Nearby Hotels 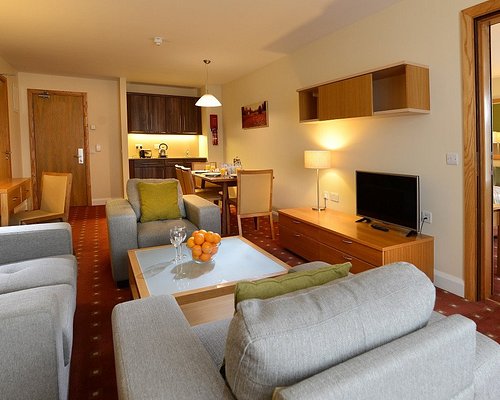 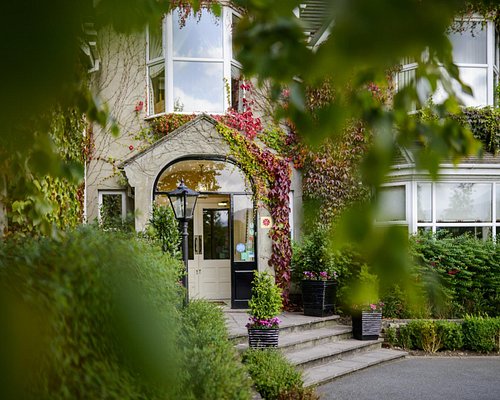 Reasonable priced hotel a 5 minute walk to the town , clean rooms good staff , big spacious lobby to relax .
Breakfast was served with a booking time to make sure no congestion each morning . I,d assume when restrictions are finally lifted you can go down anytime .
Had dinner in the restaurant one evening, battered fish and chicken pasta dish . Very nice.
Few beers in the bar ,the lads were all friendly and polite .
The room was 316 large room on the corner. Spacious and clean lots of storage . Wardrobe with safe . Tea and coffee with kettle .
Iron and trouser press . TV is a bit on the small side . Bed was very comfortable.
It is close to the vending machine just outside which can be quite loud when people use it late at night . When the bottle drops maybe some foam padding in the box to stiffle the bangs .
I would stay again as its a reasonable price to pay for what you get.

This review is the subjective opinion of a Tripadvisor member and not of TripAdvisor LLC.
thomaswF567MQ
72
Reviewed 1 September 2021
Definitely Not 4 Star

I have stayed in 3,4 &5 star hotels and this is not 4 Star hotel. This is your standard 3 star. I stayed in Kenmare Bay hotel the night before and it was much better value, half the price? Staff were friendly and location good. Really needs a significant investment to bring it up to 4 stars. Would be more honest to advertise as a 3 Star.

This review is the subjective opinion of a Tripadvisor member and not of TripAdvisor LLC.
Journey38645420054
Carrigaline, Ireland
31
Reviewed 15 August 2021 via mobile
Needs modernising & maintenance

Hotel requires some investment in both rooms & common area. Bedroom was old fashioned, carpet was dirty & bathroom was grotty. Breakfast was average - fruit was tinned and we were charged extra for Americano/lattes coffees. Overall, I wouldn’t recommend this hotel, it doesn’t feel like a 4 star.

This review is the subjective opinion of a Tripadvisor member and not of TripAdvisor LLC.
JonathanOD-Travels
25
Reviewed 14 July 2021
Nightmare ending to trip.

My partner and I stayed here for two nights on the 11th and 12th of July. We had received a €200 Select Hotels gift voucher as an engagement present and had been eagerly awaiting for restrictions due to Covid19 to ease, in order to travel safely. We researched the list of available hotel options within the Select Hotel group and settled on the Riverside Hotel Killarney for our stay. We booked two nights bed and breakfast directly through the hotel and waited excitedly for our first post-lockdown trip away. While checking in at reception on our arrival, we informed the receptionist that we had a Select Hotel voucher that we would be using as part payment for our trip and the voucher was in digital form as an attachment to an email. The receptionist asked if we could email the voucher to them so she could print it off and attach a copy to the payment form. We did this and then payed the balance. We received our room keys and off we went to explore the many delights that Killarney has to offer. We had food and drinks in the Hotel’s Riverside Bar on the first night and drinks on the second night. We arrived at reception on the final morning to check out and pay for the food and drink we had charged to our room, to be informed that the Select Hotel voucher we had provided as part payment was invalid, as we had booked directly through the hotel and not through the Select Hotel site, this was stated in the fine print on the printed-off voucher and had not been seen by us or the hotel receptionist on arrival. We argued that their hotel was indeed in the Select Hotels’ group and the voucher we had used was for a Select Hotel and had been accepted on arrival and printed off by the receptionist and were shocked to be informed of this at checkout. We were then told that under no circumstance could we leave the hotel without first paying the €200 instead of using the voucher, we disagreed and said the voucher had been given in good faith and was accepted in good faith and surely this could be rectified between the hotel and the Select Hotel group. The General Manager was then phoned and we believed this would be rectified and we could go on our way. The General Manager then told my partner that if we did not pay the €200 he would call the Gardaí and have them waiting outside for us. All of this transpired in full view of other hotel residents in the lobby area and to say we were mortified is an understatement. In order to put an end to this horrendous scenario, we paid the €200 and sat outside to gather our thoughts. My partner then rang the Select Hotel group directly, and told them what had happened, and the threat we had received of being arrested from the General Manager over the telephone. The extremely professional and empathetic staff member could not believe what we had been subjected to, and took all the voucher details and immediately called the hotel. She failed to make contact with the General Manager as he now could not be reached by phone, however we were instructed to return to the hotel and were promptly given a refund of the €200 and the voucher was returned to the hotel. This has been the most humiliating ordeal we have ever been subject to in any establishment and as life long, law-abiding citizens, the threat of being arrested over using a hotel voucher to stay in the hotel was extremely disturbing. We will never stay at the Riverside Hotel Killarney again and I hope they can learn from this most unfortunate event. Thankfully, the Select Hotel Group honoured their voucher, which the Riverside Hotel could have done from the start and resolved this situation in a professional and kind manner.

This review is the subjective opinion of a Tripadvisor member and not of TripAdvisor LLC.
shana1998x
Galway, Ireland
2
Reviewed 3 July 2021 via mobile
Staff are great 😊

Great location only 3/4 minutes from center. Every member of staff we encountered couldn't do enough for us. Rooms are quite and comfortable and spacious. Receptionist on check in was lovely and explained everything to us and was helpful with all questions. Didn't get her name but think she was in training.
With all of the covid restrictions didnt feel a lack of service at all.
Will be back.