Macdonald Morlich Hotel
2 people are viewing this hotel
Lock in the lowest price from these sites
US$189
US$132
Free cancellation until 15/05/21
View deal
PricelineUS$132
Expedia.comUS$132
Hotels.comUS$132
FindHotelUS$189
eDreamsUS$132
HurbUS$145
View all 16 deals
Prices are provided by our partners, and reflect nightly room rates, including all taxes and fees known to our partners. Please see our partners for more details.
Payments made by partners impact the order of prices displayed. Room types may vary.
Frews43
Glasgow, United Kingdom
2014

Booked a three night stay at The Morlich Hotel for my husband's birthday but was totally dissapointed.Its not what I imagined it to be from the description on their website. It is certainly not a boutique hotel quite dated with no atmosphere within the hotel,but understandable due to all the restrictions.Good location but definitely not for a romantic getaway,more of a Haven feel to be honest.We never used any of the facilities as we toured around the surrounding area.No maid service but the room was clean on arrival,you had to go to reception for fresh towels,tea & coffee etc but i have never been to a 4 star hotel that does not include bottled water in your room which is always a nice touch.Breakfast needs improvement the staff are very attentive but the food luke warm,a full Scottish breakfast it is not,cost cutting before presentation,very small portion and even half a slice of black pudding,no haggis which surprised me,so breakfast was poor quality.Very dark in the evening not adequate lighting in the hotel grounds.Poor customer service at checkout was not asked if we enjoyed our stay no interaction from member of staff.Avimore and the surrounding areas beautiful but Hotel Morlich needs to step up their game in this current climate just too many negatives for me.More

Show less
Trip type: Travelled as a couple
See all 286 reviews
Payments made by partners impact the order of prices displayed. Room types may vary.
Nearby Hotels 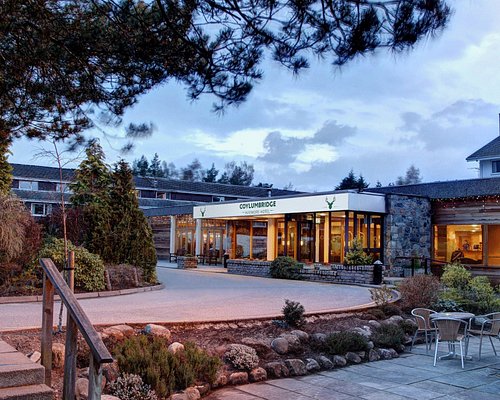 Coylumbridge Aviemore Hotel
US$124
US$73
Booking.com
View deal
Free cancellation
Reserve now, pay at stay
Priceline
US$73
Expedia.com
US$94
StayForLong
US$124
View all 19 deals from US$73
4,164 reviews
2.3 km from Macdonald Morlich Hotel 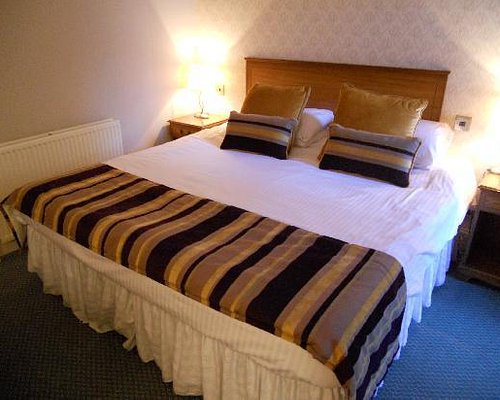 Breakfast included
Cairngorm Hotel
US$146
US$139
Tripadvisor
View deal
Free cancellation
Expedia.com
Hotels.com
StayForLong
US$146
View all 14 deals from US$139
1,033 reviews
0.2 km from Macdonald Morlich Hotel
We compared the lowest prices from 14 websites 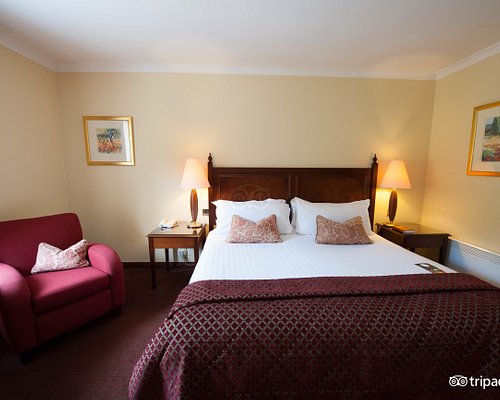 Hotels.com
View deal
Booking.com
US$230
Official Site
US$190
CheapTickets
US$231
View all 17 deals from US$190
2,104 reviews
0.3 km from Macdonald Morlich Hotel
We compared the lowest prices from 17 websites
Breakfast included
Ravenscraig Guest House

This was the 2nd stay of our visit to Scotland

Check in was quick and without much fuss. Room was on the 3rd floor from all the hustle and bustle. Not sure if the hotel was full, but there was relative little noise to disturb us

Room was comfortable and clean. The room service was in 2 stages. Any stay less than a certain amount of days (4 I think) and there would be none, although you could request items. This was not an issue as we were only staying 2 nights. This I found actually quite good as it reduced the excessive laundry of towels etc. that you normally find in some hotels and hence doing our bit for conservation)

Our package include breakfast as well as vouchers for the evening meal (£25 pp per night but only for the food portion). This you could use at either Giovanni or the Aspect restaurant. For both nights we used Aspects and really enjoyed the food choice. Although on the 2nd night the kept giving us the wrong menus (no biggie). After the meal we popped down into the bar for a few drinks

Breakfast was OK but fairly basic and mostly cold. Service could do with improving as we had to keep prompting the staff for items (drinks, condiments and actually to get some service)

The biggest issue was that you had to book slots for either off the meals. The slots we could get for breakfast were either very early of late in the morning (half 10 onwards). With the Evening meal we seemed to have a better choice of slots at more reasonable times

All in all a most an enjoyable stay

Room tip: Make sure you book your meals early! Might want to book them in advance prior to actually getting to the Hotel
Ask W3sS about Macdonald Morlich Hotel
Thank W3sS

This review is the subjective opinion of a TripAdvisor member and not of TripAdvisor LLC
MM0TDS
Aberdeen, United Kingdom
64
Reviewed 20 September 2020 via mobile
Morlich hotel Avimore

My wife and I decided to have a couple of days away in Aviemore and after searching for deals we decided on the Morlich with getting dinner bed and breakfast for a good rate.
The room was good with a comfortable bed, clean and tidy and the bathroom was also good but the shower had a lack of pressure.
On reading some of the previous reviews we decided to eat in the other hotel in the resort as the Italian restaurant didn’t have great reviews. On arrival at the other restaurant we were seated quickly and the tables were well spread out. Our order was taken quickly and arrived in a reasonable time also.
I had a chicken burger and the wife had a normal burger. Mine was fine but the wife’s burger was still a bit raw inside at the centre so she didn’t finish it. The chunky fries that came with them were good but overall it was a little disappointing.
The sweets didn’t fare that much better with my sticky toffee pudding being quite dry and a lack of toffee sauce didn’t help.
So we would go back to the hotel but would choose to eat else were for dinner.
The breakfast was ok with plenty of choice and tasted great.
The Covid precautions were adequate with plenty of hand sanitiser around and social distancing.

This review is the subjective opinion of a TripAdvisor member and not of TripAdvisor LLC
858andrewj
Alnwick, United Kingdom
4
Reviewed 20 September 2020
underwhelmed and upset

Nearly £150 per night expected a much better experience.A standard hotelroom probably worth £80-85 per night max.Clean but basic,staying 2 people 2 nights had 2 biscuits, one shower gel one shampoo. Shower very slow definately NOT a power shower. Sink had leak noticed in morning after first night, would have left but floor waqs getting a bit flooeded. Reported to reception who said she would add to maintainence mans list. Went for run told reception lady would be out she said fingers crossed he would look at it. FIVE hours later he had not. Rang down to let them know and said I now couldn't relax in my £150 per night room as I had to wait for the man knocking. She let out a long sigh and said he would be round when he could, we were on the list for the day, would I like to move room, I said yes,. So after packing all my kit and my husbands as he was working, the maintainance man came to the door -no mask,no gloves !! in meantime receptionist came to door with new keys.I proceeded to move 2 heavy bags and a few more bags,no offer of help. New room right next to lift so can hear every movement of the lift which is NONSTOP ! so won't be gettingmuch sleep tonight !! Breakfast another discgrace. Had to ask to be served after our initial order for tea and coffee. 15 Mins later they brought husbands breakfast.A further 15 mins had to ask for mine. Husband had left at that point to go to work. Not happy with service or room and definately not worth £290 for 2 nights of my very hard earned money. Will not be staying again andwould recommend a booking at another venue without the stroppy staff and sub-standard rooms !!! No apology for room by the way.

This review is the subjective opinion of a TripAdvisor member and not of TripAdvisor LLC
raymondp783
Sunderland, United Kingdom
157115
Reviewed 19 September 2020 via mobile
Late booking excellent service

We booked last minute for this hotel so we didn’t do a lot of checking out, however we were pleasantly surprised to find a really modern and friendly and comfortable hotel set in lovely grounds and within easy walking distance to the centre of Aviemore, our room was very clean and comfortable and the breakfast was excellent, All the staff were very professional and friendly, we would certainly return and recommend this hotel
Great stay.