US$194
US$148
View deal
SAVE US$46
Free cancellation until 23/06/21
PricelineUS$175
Hotels.comUS$175
getaroom.comUS$194
View all 18 deals
Prices are provided by our partners, and reflect nightly room rates, including all taxes and fees known to our partners. Please see our partners for more details.
Payments made by partners impact the order of prices displayed. Room types may vary.
trendytraveller123
1324

Staff were very helpful, service good. We had dinner in the restaurant which was very nice indeed. Breakfast is understandably no longer self service but top class and plentiful. The room was clean and well maintained with a lovely view over the river and bridge. The only problem was the leisure area. We booked a session in the gym but they booked us into the pool in error. The lady at the gym reception was not at all apologetic or helpful, but we did eventually manage to get in to the gym for half an hour. That apart it was very nice stay in a lovely hotel.

Room tip: Second floor is handy for the gym and pool area.
See all 2,538 reviews
Payments made by partners impact the order of prices displayed. Room types may vary.
Nearby Hotels 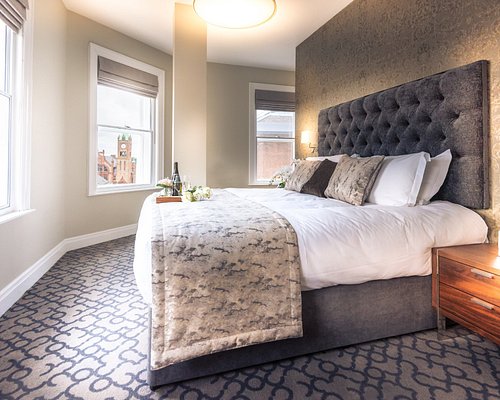 Top Rated
Breakfast included
Shipquay Boutique Hotel
US$205
US$197
Booking.com
View deal
Free cancellation
Priceline
US$197
Expedia.com
US$197
Hurb
US$205
View all 17 deals from US$196
653 reviews
0.3 km from City Hotel
We compared the lowest prices from 17 websites 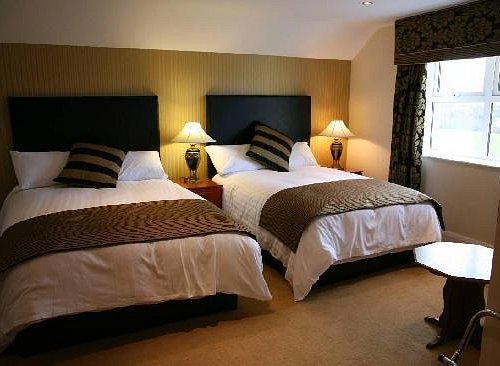 Hotels.com
View deal
Travelocity
Agoda.com
US$59
Booking.com
US$74
View all 14 deals from US$59
242 reviews
0.3 km from City Hotel
We compared the lowest prices from 14 websites
Great value today
Sponsored
City Hotel
US$148

I booked a standard room for 2 nights bed and breakfast at a very reasonable price. When booking I stated it was for a 30th birthday trip and was a little disappointed the hotel didn’t do anything to acknowledge this. On arrival our room wasn’t ready and we were advised to take a seat and order a drink which we could charge to our room. Well we sat and waited and then approached the bar to order a drink but was advised it was table service only. We waited another 20 mins and no one came to take an order from us at all. This happened on a few occasions in the lobby and I was disappointed as could see plenty of staff behind the bar and it was never very busy. The standard room was fine, clean and a decent size. However a fridge and a shower screen instead of curtain would be much more hygienic. We had room service breakfast on both mornings which arrived on time and the food was fresh and hot. However I was disappointed there were no pastries, croissants etc to order. Possibly available in restaurant but no option to order on room service form. Hotel is ideally located and has free secure car parking which a lot of other hotels don’t have in this area. On checkout it turned out we had been overcharged £40 on arrival which the receptionist apologised for and refunded. All in all a decent hotel but I don’t think I would return, there are much better hotels close by.

This review is the subjective opinion of a TripAdvisor member and not of TripAdvisor LLC
cb1195
Coventry, United Kingdom
13763
Reviewed 18 September 2020 via mobile
Great location

We stayed for 1 night during a trip to Derry. The room was adequate and clean with everything you could need. The weather was unseasonably warm but the room was still a lovely temperature. The hotel is less right by the peace bridge, less than 5 mins from the city centre and less than 10 mins from the Bogside if you are interested in a tour. All staff we came across were lovely and there is bar in the hotel which you can drink in without food which is great touch in the given climate

This hotel is truly a gem located in a remote area. I experienced excellent service and the food was always 5 star from the restaurant or room service. Rooms are large, clean and staff were extremely helpful and friendly . Amazing and the hotel was quiet during my stay. Thanks Mr. Manna and abdul in the restaurant Mr. Saiful islam in bar

This review is the subjective opinion of a TripAdvisor member and not of TripAdvisor LLC
rh2473
Carrickfergus, United Kingdom
63101
Reviewed 7 September 2020 via mobile
Not impressed..

Wife and I stayed here for 2 days. Booked the 2 night B&B package and one evening meal. Package came apparently with a walking tour. I wasn’t particularly interested in the tour however staff never discussed it with me anyway. The hotel is central and well located. The room was average, comfortable and warm. The view from the window was nice to be fair. None of the rooms, we were told have safes. Some have fridges so we moved room to have one.
The bathroom was old and dated and had the added benefit of long black hairs on the walls on arrival. Obviously hadn’t been cleaned properly. The bathrooms are reasonably well stocked with the usual stuff. The bedroom is quite big however the tv in the room you’ll need to sit right beside or squint. Tvs these days are cheap. To put a tv that’s under 20” in the room is crazy.

Went for our included meal on the second night. 40 minutes from walking in we were still waiting for our starters. Table beside us got the same starter after being there only 10 minutes. When quizzing the waitress she tells us at the 25 minute point that bruschetta takes 10 minutes to cook. (Nonsense!) Another told us the truth shortly after, that they had forgotten the order. Folks really, don’t lie, people will understand. When you lie it makes it all the worse.
Wife ordered steak which was advertised as ‘served with jus’. It actually came with pepper sauce. Waitress tried to imply that the pepper sauce was the jus. Eventually she offers to bring jus. And out it came.
Food was basic, I ordered haddock. The fish was bland however haddock can be. The batter certainly was not beer batter as advertised. It was thin and soggy. Not full of air and crispy as you would expect. Chips were average. Would add we were not offered water, tea or coffee. The staff appeared young and inexperienced. At the time we arrived for our meal there were 3 tables to serve. Took one hour 35 minutes from start to finish and was asked 5 times was everything okay. When the older waitress was told ‘well no!’ , she seemed uninterested and walked off anyway.
It has been years since we’ve stayed here and it’ll probably be years before we go back if at all.
Pool was clean and 45 minutes slots pre-booked meant I got the pool to myself.
The car parking at the hotel is an absolute nightmare. The spaces are tight and few. When the the car park fills that’s it, the barrier shutters come down and you will be charged locally to park. There is no way to reserve a space. Staff informed me that the general public use the spa facilities and can park here. Seems incredible that a resident can be denied a space for someone having a swim for 45 minutes. The car park is in no way big enough to accommodate the entire hotel residency. Folks look after the small stuff and listen to your customers when they tell you the service is not up to scratch. Oh and don’t LIE about what’s happening in the kitchen! Really not impressed! Made my issues clear to the manager Gary on leaving. Gary was polite, apologetic and told me that he would speak to his staff. Really didn’t help me with a ruined meal.
In summary the hotel is starting to look dated, most of the staff are helpful and polite but you will wait a ridiculously long time for your meal in an empty restaurant.

This review is the subjective opinion of a TripAdvisor member and not of TripAdvisor LLC
itsjoycereilly
Cavan, Ireland
914
Reviewed 6 September 2020 via mobile
Amazing

My boyfriend and I stayed here for five nights. I simply cannot fault the place at all. The staff are so friendly and accommodating and full of conversation. The drink is cheap and the table service is unbelievably relaxing. The location of the hotel is simply perfect. The food at the hotel is delicious. The bedrooms are lovely and comfy and clean. I would highly reccomend this hotel to anyone considering a night away. From the minute you arrive to the minute you leave, the staff are so accomodating. Again, simply cannot fault the place and I was so impressed.