US$124
View deal
PricelineUS$121
TravelocityUS$122
TraveluroUS$139
View all 19 deals
Payments made by partners impact the order of prices displayed. Room types may vary.
Prices are provided by our partners, and reflect nightly room rates, including all taxes and fees known to our partners. Please see our partners for more details.
DvrDawg
Cork, Ireland
168166

Room was Small -but, Staff and Location was Great!

I rented a few rooms here when we attended the Derry Halloween Festival - while the festival was a bit of a bust - loads of rain - the hotel and the staff were amazing. The rooms were a bit on the small side -but, I'm not too concerned about that since I only use the room to sleep in and then spend my time out exploring. Initially, we had an issue with the heat/AC in our room. But, the staff went above and beyond to get us situated in another room. The hotel offers a robust breakfast -I'm not sure of the hours, but, it seemed like it closed early vs other hotels I have stayed at (like 8:30 a.m.). But, there are other nearby places to grab a full breakfast (like The Pickled Duck -but get there right about 10 a.m. when they open because it will be full by 10:20). From the hotel, there are many places to eat and many historical places in easy walking distance. You have to park across the street in the shopping center garage -but, the hotel validates and you only pay about €12 per day. All in all - a great place to stay and explore Derry!More

Show less
Room tip: Keep the windows closed - you are in the city and I was surprised by the difference in noise level with the windows shut vs open.
See all 129 reviews
Payments made by partners impact the order of prices displayed. Room types may vary.
Nearby Hotels 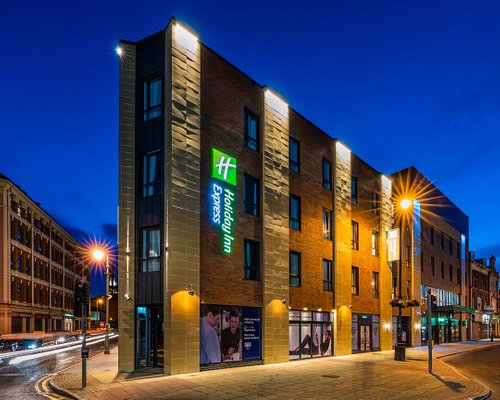 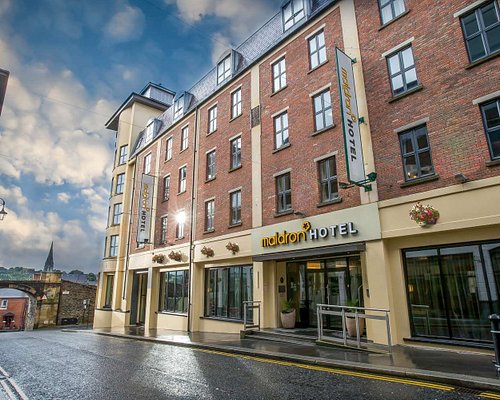 Priceline
View deal
Free cancellation
Traveluro
US$127
Agoda.com
US$96
FindHotel
US$99
View all 10 deals from US$96
634 reviews
0.3 km from Holiday Inn Express Derry - Londonderry, an IHG Hotel
We compared the lowest prices from 10 websites
Legenderry Bed & Breakfast
US$110

Expedia.com
View deal
Pay up to 12X
Booking.com
US$110
Priceline
US$110
Tripadvisor
US$106
View all 16 deals from US$106
188 reviews
2.9 km from Holiday Inn Express Derry - Londonderry, an IHG Hotel
We compared the lowest prices from 16 websites
Great value today
Sponsored
Everglades Hotel
US$137

Would recommend this hotel highly, the staff were absolutely brilliant and the room was very comfortable and quiet for a good night's sleep. The Hotel is right in the centre of Derry with plenty of nightlife around. Will definitely return sometime.

This review is the subjective opinion of a Tripadvisor member and not of TripAdvisor LLC.
Gaildorfblues
County Donegal, Ireland
225882
Reviewed 23 September 2021
Maybe we were unlucky but bring ear plugs, just in case.

Both the hotel & Quayside multi-storey car park (the car park recommended to us by the hotel) where easy to find as we drove into the city via Killea. A busy car park but we got a space after we went up several levels. We validated our ticket in the car park but could have also validated it in the hotel, price = 12Gbp for 24 hours. The car park pedestrian entrance/exit is literally across the street from the hotel.
It was immediately apparent on entering the hotel that it was busy, very busy & also very evident that there were a number of stag & hen parties present which clarified to me why I got a call ( might I add, a very friendly call) on the previous day from the hotel asking if our group of 4 adults & 2 teenagers = 3 male/3 female in 3 rooms was such a party as we would have to pay a deposit if we were. Check in was quite slow as the reception area was so busy with a lot of guests gathered there & at the lifts which were adjacent to the reception desk. It was a friendly & informative check in during which we were given info on the Wi-Fi code, hotel facilities, check out time & breakfast times & the need to book a time for breakfast. We also paid on checking in.
With 2 room keycards in hand, it was in to one of the 2 lifts & up to our 1st floor room. A nice sized room with a carpet floor, clothes rail, full length mirror, luggage rack, hairdryer, tea & coffee, iron & ironing board, wall mounted tv, double bed, sofa bed, small table, chair, smoke alarm, air con & plenty of electrical sockets. WiFi was excellent, quick & easy to connect to with member connect, fast speeds & consistent. A good sized window let in plenty of natural light but unfortunately, there was noise from the busy road outside, both traffic & people.
The bathroom was reasonably spacious with fully tiled walls & floor, a shower enclosure with an easily controlled shower c/w rain head on a rail, good pressure & any amount of hot water. There was a large mirror, shaver socket, plenty of towels, wall vent, conditioning shampoo/shower cream in dispenser & handwash cream in a dispenser.
After offloading our luggage in our room we went down for a drink as we had some time on hand before we met up with other family members. Our order was taken at our table by a server/waiter who then brought our drinks to us. When we popped in for a nightcap much later, after returning from the function that we were attending elsewhere, the bar was packed with a lot of guests ordering from the bar even though this was not permitted according to the covid info sheet that we were given when checking in & even though there were a number of security staff who were making sure that people were seated & socially distancing correctly.
We had major issues with noise from one of the adjoining rooms. It was clear that there was a party or get together there as we could hear numerous people coming & going, loud music & constant noise. When it became apparent that the party was not going to end without involving hotel staff, I decided to phone down to reception. My first call appeared to be fruitless as the noise relented but then quickly recommenced. I rang down for the 2nd time at around 04:00. The phone wasn’t answered but a staff member knocked on our door a minute or so later & told us that he had heard the call & seen our number & had come straight up to put a stop to the party, which thankfully he did but at this stage, the damage was done.
We booked breakfast (Sundays 07: 00 - 10:30) for 10:00. We went down at 10:00 & the queue stretched back to the lifts but did move fairly quickly. Buffet style with toast, croissants, chocolate muffins, cereals, porridge, yoghurts, fry, whole fresh apples, oranges & bananas, coffees, teas & apple & orange juices in small cartons.
We checked out at 11:00 when, I again raised the issue of the noise. The gentleman that was checking us out was aware of the issue as he was the staff member that came up at 04:00 & put a stop to it. He again apologised & I would hope that hotel management had been informed of what we had experienced. Even though I did not ask, I was surprised that we were not offered any form of compensation by way of a partial refund, future hotel credit or IHG bonus points, there & then, but no offer was made nor has been made since. It was a pity as it could have been a nice stay as the room, the breakfast & the location were very good & all staff that we interacted with, particularly at reception & the waiter/table server in the bar (from The Dominican Rep) were excellent.
We could have, would have, tolerated the odd noisy, drunken guest making his or her way to their room in the early hours but the racket that we were subjected to for several hours, totally ruined our stay & I doubt that we will return.

This review is the subjective opinion of a Tripadvisor member and not of TripAdvisor LLC.
ClaireLauro
Glasgow, United Kingdom
817
Reviewed 18 September 2021 via mobile
Steer clear if you value rest and sleep

Don't stay here if you want to sleep at all. Would suggest this hotel is probably more suited to trips for younger groups, maybe hen parties and stag nights. Not appropriate if you're looking for a peaceful night. It's also near a very noisy area of the city. One bonus is that it's very near the city and points of interest, but it comes at the cost of sleep!

Room tip: No parking, you have to use multi story carpark across the road that's part of a shopping centre.
Trip type: Travelled with family
Ask ClaireLauro about Holiday Inn Express Derry - Londonderry, an IHG Hotel
1  Thank ClaireLauro

Thanks for your review and for staying with us. We offer brilliant basics and a little more where it matters most. I am sorry for the noise challenges you encountered during your stay. I recognize this was a letdown and shared these with the management. I have also sent you a private message to obtain additional information.

Again, thanks for your feedback. We hope to have another opportunity to provide you with a better stay.

Report response as inappropriateThank you. We appreciate your input.
This response is the subjective opinion of the management representative and not of TripAdvisor LLC
C3136ATalland
1
Reviewed 13 September 2021
Walking Holiday

Had an excellent stay with our walking group for 6 nights. The staff were brilliant from the start of the holiday to the finish, very helpful and nothing was too much trouble. My wife need medical assistance at the hotel and the staff were very attentive and caring whilst waiting for the ambulance, The hotel is ideally situated in the centre of Londonderry.

This review is the subjective opinion of a Tripadvisor member and not of TripAdvisor LLC.
S5267LYpaulb
3
Reviewed 10 September 2021
Excellent holiday at the Holiday Inn

We had an excellent 6 day stay in beautiful Londonderry. The staff at the hotel couldn't be more helpful, the food was great and rooms bright and comfortable. The 48 people in our party appear to be very happy. Thank you all at the Holiday Inn Londonderry.