US$100
US$64
View deal
SAVE US$36
PricelineUS$75
Expedia.comUS$75
travelup.comUS$100
View all 16 deals
Prices are provided by our partners, and reflect nightly room rates, including all taxes and fees known to our partners. Please see our partners for more details.
Payments made by partners impact the order of prices displayed. Room types may vary.
Noeleen H
Edinburgh, United Kingdom
4328

Really pleasant staff at this Hotel. The buffet breakfast is off because of the Covid-19 restrictions and to be honest I expected a bit more. Bacon rolls provided but very dry and the bacon had obviously been cooked a while before. Our room was next to a busy road junction so was really noisy. Lot of dust (been there a while) between the window and secondary glazing. Thought that was a bit off - obviously no deep cleaning done in that room! Fine for a short stay. The best of this Hotel is most definitely the front of house staff.More

Thank you for your recent review. It is disappointing to read you found our cleanliness not up to our usual standard. Rest assured your comments will be passed to our Housekeeping department for rectification before we rent out the room again. I am sorry you were expecting more from our breakfast. This is an area that is always under review so hopefully you will see more items being added within the coming months.
I hope the issues you faced have not deterred you from staying with us again in the future

Report response as inappropriateThank you. We appreciate your input.
This response is the subjective opinion of the management representative and not of TripAdvisor LLC
See all 1,435 reviews
Payments made by partners impact the order of prices displayed. Room types may vary.
Nearby Hotels 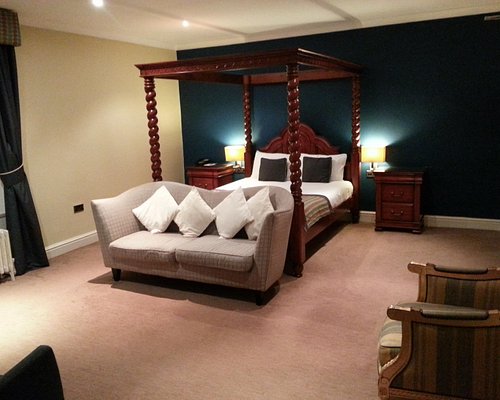 Hotels.com
View deal
Free cancellation
Pay up to 12X
Booking.com
US$94
Trip.com
US$82
StayForLong
US$109
View all 18 deals from US$82
2,464 reviews
9.5 km from Holiday Inn Express Newcastle City Centre

I stayed here for two nights for work.

The hotel is well placed for the city and the staff are very friendly and polite. Check in was straight forward with all COVID-19 precautions in place.

A reduced menu is on offer which is eaten in your room or you can bring in / order in your own food.

There isn’t a hotel car park but you can park in the multi storey next door for about £5 a day.

Thank you for taking the time to leave us such a wonderful review. I know our team will be delighted with your kind comments regarding their service.

We hope to welcome you back to hotel soon

Report response as inappropriateThank you. We appreciate your input.
This response is the subjective opinion of the management representative and not of TripAdvisor LLC
Mels438
The Lake District.England
2119
Reviewed 8 March 2020 via mobile
Good value for money

Booked 1 night here to go see a show.Very good price,clean but simple hotel and really good central location.Nice indian and Thai restaurants just over the road and a little corner shop nearby too.Friendly ,helpful staff.
Ask for a room on higher floor and at the back of hotel,as they are quieter.

Thank you for your 5 star review, we are glad to hear you enjoyed your experience here with us at The Holiday Inn Express, we aim to offer brilliant customer service to all out guests.

We hope to welcome you back In the future,
Kind Regards
Leah Corkin

Report response as inappropriateThank you. We appreciate your input.
This response is the subjective opinion of the management representative and not of TripAdvisor LLC
chrisp1000
High Spen, UK
10976
Reviewed 7 March 2020 via mobile
Beware the building site and poor mattress

We turned up to find the whole hotel was a building site with scaffolding and netting covering the whole exterior. When we showed surprise at this on checking in we were told that there was a massive banner across the top of their website telling people about it. Well, there wasn't when we booked and I would argue that there isn't now (it's small and you have to click into it to read it). I was surprised not to have received an email about is as last time when we stayed at the Premier Inn in town they emailed us about building work being carried out and offered a refund which we didn't take but it was nice to be offered.
There were builders in hi-vis right outside our window at 2pm when we checked in, drilling was still going on just before 6pm when we came back to chill before a night out. We were very happy that they didn't start drilling until after 10am on the Saturday morning. We didn't want to open the curtains though!
The reception staff were excellent, Michael in particular being extremely helpful and he did get us a very quiet room, we did swap from the first we were allocated as the window didn't shut very well.
The mattress in the room was very poor. Here's a tip to hotels - if the mattress is so old that you roll into the middle of it then get a new one. A mattress topper isn't going to sort out a mattress that has lost its springs. So I don't have a very good night's sleep as I was constantly rolling around into the middle which isn't great when there's two of you. It's only a double bed too rather than a king so a good mattress is really essential. I mentioned it at reception and again they are very polite and professional and said they would report it. We didn't have breakfast as we needed to try and get more sleep.
We have stayed here before and had a good stay so I am giving a 3 rather than a 2 but we would probably wouldn't stay again.

Thank you for leaving a review for us, I am sorry to hear the experience you had with us wasn't at a 5 star standard. We are getting necessary work done to the exterior to the hotel, we have set this work as business hours to create the least disturbance as possible to our guests.

I am glad to hear you had a good encounter with our staff and will pass on your kind comments to Michael , We hope to welcome you back in the future.

Report response as inappropriateThank you. We appreciate your input.
This response is the subjective opinion of the management representative and not of TripAdvisor LLC
Laura9887
Hartlepool, United Kingdom
3
Reviewed 7 March 2020 via mobile
Great hotel

We have stayed here quite a few times rooms are always clean and comfortable. There was some building work going on at the time we stayed but this wouldn’t put me off going back although I think it could of been better stated when booking a room.

This review is the subjective opinion of a TripAdvisor member and not of TripAdvisor LLC
DPR1
Banbury, United Kingdom
5039
Reviewed 1 March 2020 via mobile
A functional stop over

The first challenge was finding the hotel behind all of the plastic hoarding that they have completely covered the outside with.
The room was comfortable and quiet.
The breakfast, which was included in the very reasonable room rate, was OK.

I appreciate you for staying at Holiday Inn Express Newcastle City Centre and for giving us your thoughts about your recent visit.

I know that you were having trouble finding our hotel. I'm so sorry for all the hassle. The circumstances you have mentioned are not what I want you to experience with any of our properties. Reviews like yours are very valuable as they enable us to target areas we need to improve on. I'll definitely share your thoughts with our hotel management team as a reference for future enhancements.

Your feedback will help us towards bettering our services and we hope to host you again soon.

Report response as inappropriateThank you. We appreciate your input.
This response is the subjective opinion of the management representative and not of TripAdvisor LLC
View more reviews
PreviousNext
1234…240