US$92
US$64
Free cancellation until 22/04/21
Reserve now, pay at stay
View deal
Booking.comUS$64
Hotels.comUS$64
PricelineUS$64
eDreamsUS$64
StayForLongUS$92
Orbitz.comUS$64
View all 18 deals
Prices are provided by our partners, and reflect nightly room rates, including all taxes and fees known to our partners. Please see our partners for more details.
Payments made by partners impact the order of prices displayed. Room types may vary.
Lizzieb187
Derbyshire, United Kingdom
610

Our first staycation during COVID19 and our first trip to Norwich. Hotel and room was clean and comfortable. Staff were very welcoming and friendly during our five-day visit. We requested that our room not be cleaned each day and this reduced the number of people entering our room. There were sanitizing stations all throughout the hotel. Breakfast was very well co-ordinated. There was still a decent choice of a cooked breakfast, cereals, juices, fruit, toast and croissants - you could also choose to take a tray back to your room if you were uncomfortable eating in the dining room. My only gripe was that you only get half a cup of tea or coffee but just ask for a jug of hot water to top it up. Our room overlooked the front of the hotel. There is a car park next to the HIE car park which could get noisy at night - but that isn't the fault of the hotel and it didn't last long. We would definitely return here again. Norfolk is a beautiful county with many interesting places to visit (even during these strange times). Thank You to all the hotel staff for making our short break such an enjoyable experience.More

I hope to see you again soon.

Report response as inappropriateThank you. We appreciate your input.
This response is the subjective opinion of the management representative and not of TripAdvisor LLC
See all 577 reviews
Payments made by partners impact the order of prices displayed. Room types may vary.
Nearby Hotels 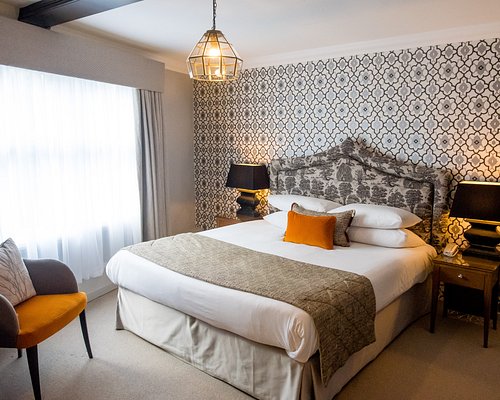 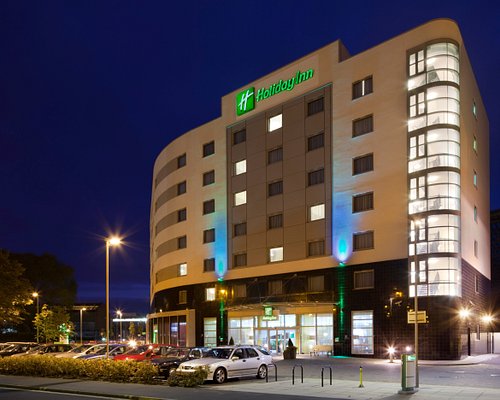 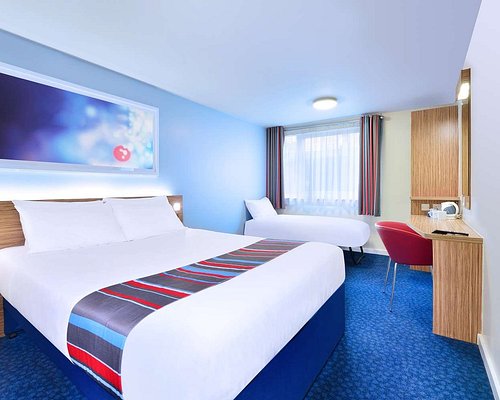 Travelodge Norwich Central Riverside
US$52
US$38

Priceline
View deal
StayForLong
US$52
Agoda.com
US$39
FindHotel
US$39
View all 12 deals from US$38
744 reviews
3.9 km from Holiday Inn Express Norwich

Expedia.com
View deal
Free cancellation
Pay up to 12X
Booking.com
US$93
Agoda.com
US$91
getaroom.com
US$95
View all 16 deals from US$91
836 reviews
4.0 km from Holiday Inn Express Norwich
We compared the lowest prices from 16 websites
Holiday Inn Norwich North Hotel
US$84

Expedia.com
View deal
Free cancellation
Pay up to 12X
Hotels.com
US$84
ZenHotels.com
US$70
StayForLong
US$109
View all 15 deals from US$70
589 reviews
1.7 km from Holiday Inn Express Norwich

First time I have visited Norwich and got a great deal for bed and breakfast for me and my fiancée. Due to Covid it was a bit strange but the hotel handled it very well it was a bit slow checking h in but that was fine as there was a few of us at the same time. The room was very clean, tidy and comfortable. The staff very helpful and friendly. The evening meal was very good. Breakfast was handled extremely well under the circumstances and the food well cooked and piping hot. Again the staff were brilliant. Would be happy to stay there again and hopefully will do in the not too distant future

Thank you for your kind review. I am happy to read that we handled the covid restrictions well and that the room was clean, tidy and comfortable. It's also great to read that the team were helpful and friendly and that you enjoyed breakfast and dinner.

I look forward to seeing you again soon.

Report response as inappropriateThank you. We appreciate your input.
This response is the subjective opinion of the management representative and not of TripAdvisor LLC
sdsdeeley
Hastings, United Kingdom
1314
Reviewed 21 September 2020
Good Covid-19 measures

The hotel staff were excellent, Friendly, Helpful and covid safety aware. The hotel was clean and well maintained, they had put good Corona virus measures in place and I felt comfortable and safe. (The outside of the hotel adjoins the David Lloyd leisure club which was extremely tired and tatty but don't let that put you off,) The hotel is just off the city ring road and made an excellent base for going out to explore Norfolk.

Thank you for your kind review. I am happy to read that the team were happy and friendly and that the hotel was clean clean and well maintained. We have worked hard on our Coronavirus measures whilst trying to maintain good service so I am happy that you can see that.

I hope you can visit again soon.

Report response as inappropriateThank you. We appreciate your input.
This response is the subjective opinion of the management representative and not of TripAdvisor LLC
andrewkD8298IM
Madrid, Spain
99
Reviewed 6 September 2020 via mobile
Nice people. It’s a tired place

First of all I have to say the staff were lovely. Polite efficient and responsive. Sadly though, the place was a metaphor for this country. Tired, falling to bits and a bit tacky.

Two nights we stayed. The room we were first given had a hole in the bathroom floor and the net curtains were brown in places. So we moved and the new one looked like someone has been skating on the dressing table. The paint was chipped and scuffed here and there. But hey, it was better. Inevitably however, the room key stopped working and the toilet bunged up.

I thought the place was quite clean but my Wife smiled and said ‘its superficial’ pointing out the dust on the switch casing and the sticky threshold between the bedroom and bathroom.

The breakfast was served quickly with a smile. But the sausages came from the sausage factory, the bacon from the bacon factory and the scrambled egg from the powdered egg factory. (And obviously fried, boiled or poached weren’t available because that would be too near to fresh - likewise the case I guess for the absent tomatoes, mushrooms. ...... or anything else that could be fresh) so nothing much to go wrong there - or right for that matter.

And the whole system-built concrete thing sits at the bottom of an ASDA car park next to a derelict place that looks like a massive dirty, petrified igloo.

Would I go back. Well yes. Because the bed was comfy, the sheets were clean, it was cheap and I do superficial (unlike my wife). And mostly, I know that when things go wrong, which they inevitably will, the nice staff will be there to cheerfully put things right.

Nevertheless, my message to the top bid of Holiday Inn (uk) and it’s board of directors is: Not good enough guys. Knock it down. Don’t be superficial. Don’t be the Ryan Air of hotels.

Thank you for your review. I'm happy to read that the team were lovely and that they were polite, efficient and responsive to your needs. It's great to read that were helpful for any issues that you had.

We are having a full refurbishment of the hotel very soon which we are all excited about. We are also replacing the key lock system which will also rectify the issue with this. We are hoping that a business will move into the neighbouring 'igloo' soon so that it can made to look a nicer.

Our complimentary breakfast is designed to be for those on the go and is a continental offering with some hot items. I will pass on your feedback about our hot items to the kitchen team however we will not be able to offer tomatoes or mushrooms as this is not a Holiday Inn Express brand standard.

I hope to welcome yourself and your wife back when we have a nice new hotel.

Report response as inappropriateThank you. We appreciate your input.
This response is the subjective opinion of the management representative and not of TripAdvisor LLC
SamanthaKM
Ipswich, United Kingdom
5627
Reviewed 27 August 2020 via mobile
Do not stay here!!!! Left with no room

Awful experience. Booked a night here with work, took over 40 minutes to check in and they reported the room was not paid for even thought it had been. Other guests standing in a long queue waiting to check in.
Took them 3 attempts to gain access to my room. Finally get access and the lights aren’t working.
Dirty tissues on the floor - thought you advertised additional COVID cleaning measures?
Freezing cold room.
No apology. 1 person was covering the reception and bar with queues of guests waiting. Told there were no other rooms.
Left without any solution from the reception.

Thank you for taking the time to post a review about your experience. My apologies about the issues that you encountered during you stay.

I would like to talk to you further about this. Please could you email me on gm@hiexnorwich.co.uk.

Report response as inappropriateThank you. We appreciate your input.
This response is the subjective opinion of the management representative and not of TripAdvisor LLC
Wie-Men
Lichfield, United Kingdom
3426
Reviewed 25 August 2020 via mobile
Good for over night stay

We stayed at this Holiday Inn Express enroute to Great Yarmouth. The rooms were clean and the evening meal was pleasant. We had breakfast to go which was quick and efficient - everything had to be ordered in advance.

The hotel was COVID secure with lots of sanitisation points and social distancing markers.

Thank you for your kind review. I am happy to read that you found the rooms to be clean and that your evening meal was pleasant. I am also happy that your breakfast was quick and efficient and that you were happy with everything we have in place for social distancing and santisation.

I hope to see you again.

Report response as inappropriateThank you. We appreciate your input.
This response is the subjective opinion of the management representative and not of TripAdvisor LLC
View more reviews
PreviousNext
123…97