US$167
US$150
View Deal
Expedia.comUS$150
Delta HotelsUS$150
eDreamsUS$149
TravelocityUS$150
Booking.comUS$149
Trip.comUS$167
View all 16 deals
Prices are provided by our partners, and reflect nightly room rates, including all taxes and fees known to our partners. Please see our partners for more details.
Payments made by partners impact the order of prices displayed. Room types may vary.
chrisflyer186
Vancouver, Canada
105113

Stayed here for a few nights the past couple weeks. The front desk trio (Brad, Ashley, Alison) were all so kind and nice to me. Thanks to them now I know where to go whenever I need to stay in downtown.

Also it’s so near to the other business buildings and central station.More

Great hosting you at our hotel, we're happy to hear that everything went well. We look forward to welcoming you back to our property in the near future.

Report response as inappropriateThank you. We appreciate your input.
This response is the subjective opinion of the management representative and not of TripAdvisor LLC
See all 1,787 reviews
Payments made by partners impact the order of prices displayed. Room types may vary.
Nearby Hotels 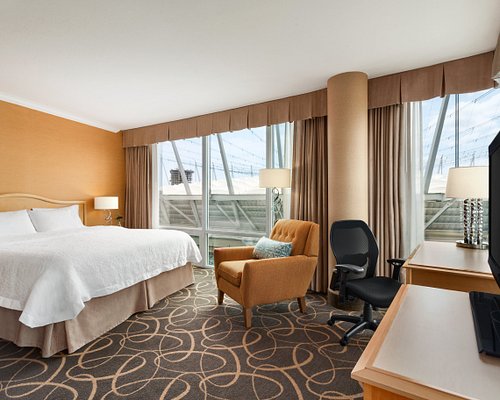 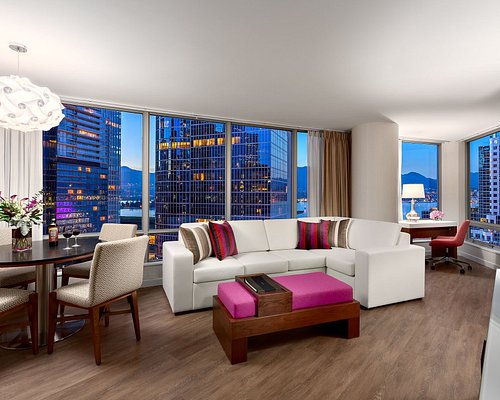 Hotels.com
View Deal
Pay up to 12X
Expedia.com
US$182
Trip.com
US$133
Booking.com
US$166
View all 15 deals from US$133
745 reviews
0.3 km from Delta Hotels by Marriott Vancouver Downtown Suites
We compared the lowest prices from 15 websites 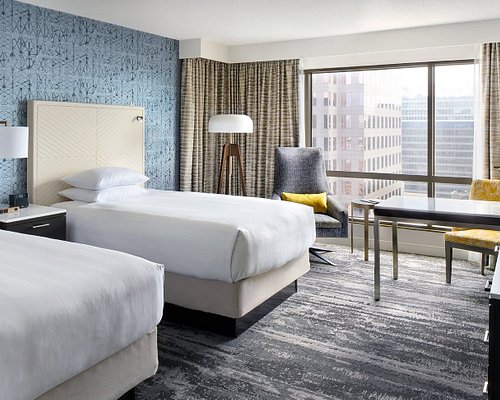 Hyatt.com
View Deal
Free cancellation
Hotels.com
US$141
Expedia.com
US$141
eDreams
US$220
View all 17 deals from US$141
4,976 reviews
0.6 km from Delta Hotels by Marriott Vancouver Downtown Suites

Hotels.com
View Deal
Free cancellation
Pay up to 12X
Booking.com
US$129
Trip.com
US$117
Snaptravel
US$135
View all 16 deals from US$117
5,742 reviews
0.8 km from Delta Hotels by Marriott Vancouver Downtown Suites

Taking safety measures
We compared the lowest prices from 16 websites
Fairmont Waterfront
US$216
Booking.com
View Deal
Free cancellation
Hotels.com
US$217
Trip.com
US$175
ZenHotels.com
US$392
View all 15 deals from US$175
4,148 reviews
0.4 km from Delta Hotels by Marriott Vancouver Downtown Suites

Hotels.com
View Deal
Free cancellation
Pay up to 12X
Expedia.com
US$183
Snaptravel
US$163
getaroom.com
US$204
View all 15 deals from US$163
4,237 reviews
0.6 km from Delta Hotels by Marriott Vancouver Downtown Suites

Official Hotel
View Deal
Reserve now, pay at stay
Snaptravel
US$156
Agoda.com
US$170
StayForLong
US$159
View all 13 deals from US$156
767 reviews
8.9 km from Delta Hotels by Marriott Vancouver Downtown Suites

After staying in a half dozen of hotels in Vancouver post-covid, someone has to rank last and in my opinion with all things considered including the price tag, unfortunately Delta takes that spot. While the rooms have been renovated recently and look decent, they are called suites but they are not spacious overall, upgrades for loyalty program elites are nothing to write home about, and it was the only hotel which did not provide any breakfast at all. I could accept a property providing less if the price tag was low, but Delta was not even the cheapest property so it’s thumbs down for me.

I booked the entry level room and received a modest one-category upgrade to a view room on the hotel’s top floor despite lots of other higher room types being available. Those other room types had a modest cash value differential so it’s not like expecting a presidential suite upgrade – they could have probably afforded to be a bit more generous given very low occupancy which many other hotels do at the moment. Our room had a view of nothing special – just buildings around.

The room was renovated recently and was fairly nice, for example the absence of carpet outside of the bedroom was a positive and the bathroom had a stand-alone shower rather than a tub which I prefer. Unlike other reports I read before, I found the room to be clean and nothing to complain about, the TV had Netflix which was a plus, and there was a convenient mini-fridge in the living room.

Toiletries were awful with the soaps that have three holes in the middle on the entire length of the soap and invariably fall apart after using them only a few times per day, and there were no extra amenities for example no bathrobe, no mouthwash, etc. They did not even have a ‘do not disturb’ sign to hang on the door – covid cutbacks taken too far.

Delta advertise themselves as having a nice restaurant, however it does not help that they closed it during covid, unlike other hotels in the city which kept it open (at least for room service). Consequently they did not offer breakfast, not even a boxed breakfast like we received at Hyatt Regency and Westin Grand, and the alternative was simply to be forced to pick the welcome points as Marriott elite guest. Let’s just say that for a long stay it would be quite modest compensation. Also I would note that this property used to have a lounge but they closed it in 2018 to replace it with two bedrooms which is possibly a sign that they were on the lookout for what to cut, even before covid.

Wifi worked great during our stay with speeds over 125 Mbps and was the best of all hotels we stayed at in Vancouver recently.

All in all while nothing was unacceptably bad at Delta, I cannot recommend this property. At first glance given that the hardware is fine and all rooms are suites, for people without elite status at any chain who want to book a suite, the subpar room upgrades and the (temporary) absence of breakfast benefit would not be an issue so such guests might find Delta to be a good fit. However even for those people, Westin Grand (which is less than a 10-minute walk away) is also a hotel where almost all rooms are suites, the rooms are more spacious, the hotel generally speaking is more luxurious, and it is in a similar price range. And if we compare with other hotel chains, Fairmont Hotel Vancouver is far more luxurious than Delta, does not upgrade to suites but the corner room upgrades result in a room as big as Delta’s suites and the price range is similar. I find no compelling reason to return to Delta in the near future so I will avoid it.

Thank you for choosing to stay at the Delta Hotels Vancouver Downtown Suites and providing your honest feedback.
Providing the highest level of hospitality is our number one priority and we sincerely apologize for falling short of meeting your expectations.

The hotel team is committed to delivering an exceptional experience and we are always brainstorming creative ways to exceed the expectations of our valued guests, such as yourself. At your convenience, please feel free to contact us through 604-689-8188 and ask to speak to a duty manager regarding to your recent stay. It would be greatly appreciated to get more details as your feedback helps us improve and better anticipate our guests needs.

Once again, thank you for taking the time to share your feedback. We appreciate you choosing to stay with us during these unusual times.

Report response as inappropriateThank you. We appreciate your input.
This response is the subjective opinion of the management representative and not of TripAdvisor LLC
Weatherfrank
Regina, Canada
8155
Reviewed 12 November 2020 via mobile
Would not stay again

I booked this hotel with very high expectations. Upon arrival we encountered a not very pleasant check in agent. I felt accosted by his personality in a sense that his tone was directed at me as to why I was staying here. I am young yes, but a young professional and shouldn't be treated any differently because of this. The rooms were nice - I did really enjoy it the TV's and beds were comfortable. Around 6am we started to hear loud bangs outside from trucks. I'm just not sure if I would stay here again or recommend it.

We apologize that you didn't receive a warm welcome when you checked in to our hotel, we always try to put our best foot forward and create a positive interaction throughout a guest's and it's unfortunate that this didn't happen. We will share your comments with our team and work harder to ensure that all of our future guests have relaxing and enjoyable stays with us. Thank you for sharing your feedback.

Report response as inappropriateThank you. We appreciate your input.
This response is the subjective opinion of the management representative and not of TripAdvisor LLC
gilksee
Vancouver, Canada
165
Reviewed 10 November 2020
Exceptional value, and great location

The staff was wonderful. Our room was very clean, with everything to make our stay relaxing, and user friendly.

I have no hesitation in recommending this hotel. The location is perfect, close to everything.

We're very pleased to hear that you had such an enjoyable stay, and we appreciate you choosing to stay with us. We look forward to welcoming you back.

Report response as inappropriateThank you. We appreciate your input.
This response is the subjective opinion of the management representative and not of TripAdvisor LLC
WhistlerLocal2
Whistler, Canada
233
Reviewed 5 November 2020 via mobile
Clean, Comfortable, Central

Had an excellent, yet short one night stay with a friend to celebrate her birthday. Though we weren’t in the hotel much our room was spotless and they had left a nice note and some treats for the birthday girl. We were on the 17th floor and had an incredible view of the water and the city to the east. Beds were super comfy. Check in and out were super easy, and the staff friendly. A great place to stay in Vancouver as it’s SO close to so many great cafes, bars, restaurants, shopping and attractions. Steps from transit too made it incredibly easy to get around. Can’t wait to go back!!

We're very pleased to hear that you had such an enjoyable stay, and we appreciate you choosing to stay with us. We look forward to welcoming you back.

Report response as inappropriateThank you. We appreciate your input.
This response is the subjective opinion of the management representative and not of TripAdvisor LLC
paoloartois
Vancouver Island, Canada
21
Reviewed 27 October 2020 via mobile
Disappointed

I visited again downtown Vancouver and I decided for the first time stayed @Delta normally I used Bonvoy and choose other chain of hotel but always Marriott.

This property sucks at customer service.
Locals are visiting and hotels are struggling yet a 1hr late check out OMG you need to beg for it. Normally as Marriott member You get some recognized for loyalty. Never staying at Delta properties.
Silver status was like nothing and I needed to pay 50cad for 2pm late check out. ON A SUNDAY like the whole city is busy c'mon Your property was empty YET my room was on 12 floor. Instead of giving the best for great reviews.
Don't let me start with coffee machine in the room like play tea set. Tiny and bad quality.

Providing the highest level of hospitality is our number one priority and we sincerely apologize for falling short of meeting your expectations.We will share your comments with the hotel team here.
Thank you for taking the time to share your feedback. We appreciate you choosing to stay with us during these unusual times.
Warm regards.

Report response as inappropriateThank you. We appreciate your input.
This response is the subjective opinion of the management representative and not of TripAdvisor LLC
View more reviews
PreviousNext
123…298