We stayed here for about a week early on our current vacation in St. Maarten. The people bend over backwards to serve their guests, and they live right on the property. If ever there's an issue (which is highly UNlikely), you can contact them easily. Your room is literally just steps from quiet & beautiful Simpson Bay beach, and the hotel itself is just minutes away from a spectrum of island restaurants in Simpson Bay. Winter weather in St. Maarten is in the 80s, with nighttime temps usually bottoming out around 74. Our favorite island for many years. We highly recommend AZURE! Tell Mike & Fawnette we sent you! Oh, the rooms -- ours had a big firm king size bed, cable TV, dependable high-speed internet, etc. We will be back!More

Show less
Room tip: All of them are fine. Some face the ocean, but it really doesn't matter since every room is just a few steps from the beach.

Thank you for the great review, it was a pleasure having you and your lovely wife! Until, the next time...

Report response as inappropriateThank you. We appreciate your input.
This response is the subjective opinion of the management representative and not of TripAdvisor LLC
See all 480 reviews
Payments made by partners impact the order of prices displayed. Room types may vary.
Nearby Hotels 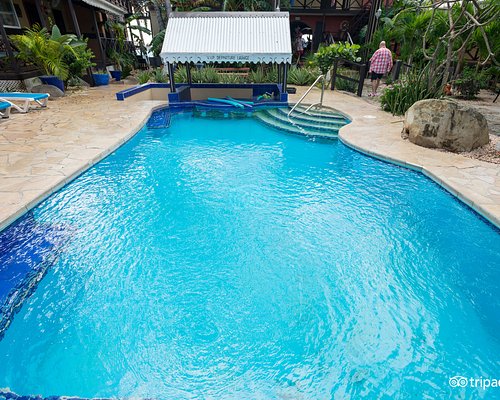 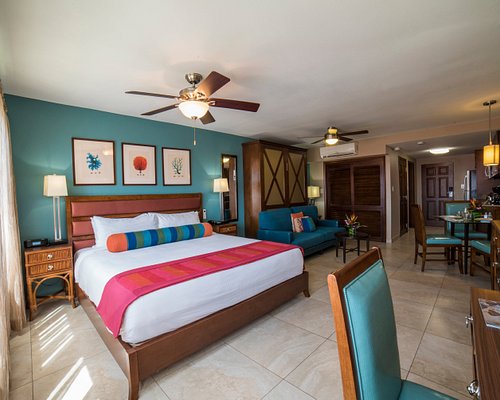 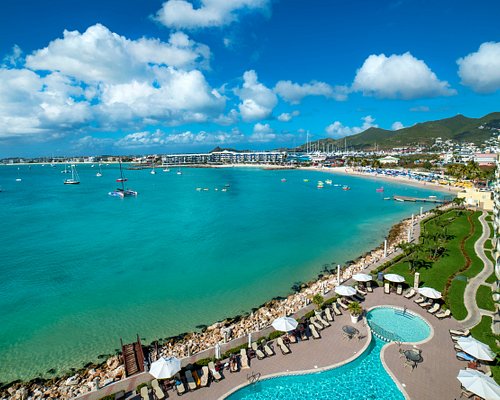 If you get a good rate, this is a more-than-acceptable beachfront motel in St. Maarten. But be aware that Simpson Bay isn't exactly paradise. It's more than a bit ramshackle and could be considered a bit gritty. Mike's place kind of fits in with this vibe, but the owner is friendly, the place is clean, it's right on the beach, and the neighborhood feels safe enough. While certainly not the best beach in the world (too much of a slope to really walk on, and the slope creates some backwash in higher surf), it's a decent beach, and Mike puts out adequate chaise loungers to relax on. The motel is probably only 30 yards from the water, and the beach is uncrowded. Rooms could be described as functional, but comfortable (you'll probably find the fridge and microwave useful, there was also a coffee maker but you need to bring your own coffee). Don't expect an actual boutique "art studio" vibe at this motel.

Rental cars are cheap on St. Maarten and you might want to rent one to get around, but be aware that there's only street parking available (not far from the motel) and traffic on the island is bad. The surrounding neighborhood is convenient to the airport and pretty central to the island, but it's not a neighborhood that could be described as "nice." There are, however, a a few decent places to eat (about 10 minutes walk)
including a beachfront bar or two if you don't have a car. Overall, though, if you're looking for anything other than budget accommodations in a modest neighborhood, you might want to consider staying elsewhere on the island is the price is acceptable to you.

Dear Dave, thank you for the nice review! I understand what you mean about the neighborhood, it is a little disheveled at the moment, but if you had seen it after Hurricane Irma, you may say that it is looking a lot better.
The recovery from the worst storm in the history of the Atlantic basin was a struggle to say the least. Simpson Bay is still comprised mostly of families that have been here for generations with some tourist accommodations mostly on the beach. The native people keep an eye on the area and keep it safe for tourists as well as locals. It is not the typical tourist area that you may find elsewhere, but that is what makes it special. Forgive me, I do not mean to sound "cheeky", but the term "motel" is not an accurate description of the Azure. The actual definition of "motel" is a roadside hotel designed primarily for motorists, typically having the rooms arranged in a low building with parking directly outside. Just want to be clear about that since we are not on the roadside and do not have a parking lot. We are in fact a licensed hotel, officially and by definition. The recovery from the storm has also set back our artistic endeavors, some paintings have to be stretched again for display and others are ruined. We have plans to get the studio back in to full swing again this year, provided we are spared by nature. All the best and thank you again!

Report response as inappropriateThank you. We appreciate your input.
This response is the subjective opinion of the management representative and not of TripAdvisor LLC
HermannWilhelm
Bergen op Zoom, The Netherlands
62
Reviewed 14 December 2018
Super stay in spacious room looking out at the beach and sea.

A very comfortable, pleasant, friendly, peaceful hotel right on the beach of Simpsonbay. What a luxury! Next time in St. Maarten we certainly will go back to the Azure Hotel. Best recommended to our friends and family.

Trip type: Travelled as a couple
Review collected in partnership with this hotel
This business uses tools provided by Tripadvisor (or one of its official Review Collection Partners) to encourage and collect guest reviews, including this one.
Ask HermannWilhelm about Azure Hotel & Art Studio
Thank HermannWilhelm

Hello Hermann, thank you for the fantastic review, it was a pleasure having you stay with us at the Azure, see you next time!

Report response as inappropriateThank you. We appreciate your input.
This response is the subjective opinion of the management representative and not of TripAdvisor LLC
Clint W
Austin, Texas
7425
Reviewed 13 December 2018
Beachfront on Simpson Bay

Funky boutique hotel on the beach. Our room (#1) was comfortable and spacious with a kitchen with mini-fridge and microwave. Though we had a courtyard room we had a view of the beach and ocean from our bed.

As of December 2018, the hotel still has some rebuilding work underway from the 2017 hurricane, though this did not disrupt our stay.

When we were there the WIFI was out of commission. The phones are VOIP, so without internet access the phones didn't work either. That made travel arrangements a little difficult and we had to rely on the 4G cell coverage which can get expensive.

The owner (Mike) lives on site. While the office was never open, the owner's place is right on the courtyard and you can just knock on the door if you need help. Mike is friendly and helpful.

The beach and ocean is the major attraction and it is right on your doorstep, with lounge chairs and umbrellas provided by the hotel. It is a short walk from several restaurants, bars, and markets, so you can get by without a car. With the difficult traffic on St Maartin, taxis seem like the better option anyway.

We would stay there again.

Dear Clint, thank you for the nice review! Our apologies for the wifi situation, it turns out the antenna was burned out, but they could not get a technician to work on the weekend. Such is life in the Caribbean. It is fixed now and even faster. We hope to see you again soon!

Report response as inappropriateThank you. We appreciate your input.
This response is the subjective opinion of the management representative and not of TripAdvisor LLC
A5046TMrichardl
1
Reviewed 9 December 2018
November 2018

Great location, right on the beach, a short ride from the airport, walking distance to restaurants etc.. Mike was very friendly and helpful. A very relaxing and quiet place to stay as there are only a few units in this hotel.

Trip type: Travelled as a couple
Review collected in partnership with this hotel
This business uses tools provided by Tripadvisor (or one of its official Review Collection Partners) to encourage and collect guest reviews, including this one.
Ask A5046TMrichardl about Azure Hotel & Art Studio
Thank A5046TMrichardl

Report response as inappropriateThank you. We appreciate your input.
This response is the subjective opinion of the management representative and not of TripAdvisor LLC
codewoz1
5
Reviewed 6 December 2018 via mobile
Good place to stay on your vacation in SXM

I stayed at Azure for around 5 weeks. Originally I booked for 3 weeks but decided to extend my stay as I was enjoying the island too much to want to leave. Mike and Fawnette are good people and good hosts. Azure is a laid back atmosphere on the beach with free beach chairs out front to enjoy the beach and ocean views.
Located in the center of Simpson Bay it has close beach walking access to a great beach bar to the west called Karakter with good food, DJs and beach chairs with wait staff. Further on in walking distance is El Zafiro with a beach bar, restaurant and beach chairs with wait staff. To the east is Kimshaw beach also a good beach with a bar and chairs.
The hotel has a grocery store with beer and liquor sale a block away and the rooms have kitchens with everything you need. Within walking distance there is good night life in the city with alot of great bars, restaraunts, clubs, shopping, strip clubs and casinos.
Simpson Bay is a great location and Azure is a nice little comfortable hotel in the middle that is safe with good rates, hosts and rooms.

Thanks Code, it was really nice having you stay with us at the Azure! All the best and we hope to see you again soon!!

Report response as inappropriateThank you. We appreciate your input.
This response is the subjective opinion of the management representative and not of TripAdvisor LLC
View more reviews
PreviousNext
1…91011…80