There's good and there's the less good, but ultimately our vacation in Martinique was fantastic, and Club Med did contribute to that. Thank you for the great vacation, and for that great room! Waterfront terrasse doesn't get better that that, it was quite literral. Good food choices, we had a mishap with that though it made me sick, I was taken seriously, albeit a little late. Overall, very recommended when visiting Martinique.More

Thank you for your review of Club Med Les Boucaniers! We appreciate your feedback tremendously and are happy to hear that you had an overall fantastic vacation in Martinique. We hope to have the opportunity to welcome you back to the resort again in the future. The Club Med Team

Report response as inappropriateThank you. We appreciate your input.
This response is the subjective opinion of the management representative and not of TripAdvisor LLC
See all 6,306 reviews
Payments made by partners impact the order of prices displayed. Room types may vary.
Nearby Hotels 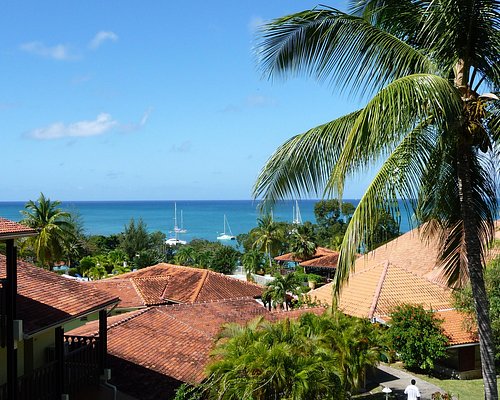 Expedia.com
View deal
Pay up to 12X
Hotels.com
US$116
Travelocity
US$116
CheapTickets
US$116
View all 12 deals from US$116
101 reviews
2.2 km from Club Med Les Boucaniers - Martinique
We compared the lowest prices from 12 websites Breakfast included
La Dunette
US$146
Booking.com
View deal
Expedia.com
US$91
FindHotel
US$91
Priceline
US$146
View all 13 deals from US$91
218 reviews
1.4 km from Club Med Les Boucaniers - Martinique
We compared the lowest prices from 13 websites 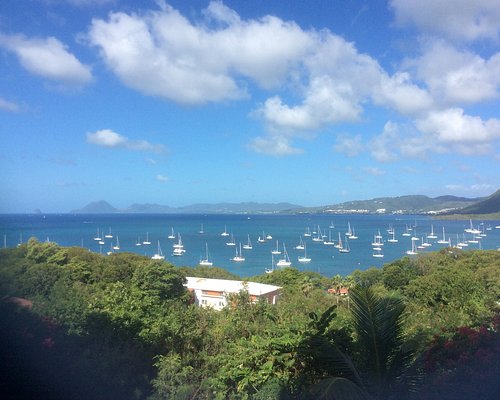 We are on a trip to Martinique. The all inclusive resort closed the bars, all activities even music and no we are confined to our rooms with closed circuit air system. We are not allowed on the beach. As proven by confinement on cruise ships this is the worst.
Please help

This was a honeymoon trip. We felt pampered and cared for from the time we stepped into the Martinique air terminal with our greeter. The accommodations, food, housekeeping were all incredible and a surprise honeymoon gift of champagne and chocolate and gift were displayed beautifully for us in our room one evening. Americans need to be mindful of the 220/110 volt issue, the gift shop did not have a transformer available for purchase but got us one within a day. Also, 5a.m. taxi did not arrive for 6a.m. checkin. No office staff, only security guard at that hour but she did call another service and we got to airport in time. Our incredible feeling of relaxation and euphoria a bit dampened at the end with stressful departure but otherwise I cannot think of a more wonderful holiday.

Review collected in partnership with Club Med
This business uses tools provided by Tripadvisor (or one of its official Review Collection Partners) to encourage and collect guest reviews, including this one.
Ask Regina J about Club Med Les Boucaniers - Martinique
Thank Regina J

Thank you for your review! We're extremely happy to hear that you had such a fabulous honeymoon at Club Med Les Boucaniers. We truly apologize that your departure did not go as planned and hope to have the opportunity to welcome you back to the resort again in the future. The Club Med Team

Report response as inappropriateThank you. We appreciate your input.
This response is the subjective opinion of the management representative and not of TripAdvisor LLC
Diverguy33
Fort Lauderdale, Florida
6647
Reviewed 3 March 2020
Very Nice Place for Vacation

My wife and I went to Club Med mainly to support my desire to dive around the island. We were totally pleased with the resort. We don't speak French, but enough Club Med personnel speak English that we had no problems, and when they did not speak English, sometimes we could communicate in Spanish or sign language. Foreign languages don't deter us!

The food was fantastic, many great varieties of fish, beef, and chicken along with wonderful salads and desserts. OMG, watch your waistline around those wonderful French pastries.

We were looking for a ground floor with 2 beds, and Club Med was able to satisfy that right before we got there. The air conditioning also blew a bit warm, but they fixed it the next day. Some aspects of the room are due for an upgrade like the bathroom and floor tiles, but other than that, we were content.

The grounds are impeccable and the beach, beautiful. Everyone rushes out on the long dock to capture a sunset before nightfall. I spent a lot of time diving under the deck and next to it for macrophotography. But I stayed away from diving outside the rope line because of boats. Also went diving at Diamond Rock--a "must do" for divers.

Transfers to and from the airport were efficient. The room was comfortable and spacious. As Floridians, we enjoyed just a 3-hour flight from Miami.

Bring Euros or get them from the ATM in Sant Ann city (which is a nice outing, especially the church). The exchange rate at the desk is very unfavorable. Most of the taxis I took accepted dollars, but Euros would be better.

Nice music and entertainment every night, but I was usually too tired after diving to stay up late.

My last recommendation has to do with the dive operation. They would not rent me tanks so that I could take pics around the shore. No night dives either, which was disappointing.

Room tip: Pay attention to the descriptions of each room so that you get what you want.
Ask Diverguy33 about Club Med Les Boucaniers - Martinique
2  Thank Diverguy33

Thank you for your review! We're incredibly happy to hear that you and your wife enjoyed your stay at Club Med Les Boucaniers. It sounds like you had a lovely time and we hope to have the opportunity to welcome you back to the resort again soon! The Club Med Team

Report response as inappropriateThank you. We appreciate your input.
This response is the subjective opinion of the management representative and not of TripAdvisor LLC
audegimonet
London, United Kingdom
2713
Reviewed 22 February 2020
Fabulous week in Martinique

The transfer from the airport took a small hour and the driver was very friendly. The new club manager greeted us on arrival, at breakfast and was very much everywhere all the time. I don’t know if she had time to sleep ! The GO who was doing the sport was totally amazing. Super funny, made us worked hard. He was also seen at apero time helping us to choose cocktails. I must say the best sport GO of all the club med I have been to. The buffet was really good and lol the food we enjoyed was well cooked and seasoned. Not sure why some people make negative comments about the beach. It is true paradise, such luxury to have a long and stunning beach a few seconds away from our accommodation. We enjoyed a backstage tour and had a lovely presentation by the costume manager Ellie, not t mention endless stories by the set designer Didier. The club was full but felt very serene and quiet. We had a few outings and found stunning Beaches around the island. We loved Martinique and love club med. we can’t wait to be back

Thank you for taking time to review your stay in Martinique. We are delighted to know that you had a fabulous week in our resort! We've passed your comment on to the GO team for their information.
We hope to welcome you again soon!

Report response as inappropriateThank you. We appreciate your input.
This response is the subjective opinion of the management representative and not of TripAdvisor LLC
michaeleK4927MP
Geneva, Switzerland
2
Reviewed 21 February 2020 via mobile
lovely place

we had a nice week here, plenty for the kids to do, food was good and there is always something going on or just relax on the beach or by the pool. Have to mention Anais was Brilliant, so friendly and helpful so big props to her.

Thank you for your feedback. We are delighted to know that you had a nice week in Les Boucaniers.
We hope to welcome you again soon in one of our resorts!

Report response as inappropriateThank you. We appreciate your input.
This response is the subjective opinion of the management representative and not of TripAdvisor LLC
View more reviews
PreviousNext
12…1051
<script type='text/javascript' crossorigin='anonymous' async onerror='__scriptLoadError(this,true);' src='ht