US$259
US$97
View deal
Free cancellation until 03/06/22
Trip.comUS$259
Hotels.comUS$152
PricelineUS$105
View all 18 deals
Payments made by partners impact the order of prices displayed. Room types may vary.
Prices are provided by our partners, and reflect nightly room rates, including all taxes and fees known to our partners. Please see our partners for more details.
KaffdeBaff
Leeds, United Kingdom
18082

The rooms are lovely in this hotel, and the beds are comfortable. The pillows are not bad either! The bathrooms are also stocked with a lot of the amenities that you need. The views over Tokyo are great too, and if you're lucky you get a view of Fuji-san in the distance!
I have a gripe, however, the carpet is covered in black hairs (head hairs), and I am blonde so they are definitely not mine. I wouldn't have noticed it otherwise but I usually do morning stretches which require me to lay on the floor, which is when I noticed it. Hopefully it's just a one off for them and they rectify during housekeeping.More 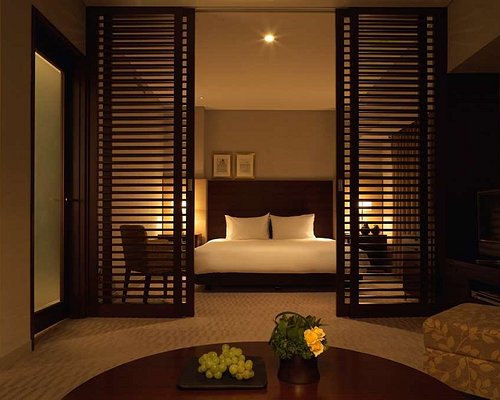 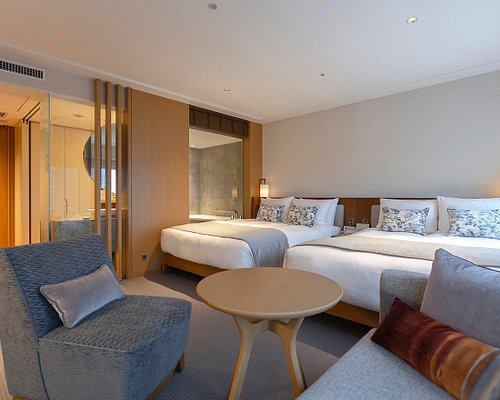 Expedia.com
View deal
Free cancellation
Reserve now, pay at stay
Priceline
US$53
FindHotel
US$42
Hurb
US$63
View all 16 deals from US$42
262 reviews
0.5 km from Keio Plaza Hotel Tokyo
We compared the lowest prices from 16 websites
Kimpton Shinjuku Tokyo
US$195

Expedia.com
View deal
Free cancellation
Pay up to 12X
Hotels.com
ZenHotels.com
US$180
getaroom.com
US$204
View all 15 deals from US$180
87 reviews
0.5 km from Keio Plaza Hotel Tokyo

Arrived here, by coach from the other side of Town - Daiba - having just heard the rumour that the England Rugby Team were also staying and they were also about to check-in. The imminent Arrival of 'Hagibis' ( a Cat 5 Typhoon) did not deter us. This was going to a momentus weekend and excitment was building.

Imagine our reaction, when, as we disembarked from our Bus, the England Team appeared carrying their Bags & leaving. This was Thursday & sure enough Saturday's match v France was cancelled, hence they left, for parts further South, where they could train etc in better weather conditions.

We were made of sterner stuff & we remained for 3 nights, until Hagibis had passed. This was my first CAT-5 Typhoon (and by coincidence, my first Earthquake, so a truely remarkable weekend) and I have to admit there must be worse places to have to hunker down during a Storm, but 3 days of not much to do but eat and drink !! Boring & really rather restricting. I am not blaming the Hotel for the weather, but they had done nothing, apparently, by way of 'prep'.

You can imagine, as the true enormity of the Loss of Life and Carnage emerged during the next few days, how we felt about our blase attitude.

The Hotel, for a 1,450 Room on 40+ Floors with all mode cons, modern Establishment performed reasonably well, if it lacked a certain something in reacting to the severity fo the Storm - chronic shoratge of chairs in Reception and Ground Floor. Huge cavernous Meeting Rooms (function rooms) remained Closed-Off. Gym remained Off-Limits. The Top-floor bar was opened a lot longer (serving excruciatingly expensive 16 oz Pints of Beer) but had insufficient Space for Rugby Fans to watch a Televised Match. There was a Rugby World Cup happening remember.

You knew you were fully Booked. You had days and days of prior Warning of the Storm's arrival and strength, yet you appeared to have No Contingency Plans.

Rooms were fine. Breakfast was fine. Gym was Closed.

In Summary - for the Business traveler on expenses and where a City-centre Location is crucial, this works. For Tourists, I did not think it value-for-money. I was only a Unit to be processed.

This review is the subjective opinion of a Tripadvisor member and not of TripAdvisor LLC.
mo71ey
123128
Reviewed 25 April 2020 via mobile
Great hotel!!

We were only meant to be here 3 nights but due to COVID 19 ended up spending 5 nights here before flying home early. It’s a fantastic hotel 5 star! Staff were all wonderful and I even got the most delicious birthday treat on arrival. The hotel was extremely clean and the staff proactive prompted you to use the hand sanitiser when re entering the hotel. Really easy to get around from here, we walked a lot but there is still plenty of public transport near by. I will stay here again and I highly recommend it!

This review is the subjective opinion of a Tripadvisor member and not of TripAdvisor LLC.
IxChel3300
Sacramento, California
103106
Reviewed 22 March 2020 via mobile
Loved it!

We sprung for a premium twin room with Executive Lounge access. The room was excellent with a good bathroom. The lounge was very nice, but I would suggest that the hotel expand its menu of evening hors d’oeuvres and mix them up a bit. What they served was ok, but not the same thing every night. The staff were all excellent and very friendly.

This review is the subjective opinion of a Tripadvisor member and not of TripAdvisor LLC.
lilyberkolu
Austin, Texas
42
Reviewed 22 March 2020 via mobile
Wonderful place to stay!

We flew into Narita airport and got a quote from a taxi for over $200 so we went to the bus and they only charge half price for kids under 12 and free for 4 yr of lap children so it was perfect. The bus came regularly and dropped us off right in front of the hotel so it was really convenient. The lobby was beautifully decorated with these hanging dolls for a festival and there was tons of hand sanitizer. We checked into two rooms and they gave the kids these toiletry bags with little slippers and toothbrushes and they were so cute! The kids loved the robes in the room and the view of the metropolitan building. The rooms were big and didn’t feel like other hotels we stayed in Shinjuku. Great location as it was close to the shinjuku station and we had a great time finding the udon restaurants at 8 in the morning. We didn’t eat at the restaurants in the hotel but they looked really nice. I recommend the updated rooms.

This review is the subjective opinion of a Tripadvisor member and not of TripAdvisor LLC.
kiwifi2015
Auckland, New Zealand
10567
Reviewed 16 March 2020
Very nice, very big hotel

We stayed for a couple of nights and were very happy with our room - not super luxurious but had everything we needed and was clean and comfortable. The location is excellent and we had a surprisingly good brunch in one of the hotel restaurants. One issue we had was that on the Saturday evening we were keen to have a drink in the hotel before going out to dinner but every single bar was either full (!!) and not allowing anyone else in or had not yet opened and we were gobsmacked that we couldn't have a drink at any bar in the hotel before we went out to dinner! We eventually had to wait quite some time but managed to get into the smoking area of the bar on one of the top floors and the view was spectacular!! We were extremely lucky because only one person smoked more than one cigarette and we weren't too close. They need to halve the size of the smoking area and open it up to non-smokers because the smoking area was almost empty and the non-smoking area was packed full - not a sensible use of space.