US$175
US$161
View deal
Booking.comUS$175
Hotels.comUS$161
PricelineUS$175
eDreamsUS$175
TravelocityUS$161
Agoda.comUS$175
View all 14 deals
Prices are provided by our partners, and reflect nightly room rates, including all taxes and fees known to our partners. Please see our partners for more details.
Payments made by partners impact the order of prices displayed. Room types may vary.
Jack T
Maarssen, The Netherlands
2517

A very decent place, ideal to use as a hub to explore Marie-Galante, certainly value for money. The breakfast is nice, with a personal touch, and during your stay at the resort you will always have this beautiful view over the sea, which is only a few metres away. If the pool would not be there, the waves would be at your doorstep. We very much enjoyed our stay at the Coco Beach Resort. Thanks to the hospitality, helpfulness, and service with a big smile. Any issues we had were properly addressed, language barrier or not. In preparation for the high season there is still some work in progress but staff was working hard to get things sorted (e.g. wifi in the room, make more sockets available in the room).More

Show less
See all 168 reviews
Payments made by partners impact the order of prices displayed. Room types may vary.
Nearby Hotels 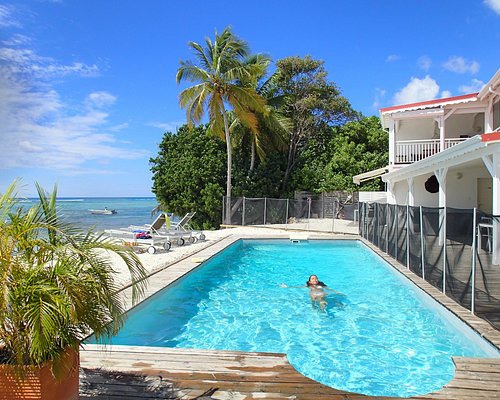 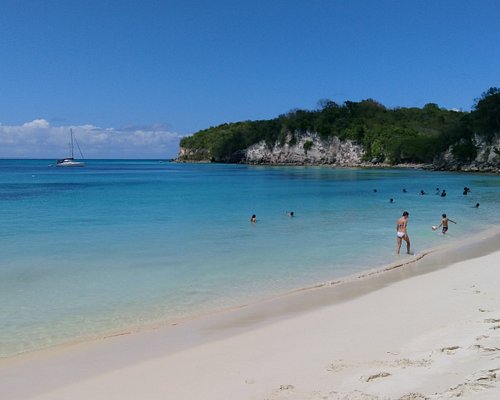 El Rancho
US$72
Tripadvisor
View deal
Priceline
Booking.com
US$72
Agoda.com
US$72
View all 5 deals from US$72
92 reviews
3.4 km from Coco Beach Resort
We compared the lowest prices from 5 websites 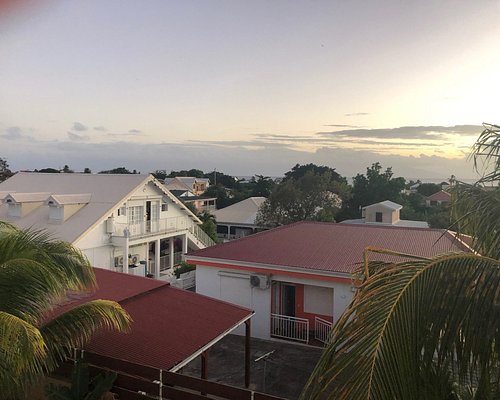 A quiet place with a wonderful view. An excellent swimming pool and jacuzzi. Beautiful large rooms an bathrooms . It seems to stay on a boat because it is straight over the see. If you consider that the hurricane Maria passed only three months before our stay, they have done miracles ! Our congratulations to the property

This review is the subjective opinion of a TripAdvisor member and not of TripAdvisor LLC
GillThorpe
Hadleigh, United Kingdom
2715
Reviewed 24 February 2016 via mobile
Looks like paradise but beware

The views from the hotel terrace are just as shown on the hotel website. It really is that beautiful but all is not as it seems.
You really do need a car but don't let the hotel get you one. The one we had was a wreck.
You need to be quick for breakfast as what is on offer goes quickly.
We had only a hand held shower in our bathroom and no hair dryer.
No tea/coffee facilities in room and nothing available in the hotel apart from at breakfast time.
Hotel effectively abandoned for 12 hours between 7 and 7.
Security poor. Our room was broken into during a 2 hour period when we went for dinner. Many items stolen.
An information sheet left in the room advising of high crime in the areas would have been useful.
Hotel is on a very thin piece of land between coast road and sea, so lots of road noise all night and also it was easy to see from a drive by if anyone was in the hotel.

Dear costumer, I am really sorry of what happened to you but the problem is that you didn't close your electrical rolling shutter when you left your room. For the noise of the street it is the same, there is also a roling shutter to close to not have the car noise. In Marie-Galante there is no criminality except during the hollydays when we have people comming from guadeloupe or far away. There is no high criminality area in Marie-Galante. In fact you did not closed safely your room because you feel yourself in high confidence in a safe island. Now following this event, we have installed a video surveillance system and we add an extra safety manual system to lock the bay windows in case the guest forgot to shut the electrical rolling shutter. Don't forget you also have a safe in your room. We are still waiting for the list by e-mail of what have been stolen because we have an insurance for that kind of event to reimburse you. For the cars we have on site, they are not new cars and it's a choice, but they are at a reasonable price with air conditioning, category C, and with a rebate when you are renting a room of the hotel (usualy one day for free). Best regards and I hope you will have next time a great time in Marie-Galante

Report response as inappropriateThank you. We appreciate your input.
This response is the subjective opinion of the management representative and not of TripAdvisor LLC
aleb109
Milan, Italy
11539
Reviewed 26 April 2014
awesome with private caribbean beach

i ve been here with my girlfriend in april 14.the hotel is amazing, right on the beach with a private one.room,patio with small pool , amaca, and sea at 2 meters from the door .truly amazing . i d like to come again soon

This review is the subjective opinion of an individual traveller and not of TripAdvisor LLC nor of its partners.
Michèle D
Loire-Atlantique, France
4422
Reviewed 17 February 2014
Definitely not a 3 star hotel !

Arriving at the hotel we were asked to pay in full the room booked for 4 nights on internet and for which a down-payment had already been cashed. We discovered later, from people in the village, many guests used to leave before the end of their stay ! Let me tell you why.
The room, furnished with twin beds as requested, was spacious and clean and looked out over the pool and sea as advertised, but no complimentary shower gel or shampoo, just two miniature bars of soap (one already cracked into several pieces in its wrapping). We were told that this was normal and she told us where to buy whatever we needed. There is also no plug in the bathroom and, of course, no hairdryer.
There was, however, a refrigerator in the room (empty) and a can of mosquito repellent. She left us to unpack, unfortunately forgetting as she did so to leave us the door key. She also forgot, as we later found out, to let us know that the hotel offered its clients on their arrival, a complimentary pre-dinner drink.
Breakfast is served at 7h30 am and, having read the reviews prior to our arrival, we made every effort to arrive as early as possible to enjoy the fresh fruit available to early risers. Breakfast is self service -- you take a tray and carry it out to the table in front of your room – but firstly, the trays are enormous and heavy, the breakfast plates are huge dinner plates (no hot meal provided)and also weigh as much as the tray, the glasses for juice are also huge and heavy; there is no place to set down your tray, before proceeding across from the table (no buffet arrangement) to pour yourself a cup of coffee. When my husband suggested to the lady member of staff who was busy doing very little but at least present, that a table might in future be a good idea, he was told that the room was too small - he pointed out the space by the entrance door that was more than adequate but the subject was obviously of little interest. Those suffering from arthritis are warned !
It is hotel policy that bed sheets are changed every 3 days. There is, in fact, a notice pinned next to the reception to this effect, but we never imagined that this also meant that the room was not cleaned for the duration.
Having booked for 4 nights we found it ridiculous to have our room serviced one day before check out so my husband requested, on the afternoon of the third day, claiming that the hotel was on its way to losing its third star, that we needed, at least, the tiny waste bin in the bathroom (no other wastepaper basket available) emptied and the sheets changed. A cleaner arrived soon afterwards and did the bare necessities but our towels were never changed and the shower stall and toilet never cleaned.
When we left at 9 am, nobody appeared at reception for checkout. Why should anyone? Apparently, the hotel is always full whatever the season and having received the full amount upon arrival, why bother to see the client off when he leaves?

For what it’s worth we came across another 3 star hotel within 20 minutes drive and which, although not directly on the beach, afforded a 180° view of the sea, had a “proper” restaurant (not a kiosk on the beach), bar and seating area, reception desk fully staffed and a swimming pool whose liner was firmly in place. More of a 3 star "resort" than Coco Beach !

This review is the subjective opinion of a TripAdvisor member and not of TripAdvisor LLC
SaraetAlex
Le Gosier, Guadeloupe
23
Reviewed 7 July 2013
Very satisfying stay!

After a misunderstanding with another hotel in Marie Galante, which left my boyfriend and I "homeless" in the very rainy harbor in Grand Bourg, we were rather desperate and called the first the best hotel on the map. We cot a women, and she was very helpful, picking us up at the harbor and installed us at the hotel. The room was beautiful, very comfortable bed with an amazing view. The surrounding are so peaceful, and you can really take time to relax. We haven't understood that the breakfast is served from 7.30-9.30 (basically like anywhere else), but when we arrived around 10 o'clock, we met a very understand staff who still let us get some breakfast despite of our mistake. The breakfast is included and is fine. Includes everything a European breakfast table should. In the evening we have been eating in the restaurant across the road, not the first but the second one when you come from the hotel. And this restaurant we can really recommend! The owner is extremely kind, the food is amazing and the atmosphere is great as well.
All in all, we spent two beautiful days there, in nice friendly surroundings - but don't expect 5 stars service, where the staff is around you all the time. But for us, that have a certain charm, and the few people that are there during the day are so friendly!

Room tip: We stayed in a room right next to the jacuzzi, from where we had a beautiful, but I guess every room have basically the same.
Ask SaraetAlex about Coco Beach Resort
2  Thank SaraetAlex