US$341
View deal
Expedia.comUS$341
CheapTicketsUS$341
FindHotelUS$340
Orbitz.comUS$341
TravelocityUS$341
TripadvisorUS$341
View all 13 deals
Prices are provided by our partners, and reflect nightly room rates, including all taxes and fees known to our partners. Please see our partners for more details.
Payments made by partners impact the order of prices displayed. Room types may vary.
ShirlyMenashe
Rovaniemi, Finland
1

We stayed for one night in a ice igloo. We pre ordered the romantic package which includes wine, cheese plate and romantic decoration. We paid 75€ for it. We got plastic roses for decoration and electric candles which didn't even work and was full of dust... Regarding the cheese plate- Image will speak for it self !
I would have never paid this price for what we got.

However sauna& jaccuzzi were amazing !More

Thank you for taking the time to give us a review! We are happy to hear you enjoyed the sauna and jacuzzi. We have decided to choose reusable materials in our romantic package. We are sorry to hear that some of the candles didin't work. We would have replaced them if we knew. Of course the room should be spotless and we will review this with the staff. Thank you for your feedback!

Report response as inappropriateThank you. We appreciate your input.
This response is the subjective opinion of the management representative and not of TripAdvisor LLC
See all 470 reviews
Payments made by partners impact the order of prices displayed. Room types may vary.
Nearby Hotels 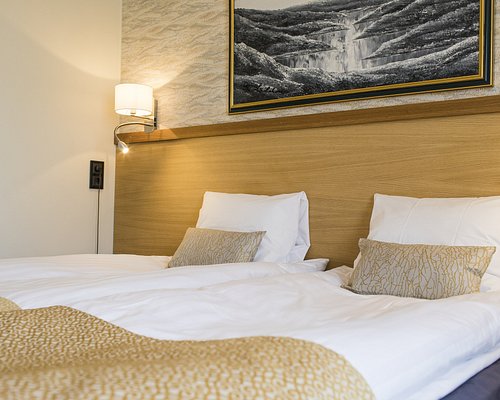 Hotels.com
View deal
Free cancellation
Reserve now, pay at stay
Booking.com
US$46
Priceline
US$96
eDreams
US$96
View all 12 deals from US$46
259 reviews
22.2 km from Arctic SnowHotel & Glass Igloos
We compared the lowest prices from 12 websites 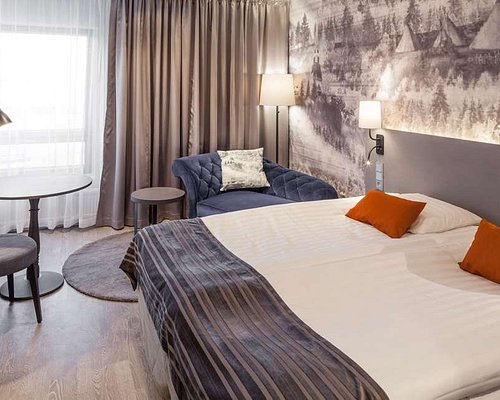 Breakfast included
Scandic Rovaniemi City
US$148
Booking.com
View deal
Hotels.com
US$148
Agoda.com
US$132
Expedia.com
US$148
View all 18 deals from US$132
309 reviews
22.7 km from Arctic SnowHotel & Glass Igloos
We compared the lowest prices from 18 websites

Hotels.com
View deal
Free cancellation
Pay up to 12X
Booking.com
US$142
Expedia.com
US$142
Priceline
US$142
View all 18 deals from US$141
759 reviews
22.9 km from Arctic SnowHotel & Glass Igloos
We compared the lowest prices from 18 websites
Breakfast included
Original Sokos Hotel Vaakuna,Rovaniemi
US$157

We slept one night in the ice hotel and one night in the glass igloos. The staff was really friendly and helpful. We were an hour late for our diner, but arrangements were made so that we made it on time for our activity in the evening. We ate one time in the ice restaurant and one time in the Kota restaurant, the restaurants were swapped when the staff realized that it would be easier for us the other way, which was very nice that they really thought about what was best for us and made the suggestion. The ice hotel was really nice (a bit cold, but what else would you expect :) ) and we were offered the glass igloo for both nice if we the ice hotel would be too cold for us in the night so that we could move inside. We were first assigned a glass igloo, but the water turned out to not be working and we were very quickly moved to another one and helped with moving our stuff. The food at breakfast was really nice and tasteful. I would recommend going here and sleeping one night in the ice hotel (just to say that you have done it) and one (or more) night(s) at the glass igloos

Firstly thank you for your generous review! We are happy to hear your stay with us was successful and you found the staff helpful both before and during your stay. Making the stay as relaxing and comfortable as possible is our goal. We hope to see you again in the future!

Report response as inappropriateThank you. We appreciate your input.
This response is the subjective opinion of the management representative and not of TripAdvisor LLC
767ulla
Kuopio, Finland
7126
Reviewed 20 December 2020 via mobile
Wonderful!!

We spent a night in snowhotel suite and it was so wonderful,amazing experience!! The whole building with its restaurant, churche, icebar and rooms is so special that it is hard to describe it,you just have to try it yourself! We got a warm sleepingbag and it was good sleep, not cold at all. We can warmly recommend to sleep in this snowhotel!!!

Thank you for your review! We are happy to hear you enjoyed your stay and the full experience was something special. Hope to meet you again! All the best to you!

Report response as inappropriateThank you. We appreciate your input.
This response is the subjective opinion of the management representative and not of TripAdvisor LLC
MicceI
Vaasa, Finland
81
Reviewed 2 November 2020 via mobile
Expected more

Stayed one night in the igloo with high expectations. We didn’t get any warm water the evening we arrived, nor the next morning. It was also a bit cold in the igloo and the minibar fridge did not work. The service in the reception as well as the breakfast was ok. Maybe this place is better in the winter

Hey! Thank you for taking the time to give us an review. We reviewed your stay with the staff and done repairs in the piping of the Igloos. Hopefully you voiced these with the staff so we had the opportunity to change the igloo. I hope you can give us another change one day!

Report response as inappropriateThank you. We appreciate your input.
This response is the subjective opinion of the management representative and not of TripAdvisor LLC
Anita C
Buckinghamshire, United Kingdom
75
Reviewed 1 November 2020
Fantastic experience

Lovely, well thought out 'Igloos' for a one-off experience. Compact, clean with all relevant facilities for a brief but enjoyable, different stay. Unfortunately did not see the Northern Lights but that is a chance everyone takes when visiting. Still had a great time.

Thank you for your stay with us and reviewing our hotel! We are glad to hear you found your stay in the Glass Igloo comfortable and enjoyable.

Report response as inappropriateThank you. We appreciate your input.
This response is the subjective opinion of the management representative and not of TripAdvisor LLC
x_janeybaby_x
dundee, scotland
3
Reviewed 14 September 2020
Terrible service

Booked a night in this hotel thinking it was in Iceland near revajick airport however it's in Finland. There are no direct flights from Scotland to finland, would have to get 3 flights to get there, taking 19 hours on a plane, longer than going to America! My 8 year old would not endure this. Emailed to cancel as they took £110 out my account, they say they cannot cancel only move my booking to next year. I doubt there will be direct flights by then. Shocking customer service given current covid climate. I am a single mum and nurse, cannot afford to waste £110. Very disappointed

Thank you for taking the time to give us a review. As discussed by private message, we had a special promotion of non-refundable accommodation of 149€ (normally 399€). Regardless of the cancellation policy we were able to change within the same year but not for following year. We hope we are able to meet you here in Finland some day!

Report response as inappropriateThank you. We appreciate your input.
This response is the subjective opinion of the management representative and not of TripAdvisor LLC
View more reviews
PreviousNext
12…79