Massive potential for improvement - Review of Relais I Piastroni

Relais I Piastroni
Lowest prices for your stay
US$116
US$90
View deal
SAVE US$26
Free cancellation until 13/05/21
Reserve now, pay at stay

Orbitz.com
Booking.comUS$116
Expedia.comUS$90
View all 13 deals
Prices are provided by our partners, and reflect nightly room rates, including all taxes and fees known to our partners. Please see our partners for more details.
Payments made by partners impact the order of prices displayed. Room types may vary.
gbemia2019
1

I’ll start with the pros

The spa was very clean and spacious. We booked the 50min body massage each. The staff and service were excellent.

Cons:
We booked the restaurant for dinner. Unfortunately the service left a lot to be desired. Some items from the menu had run out and there was a very non Chalant attitude from the staff in response to this. I’m currently pregnant hence the lack of choice further excavated this. (E,g, I specifically requested for well done steak but was presented with a medium rare finish)
There was one particular staff, elderly looking with shoulder length hair who was extremely rude. I believe he is management. Appalling job of managing a busy restaurant. There was a tall looking waiter, who was very friendly

The rooms, though nice, could have had a telephone for room service, tea/coffee making facilities and more varied channel choices. Given that this hotel attracts tourists from all over Europe, a wider choice of channels wouldn’t have gone amiss. Only Italian channels were available.

Overall, an ok weekend stay with massive potential for improvementMore

Show less
See all 354 reviews
Payments made by partners impact the order of prices displayed. Room types may vary.
Nearby Hotels 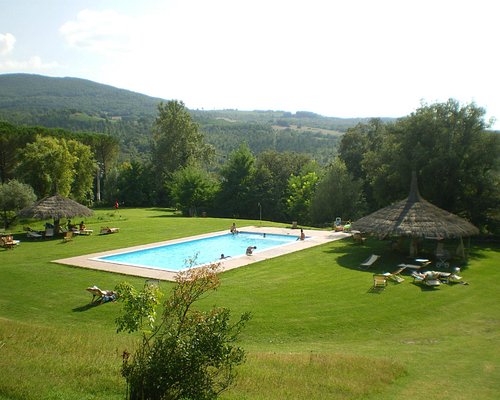 Top Rated
Breakfast included
Villetta di Monterufoli
US$120
Tripadvisor
View deal
Reserve now, pay at stay
Hotels.com
Booking.com
US$120
eDreams
US$120
View all 12 deals from US$120
145 reviews
5.6 km from Relais I Piastroni
We compared the lowest prices from 12 websites Can I start by saying that this place should be fabulous, but sadly ,it’s not. Location is fantastic and the facilities are good,BUT, the rules and regulations are ridiculous. Hard and fast rules that ridiculous swim caps, handed to you on arrival and then charged for them at the end, are worn by all in the pool. Even my hubby who has more hair on his body than he has on his head. “Quiet “ time most of the afternoon when the pools were shut and no noise was to be made, bins to be emptied off site in the village dumpster......crazy. The first room we were shown to was musty and smelled of gas and mould with no windows to ventilate and set off my asthma. Second room was acceptable but still felt run down and deserted. The whole place had an eerie empty feel to it and visitors were few and far between. We only slept and ate breakfast every day and took off out to normality,, only returning to sleep. Final straw was being pulled up in the dining room by a very loud waitress for not paying for breakfast,, which we had as it was included in our booking. Vey humiliating. It’s such a shame about this place as it should be fantastic, but it’s just not. We won’t return.

Dear Mrs Gillynev
First of all we would like to thank you for making a very long trip from Regno Unito to Tuscany and we are very happy that it was worth it, even though seems that not everything went smoothly in your visit to our Hotel.
We regret to read that the level of our service provided did not meet your expectations, please rest assured that your comments have been shared with the whole team in an effort to improve our commitment to make every Guest feeling at home with us. We wish to thank you once again for taking your time to provide us your valuable feedback, we do appreciate that. Listening to our Guests it is fundamental for us.
We do hope that this experience will not prevent you from coming back to the Relais I Piastroni and to give us another opportunity to provide you the expected service.
Best Regards
The Management Relais I Piastroni Hotel Di Nardo Group

Report response as inappropriateThank you. We appreciate your input.
This response is the subjective opinion of the management representative and not of TripAdvisor LLC
hugfrihacks
Eindhoven, The Netherlands
1
Reviewed 6 October 2018 via mobile
Absolutely not to recommend

We went there in order to relax a bit at the beginning of autumn. But neither the warm,thermal swimming pool worked nor there was an appropriate heating in the accommodation for the already chilly temperatures of this time of year. Besides this there was almost no staff in the whole complex. It couldn't harm employ some more personal for the guest's sake.
Another disadvantage of this spot is that there is almost no network..on one hand it's good to be a bit out of reach etc. but if you really need to call sb via phone etc. ...you're more than lost...the wifi itself doesn't work very well either. At least, to note sth positive, it was tranquil...I could go on writing about things that should be improved here but I'm not in the mood to write a novel. In total, a pretty little sum of money that could have spent way better than here.

This review is the subjective opinion of a TripAdvisor member and not of TripAdvisor LLC
Cnote7
32
Reviewed 2 September 2018
Poor management and not worth the stay!

Simply put it’s not worth the stay! The pool is nice and that’s about it. We stayed in one of the apartments and had to deal with ants in the kitchen and family room where my child was sleeping. Complained about it to the front desk and they gave me a can of outdoor insect repellent. The owner of this place is a grumpy old man that argues with the guests over the many rules enforced at this “spa” retreat. Better retreats available in The Tuscan region.

This review is the subjective opinion of a TripAdvisor member and not of TripAdvisor LLC
Tessa V
13
Reviewed 28 July 2018 via mobile
Not worth it.

The rooms and the hotel itself are beautiful. But the rooms are small. We visited with three grownups. They put us in a two person room with one two person bed. Claiming they thought one of us was a child. They added a small, unstable cot with a 5 cm mattress. When we complaint the staff didn't care very must. They mostly ignored us afterwards. The food in the restaurant was bad. I have no other words for it. Not worth it.

This review is the subjective opinion of a TripAdvisor member and not of TripAdvisor LLC
FurioRozza
Belluno, Italy
6045
Reviewed 11 August 2017 via mobile
Great resort, big investment, tighter management should be there

Amazing investment done by the shareholding, you can see that from any side of the village, nice location, the whole tip of a hill, swimming pool, SPA with anything you may wish to relax, but, there is a but, a real control of what is happening is not there. Service at breakfasts, maintenance of the rooms. With this improved, everything would be perfect!