US$68
US$59
View deal
SAVE US$9
Expedia.comUS$65
FindHotelUS$64
eDreamsUS$68
View all 16 deals
Prices are provided by our partners, and reflect nightly room rates, including all taxes and fees known to our partners. Please see our partners for more details.
Payments made by partners impact the order of prices displayed. Room types may vary.
Dainiusch
London, United Kingdom
162

Trip type: Travelled with family
See all 120 reviews
Payments made by partners impact the order of prices displayed. Room types may vary.
Nearby Hotels

Breakfast included
Poli Hotel
US$105
Booking.com
View deal
Reserve now, pay at stay
Hotels.com
US$106
Official Website
US$84
Trip.com
US$108
View all 18 deals from US$84
357 reviews
0.8 km from AS Hotel Sempione Fiera

Hotel 2C
US$82
US$75
Tripadvisor
View deal
Pay up to 12X
Travelocity
eDreams
Priceline
US$82
View all 16 deals from US$75
112 reviews
2.8 km from AS Hotel Sempione Fiera
We compared the lowest prices from 16 websites 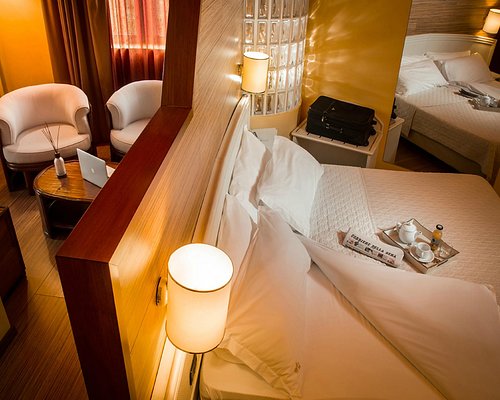 Welcome Hotel
US$90
US$59
Tripadvisor
View deal
Free cancellation
Reserve now, pay at stay
Hotels.com
Booking.com
US$59
StayForLong
US$90
View all 15 deals from US$59
332 reviews
2.9 km from AS Hotel Sempione Fiera

The room has lots of insects. They gave us the ground flour room. And there is a garden door which has no seperator under the door. You can see the insects are coming. The staff is gonna trying to be helpfull but they even cant buy the medicine sprey for insects. And my wife bitten several times by insects. This Hotel is not recommended. Just go find another one.

This review is the subjective opinion of a TripAdvisor member and not of TripAdvisor LLC
LightPacker259814
3
Reviewed 2 June 2019
Does the hotel have a bar?

Stayed at this hotel as a coach party,really pleased with our rooms, best on the tour,food was average but OK, I question whether there is a bar as there was a distinct lack of alcohol choice, several bottles were clearly display only as they were empty. One choice of Gin and not a popular one, no tonic water only cloudy lemonade, ran out after 3 drinks, vodka also ran out, several other spirits/ liqueurs were empty also. As we were a bit frustrated the barman went and got Another who was far from friendly asking us to choose what they had in stock, that was night one....night 2 we arrived off our excursion and went to the bar at around 16.50 rang the bar bell receptionist came out waving arms signifying not open. We went over the road to Supermarket and got Vodka, tonic, beers and wine which we drank in the bar. After getting ready for evening meal we came down to an open bar but nothing had been replenished, had beers with our meal and went upstairs to bring our supplies down. We asked for glasses which were given but on the stroke of 10pm had to decant in to plastic cups....so they could wash up! This marred our experience of our overall stay

it's a pleasure reading your review, thank you.

You appreciated all our services and we are so happy.

Come back soon to visit us.

Report response as inappropriateThank you. We appreciate your input.
This response is the subjective opinion of the management representative and not of TripAdvisor LLC
Derya G
4
Reviewed 15 May 2019 via mobile
Great value for money

Friendly staff , they upgraded all 5 of us to their " business rooms" . These rooms were above our expectations; big , luxuries and with jakuzi . Thank you Kathie .

To avoid Milano traffic we took the train from a near by station - took us 45min to get there .

thank you so much for your kina review.

Our goal is make our Guests' stay great.

Come back soon, you will be always welcome.

Report response as inappropriateThank you. We appreciate your input.
This response is the subjective opinion of the management representative and not of TripAdvisor LLC
juancaho
1
Reviewed 10 April 2019
Rooms are too old/its not like what you expect from a 4 Star Hotel

The rooms seem like they´re 30 years old, Pictures do not resemble the reality also the hairdryer wasn`t working, found old socks under the bed. Breakfast was ok. Not what I expect from a 4 Star Hotel

Thank you anyway to spending time to write this review.
Our picture are absolutely real. What did you find different? I would like to understand.
Please write us an-mail and I will check personally.

Our hotel is not new but I’m sure that we do our best to satisfy our Guest’s needs, but if don’t complain about hairdryer at the moment, we can’t do nothing now.

If you decide to give us another chance we will show you.

Report response as inappropriateThank you. We appreciate your input.
This response is the subjective opinion of the management representative and not of TripAdvisor LLC
View more reviews
PreviousNext
123…20