We really enjoyed our stay at the Palm Court. I only stayed there 1 night as we decided to extend our vacation. It is small, charming, affordable clean room. Short walk to the beach, Orient Point, which is just gorgeous. The only downside it isn't directly on the beach. But I believe you could stay on the beach without paying for a beach chair...The staff is friendly and helpful. They will bring up wine if needed. The room had a kitchenette with microwave. There is a small community within walking distance of restaurants, stores, grocery etc. I would def come back if looking for a good value.

See all 349 reviews
Payments made by partners impact the order of prices displayed. Room types may vary.
Nearby Hotels 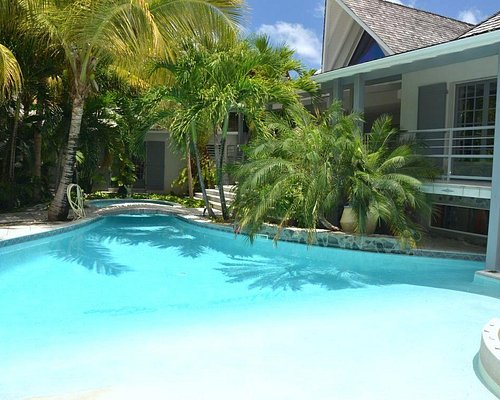 All Inclusive
Esmeralda Resort
US$236
Booking.com
View deal
Free cancellation
Expedia.com
US$236
Trip.com
US$180
Priceline
US$236
View all 17 deals from US$180
506 reviews
0.3 km from Palm Court Hotel
We compared the lowest prices from 17 websites
Breakfast included
Hotel La Plantation
US$204

In May we returned for the third time to Palm court and it was just as great as the first two times. It’s more a boutique hotel with large clean rooms small kitchenette. The beds are comfortable and a/c is perfect . The facilities have a pool, and outdoor eating area where you can have made to order eggs and continental breakfast. It is quiet and quaint and beautiful. The staff is wonderful and friendly. It’s in a gated community and truly very safe. A 1 minute walk leads you to restaurants and bars as well as a made to order pizza place. There is a large convinient store where you can buy fresh baguettes, cheese wine and most foods. There are bars along the beach as well and you can stroll each night looking for a new one. The beach is perfect. Palm court offers chairs and umbrellas at beach towels in the best part of the beach attached to a wonderful restaurant that serves good food and great wine. A 2minute drive will take you to a large grocery store and several restaurants and a gym. I have nothing but amazing things to say about one of my favourite places in St. Maarten. A car is a must and you can see everything you need in a week. Talk to the Hotel staff and they will tell you little hidden gems throughout the island. I would not bring smaller children s they may get bored but we leave the kids at home and enjoy 10 days of bliss. It’s well worth it. We will definaltey go back and stay at Palm Court every chance we get.

This review is the subjective opinion of a TripAdvisor member and not of TripAdvisor LLC
Travel_Enthusiast16
Toronto, Canada
135
Reviewed 10 September 2017
Very relaxing and lovely stay!

I had a very good experience at the Palm Court Hotel during my stay on the island. The hotel is very clean and comfortable. The staff are very lovely, kind, and helpful. I very much enjoyed the complimentary breakfast that I found to be fresh, filling and delicious! Also, the rooms are spacious, clean and relaxing.

The location is 5 minutes to the beach which is convenient and close by to local grocery stores and restaurants that are also walking distance. Everything you need is in the proximity! I would definitely come back to this incredible spot. I would definitely recommend this location if you are looking to relax and get away from the hustle and bustle. This place is definitely good for those who are looking to escape and want away from busy entertainment.

Lastly, my heart goes out to the all the people on the island for the hurricane has left such a horrible impact. The people are so kind and strong. Sending out my love and prayers!

This review is the subjective opinion of a TripAdvisor member and not of TripAdvisor LLC
Mark W
Jensen Beach, Florida
117
Reviewed 31 July 2017
Home away from Home

We stay at the Palm Court one to two times a year on St. Martin. We feel safe, secure, and pampered every time we go. The hotel is always clean, the food is always good, and Anne the manager always creates a wonderful atmosphere for her guests with the employees that she manages. YOU WILL NOT GO WRONG HERE!!

Trip type: Travelled as a couple
Review collected in partnership with this hotel
This business uses tools provided by Tripadvisor (or one of its official Review Collection Partners) to encourage and collect guest reviews, including this one.
Ask Mark W about Palm Court Hotel
2  Thank Mark W

We recently spent a night a Palm Court and it was lovely. The room was clean and nicely appointed with a large shower and a nice galley kitchenette. The pool is a great addition, reception area and staff are very accommodating, the grounds are comfortable and there is gated parking. There is a lovely continental breakfast included. We went to the beach after checking out but they were kind enough to let us take a quick shower and change in the library (another great addition). We will definitely stay here in the future for a longer time.

This review is the subjective opinion of a TripAdvisor member and not of TripAdvisor LLC
Larrabee
Toronto, Canada
48155
Reviewed 7 July 2017
Awesome Value Hotel in Off season