Shelby L wrote a review Nov 2021
Buena Vista, Colorado141 contributions65 helpful votes
Getting there
Getting there…

This was our second cruise on a Royal Caribbean ship, our first being a honeymoon cruise on the Harmony of the Seas four years ago. We had such a wonderful time that we wanted to share the experience with our family so this time we brought all of our adult kids and their significant others. Overall it was an excellent week.

The cruise line took numerous precautions due to the pandemic and made us feel at least as safe as when we are in our local environments. Vaccines were required for all eligible passengers and crew, care was taken to minimize close gathering, masks were enforced while in doors in public spaces unless one was eating or drinking, and hand sanitizer stations were everywhere. I was particularly impressed with how the crew was able to handle gently reminding passengers to mask up without being confrontational. Further, we were sailing at reduced capacity which also made the boat seem less congested.

Our cabin was a balcony stateroom and was well designed and comfortable. A few more electrical outlets would have been nice, but this it always the case on cruise ships. We were in 7166 near the bow elevator lobby and it was very convenient.

All of the dining options we tried were very good and the service was excellent. The entertainment options were also a few rungs above what we have seen on other cruise lines.

The instant messaging function on the Royal Caribbean app was a very convenient feature, though I do not think RC should charge extra for it if one is already paying for their abysmal internet service.

A few less than positive observations:

The crew is largely comprised of people for whom English is not their first language. The heavy accents were often difficult to understand and this was further exacerbated by the muffling effect of the masks. I do not mean to disparage. Their English was certainly better than my command of any other language, however it did make communication a challenge. We also found that the public address volume was so loud that the voice transmission was often over-modulated so that it could not be understood. I was prepared to chock this up to my 60 year old ears until several of the younger family members mentioned the same issue.

Our largest complaint was in the shore excursions. If you do not book through the cruise line you run the risk of being marooned if your excursion has a problem that causes you to return late. This being the case, we booked everything through the cruise line. One outing on St. Thomas was cancelled. We were able to find another excursion but most of the more desirable ones had already sold out. Then the same thing happened twice for our excursion on St. Maarten. Our first choice was canceled a week before the cruise, and then our second choice was canceled the night before we docked. At that point the only remaining options were not desirable at all, so we elected to spend the day exploring the shopping district of St. Maarten only to discover that it was a national holiday (St. Maarten’s Day) and all of the stores were closed. We were hard pressed to even find a restaurant for lunch. I feel that RC should do a better job of offering more reliable shore excursions.

Finally, the internet offered on the ship is grossly substandard and RC should be ashamed to charge money for it. They bill it as the “fastest internet at sea.” In another place I read that it rivals the speeds of home internet. I initially had the Surf package. I was only able to achieve download speeds of less than 1 mbps and uploads that were too low to register. Needless to say, this was too slow for many websites to even load before timing out. When I complained they upgraded me to the “Surf and Stream” package where I was rewarded with download speeds of less than 2 mbps. Fast enough to surf, but videos froze up and buffered when trying to stream. I feel that charging for this service is a ripoff and detracts from Royal Caribbean’s brand. I do not recommend wasting your money on it.

In short, this was an excellent week and we would consider sailing with Royal Caribbean again, though there are certainly some remaining cobwebs to be sorted as they ramp back up to full operations.
Read more
Sail Date: November 2021
Cabin Type: Balcony
Type of Trip:
Destination: Caribbean
Cabin
Dining
Service
Pools & Sundecks
Onboard Activities
Entertainment
Value
This review is the subjective opinion of a Tripadvisor member and not of Tripadvisor LLC. Tripadvisor performs checks on reviews.
Helpful
Share
Scroll below for other great reviews

Oasis of the Seas 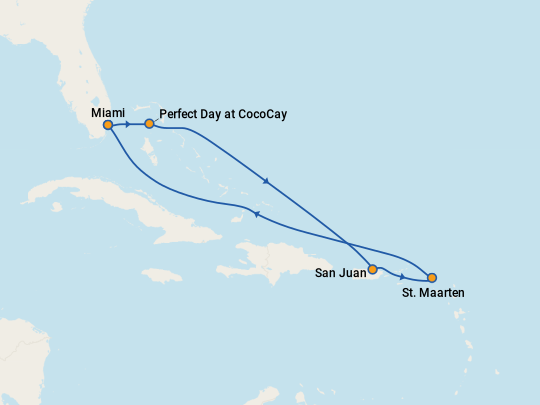