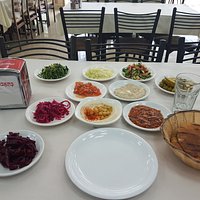 Kim G
Pacific Grove, CA3,135 contributions
Historic UNESCO Ruins Overlook Ancient & Future Battle Site on Jezreel Valley
Dec 2019
Also known as Tel (Hill) Megiddo, this UNESCO World Heritage Site is an historically significant ancient location of artifacts & ruins from various cultures, dating back from the Neolithic Period (7th-6th Century BC), through the Kings of Israel, and abandoned under the times of the Persians. Portions of the Canaanite City Gate remain from the Late Bronze Age as the visitor enters onto the Megiddo site, along a pathway winding up through sparse ruins. At the Northern Observation Point, a view overlooking the famous Jezreel Valley reveals the former battlefield below, where major battles occurred in the 15th Century BCE under Egyptian Pharaoh Thutmose III, later Alexander the Great and more recently in World War I (1918), General Edmund Allenby, who successfully fought the Ottoman Turkish forces here. Napoleon observed at Megiddo that: "All the armies of the world could maneuver their forces on this vast plain". Yes; this is the location of the final "Biblical Battle of Armageddon" and has numerous historic references within the Jewish "Tanakh" & the Christian "Bible". A former trade route that linked Egypt with Mesopotamia, this strategic site overlooks the key pass through the Carmel Mountains. This formerly fortified city used chariots for protection and its horses were sheltered in two stable complexes, whose foundations are now outlined. Most intriguing was our exploration through the protected water system and its tunnel, built under the period of the Israelite Kings, within the former walls of Megiddo. A 10 minute film prior to your tour explains the history of Megiddo and its archeological excavations. A visit to Megiddo is awe-inspiring and should not be missed!
Written 28 November 2020
This review is the subjective opinion of a Tripadvisor member and not of Tripadvisor LLC.

ChrisThomasTravels
Ossining, NY543 contributions
Doomsday
Dec 2019
You'd be hard pressed to find a more desolately beautiful view! Megiddo (AKA Armageddon, in ancient Greek) is an interesting site to be seen!
Written 15 November 2020
This review is the subjective opinion of a Tripadvisor member and not of Tripadvisor LLC.

ChrisJS51
Sevenoaks, UK503 contributions
Stupendous views and very evocative
Dec 2019
The town of Megiddo is on the edge of the Megiddo Valley, the site of the future Battle of Armageddon. What a view - a totally flat, bleak, sandy and rocky area below sea level. The park is on the edge.
Written 29 March 2020
This review is the subjective opinion of a Tripadvisor member and not of Tripadvisor LLC.

Jarred F
Haifa, Israel2 contributions
Amazing views of the Jezreel Valley and a historic location
Mar 2020
For christians the site of Armageddon, this park is very well maintained and is a pleasure to walk around. One can see thousands of years of history and the view of the valley and fields and nearby villages is picture worthy. It is a great hike for exercise as well!
Written 9 March 2020
This review is the subjective opinion of a Tripadvisor member and not of Tripadvisor LLC.

Steve D
Chesterton, IN345 contributions
Nice / some under construction
Mar 2020 • Couples
This is quite the site. It has one of the most spectacular views in Israel. They have a good film that helps introduce the history. You can spend some time here if you love history and especially Bible history.
Written 5 March 2020
This review is the subjective opinion of a Tripadvisor member and not of Tripadvisor LLC.

EastmeetsWestAB
London, UK1,141 contributions
Amazing Ruins.
Jan 2020 • Friends
Brilliant time in this park. Make sure you have a proper guide to take you here. It's worth listening to all the stories and relate to the book of revelations and how this location was chosen.

There are stables, altar, big silo, city gate, royal tomb etc. It is a pity we cannot see the water system due to flooding.
Written 24 January 2020
This review is the subjective opinion of a Tripadvisor member and not of Tripadvisor LLC.

Sarah C
Sydney, Australia3,586 contributions
Amazing site
Jan 2020 • Friends
Megiddo is an archaeological site (and UNESCO listed) to visit and there’s impressive remains (26 layers of occupation) to be seen, such as water shafts, stables and remains of palaces and fortifications. An amazing amount of remains to be seen of a site that was occupied in the Bronze and Iron Age. On site there’s bathrooms and a small gift shop, as well as plenty of parking. We’d recommend a tour here and it takes approximately 2 hours with a 27 shekel entrance fee + guide


Written 14 January 2020
This review is the subjective opinion of a Tripadvisor member and not of Tripadvisor LLC.

Donna Snow Pyle
26 contributions
Incredible site of ongoing archaeological digs
Nov 2019
You definitely need a car to get here and wear comfortable walking shoes as it is hilly. There is little, if any, shade, so wear sunscreen or a hat in summer. And bring water! To be able to see part of gate/wall that Solomon built was truly extraordinary. The view over the rolling hills of the Jezreel Valley where the End Times battle occurs is a panorama that sparks your imagination to run wild.

The extraordinary part of this visit was walking through the water tunnel system underneath the city. It's quite a steep set of stairs down and up, but well worth the hike.
Written 6 January 2020
This review is the subjective opinion of a Tripadvisor member and not of Tripadvisor LLC.

Nigel G
Guildford, UK37 contributions
Interesting historical site - worth a visit
Jun 2019
We only stopped here as it was en-route to Golan from Jerusalem, but glad we did. Perhaps the fact that it was a glorious day and there were few other visitors helped but it was a very pleasant and interesting site to walk around. It has been previously mentioned in reviews that there is little shade and I would agree, in the height of summer it could be tiring without water.

A map obtained from reception when purchasing tickets provides a route and gives detailed explanations of various places of interest, including the foundations of the oldest building constructed as a church ever found. The highlight for us came at the end of the walk, the water system. This is reached by descending steps to a tunnel which in turn ended up at a natural spring at the base of the hill. This was how water was obtained in the event of a siege – clever!
Written 27 December 2019
This review is the subjective opinion of a Tripadvisor member and not of Tripadvisor LLC.

TravelDonCA
California214 contributions
Look out over the Plain of Armageddon where the Final Battle Will Occur
Sep 2019
They have a good presentation to teach you about Megiddo. Then, climb the hill and see the ruins and previous attempts to uncover them (which failed in some cases). You look out upon the plain of Megiddo where the final battle of Armageddon will take place. You can also descend into the water system and come out the other end. There are some steps but it is easy to go through.
Written 10 December 2019
This review is the subjective opinion of a Tripadvisor member and not of Tripadvisor LLC.
2
…
31
Showing results 1-10 of 303

Richard G
Eugene, OR1 contribution
I visited the Tel Megiddo Nation Park on May 13, 2019 and purchased a DVD titled Megiddo Armageddon, 7000 years of History & when I returned home and played it I found that it is defective. Is it possible to get a replacement disc shipped to my home attention Richard Garoutte, 33400 Hampton Rd., Eugene, Oregon 97405, USA?

ElliottBerman
Jerusalem, Israel61 contributions
Worth a try but I do have my doubts. Better to try and fail than not to try Faint heart never won fair lady! You might hit pay dirt if your request reaches somebody who speaks good English and that might be the problem. My suggestion is try but not be aggressive.Infact if you tell them how much you enjoyed your visit and how the site had been developed and then that you wanted a momento from the trip and were so so disappointed when you found the disc defective. That might do it. Best of luck!
Read all replies

Sharon K
Sarasota, FL4 contributions
Is there public transportation to the park

Giora_I_L
Haifa, Israel6,128 contributions
There are buses from Nazareth, Afula and Haifa. For example line #302 by Superbus from Haifa Lev HaMifratz CBS.
Read all replies

David J
Minooka, IL55 contributions
From Tel Aviv Megiddo is about a two hour drive. Yes, you could stop at Caesarea by the Sea (Maritima) along the way. Maritima is an excellent site that takes you back to the first century and the amazing architecture of Herod the Great. You can also go to Mt. Carmel before or after you go to Megiddo. All three of these sites are "must see" in my opinion. Akko just north of Haifa is also an interesting site, especially if you stay overnight in Haifa.
Read all replies

joaobraga2018
Vila Velha, ES5 contributions
what is the value of the ticket? is it possible by at the entrance?

Su D
London, UK20 contributions
How long do you need to look round migaddo what are the opening times and costs on a Monday

Tal122
Tel Aviv, Israel115 contributions
A visit would take up to 90 minutes. Cost: 28 NIS (about $8) Hours on a Monday: 8-5 in summer, 8-4 winter. Last admission is an hour before closing time/ Note: the water tunnel (the highlight of the visit) closes 30 minutes before closing time
Read all replies

Rachel M
Modiin, Israel1 contribution
Is the national park open during this season?

ESLABORN
Santander, Spain37 contributions
Can I visit single? or Must be a part of group
Megiddo is easily accessable from both Tel Aviv and Haifa. There is no problem whatsoever to visit it alone, if you go to the museam first, and get a right impression what you are going to sea further. This done, you may enjoy your visit!
Read all replies

Lu R
19 contributions
Are there guides on site available for hire?

lone6star
New Jersey311 contributions
No guides, but many people come here as part of a group tour. Perhaps contact one of the Tour companies to see if you can tag along.
Read all replies 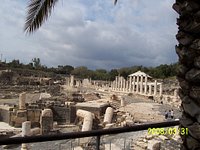 Skyscape049
Sierra Vista, AZ101 contributions
What are the closest restaurants by Megiddo Park?

David J
Minooka, IL55 contributions
Yes, there is a good restaurant at Megiddo, and they have an excellent selection of food, especially shwarmas and falafels.
Read all replies
View all
Also popular with travellers
See all
Anything missing or inaccurate?
Suggest edits to improve what we show.
Improve this listing
Frequently Asked Questions about Megiddo National Park