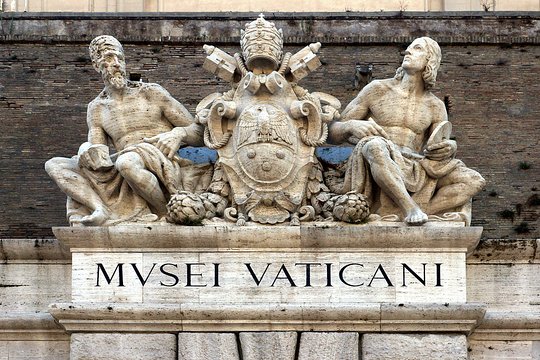 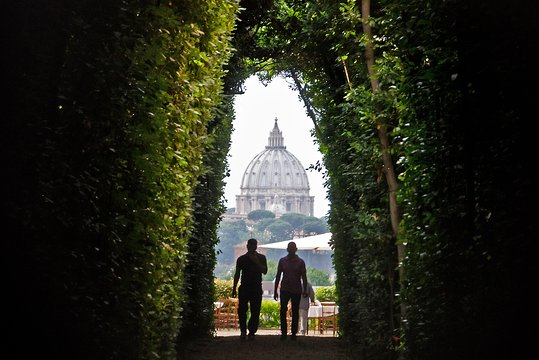 Select Date and Travellers
From
US$67.39
Date
2 travellers
Options
Select tour language
Free Cancellation up to 24 hours in advance
Low Price GuaranteeNo Booking Fees
Overview
Highlights
What to Expect
Choose between a morning or afternoon tour, climb aboard an air-conditioned coach near Rome's Termini station. Travel through the streets of the Eternal City, take in the views and hear fascinating commentary from your local guide. Pass through the Piazza del Popolo, cross the Tiber River, and spot the imposing Castel Sant' Angelo.

Alight from your coach and skip the line at the Vatican Museums, home to some of the world's most renowned and recognizable artworks. Follow your guide down Guiseppe Momo's bronze spiral staircase to learn about the Flemish tapestries that grace the walls and about how they were based on paintings by students of Raphael, the Renaissance-era painter whose wall frescos of angels and cherubs are also in the museum. Then, head to the Sistine Chapel and admire Michelangelo's famed fresco.

Next, follow on to St. Peter's Basilica to see another Michelangelo masterpiece: his amazing sculpture of La Pieta and discover the history of the church from your guide and hear little-known stories about the building and its construction.

Alternatively, upgrade to a full-day tour which combines the morning with a walking tour of Christian Rome in the afternoon.

Meet the guide and get ready for an engaging tour of Rome, seeing the most legendary Christian landmarks in this city. Stroll around Esquiline Hill, one of the city's famed seven hills, and home to the Basilica of Santa Maria Maggiore, a massive church. Then head over to San Giovanni in Laterano, or St. John Lateran, a basilica that is the official church of the pope. Next door take a moment to see the Holy Steps, supposedly the staircase that was part of Pontius Pilate's palace in Jerusalem, which Christ would have walked on for his trial. Today pilgrims ascend the 28 steps on their knees, saying a prayer for each step.

At the top of the steps in the Sancta Sanctorum, or Holy of Holies, a room that was once a depository for some of the holiest relics in Christendom. Objects included the heads of Sts. Peter and Paul, a chunk of wood from the table where the Last Supper was eaten, and the Holy Foreskin, the prepuce of Jesus, which was stolen in 1527 by a marauding German soldier in the Sack of Rome. (It ended up in the medieval hill town of Calcata, just north of the city.)

Later head to the Appian Way, an ancient Roman road to visit some important early Christian churches, including the Chapel of Domine Quo Vadis, which boasts a cemented imprint of the ghost of Christ. Also visit some of the catacombs, burial grounds of the early Christian community. After exploring underground, visit the old spa ruins at the Baths of Caracalla, and then finish your tour with a hotel drop-off or a drop-off in town.
Show More
Important Information
Departure Point
Via Giovanni Amendola, 32, 00185 Roma RM, Italy
Duration
9h
Return Details
Returns to original departure point
Inclusions
Exclusions
Show More
Additional Info
Cancellation Policy
For a full refund, cancel at least 24 hours in advance of the start date of the experience.
1,074Reviews1Q&A

Write a review
Traveller rating
Traveller type
Time of year
Language
Selected filters
Popular mentions
Diane F wrote a review Nov 2019
4 contributions
Skip the line
Truly skipping the line is a time saving event. Able to spend time looking around. Guide was very knowledgeable about location.
Read more
Date of experience: October 2019
Helpful
Share
angielou141 wrote a review Oct 2019
Chicago, Illinois25 contributions
Very Informative
We spent the morning with Paola learning so much history and seeing many paintings and sculptures. She was very knowledgeable, and pleasant. We did the full day with lunch. The lunch was okay. They were accommodating since I don't eat beef or pork. So I had the chicken as my…
Read more
Helpful
Share
Response from greenlinetours, Responsabile relazioni con la clientela at Skip the Line to Vatican Treasures, Sistine Chapel and Optional Upgrade with Lunch
Responded 16 Oct 2019
Hello angielou141, Thank you for taking the time to provide us with a review of your experience. We appreciate your positive feedback about your experience. We are sorry but our tours did not include a stop at Appian way but the only panoramic view from the bus. We take pride in serving our customers and hope to see you again soon! Green Line Tours staff
Read more
Meghan OKeefe wrote a review Oct 2019
Redondo Beach, California3 contributions1 helpful vote
Valentina is amazing!!
I only bought the skip the line tickets, not the tour, of the Vatican and Sistine Chapel, however, after meeting Valentina, I wish I would have paid for the tour with her. Valentina assisted my mom and I by holding our hands through the busy Rome street traffic all the way to…
Read more
Date of experience: September 2019
Helpful
Share
Philip P wrote a review Sep 2019
Lindenhurst, Illinois14 contributions
Vatican Tour
This tour was fine in the beginning but ended in terrible manner. The first issue was the tour guide’s ability to communicate was hampered by an Italian accent that was hard to understand. This lead to communication issue at the end. The tour guide said we had 20 minutes to…
Read more
Date of experience: September 2019
Helpful
Share
Chicago Traveler wrote a review Aug 2019
1 contribution
Green Line tour of Vatican - WORST EVER. AVOID IT.
I normally love tour guides at museums but my experience with Green Line Tours at the Vatican in July, 2019 was the worst. In fairness it is overly crowded this time of year, but this tour makes a bad situation worse. First, avoid bilingual tours. Ours was Spanish and English…
Read more
Date of experience: July 2019
Helpful
Share
PreviousNext
123
Key Details
Why Book on TripAdvisor?
Travellers Also Viewed
Likely To Sell Out
Vatican Small Group Tour
from US$112.32*
Skip-The-Line Vatican Museum, Sistine...
1 Review
from US$102.21*
Private Transfer from Rome City...
from US$31.72*
Rome Highlights by Segway
6 Reviews
from US$67.39*
Frequently bought together
Faster Than Skip-the-Line: Vatican...
24,449 Reviews
from US$68.52*
Skip the Line:Before Opening...
864 Reviews
from US$62.90*
Pompeii Ruins & Mt Vesuvius Volcano...
4,385 Reviews
from US$133.66*
Skip the Line Vatican Tour Vatican...
688 Reviews
from US$69.58*
Walking Tours(2808)
See all
Faster Than Skip-the-Line: Vatican...
24,449 Reviews
from US$68.52*
Likely To Sell Out
Skip the Line: Colosseum Small Group...
12,561 Reviews
from US$22.46*
Guided Small Group Skip The Line...
33 Reviews
from US$67.39*
Private Vatican Museums Tour with...
448 Reviews
from US$182.52*
Shop Tickets And Tours(4999)
Shop Now
Day Trips & Excursions
Food, Wine & Nightlife
Tours & Sightseeing
Sightseeing Tickets & Passes
Cultural & Theme Tours
Transfers & Ground Transport