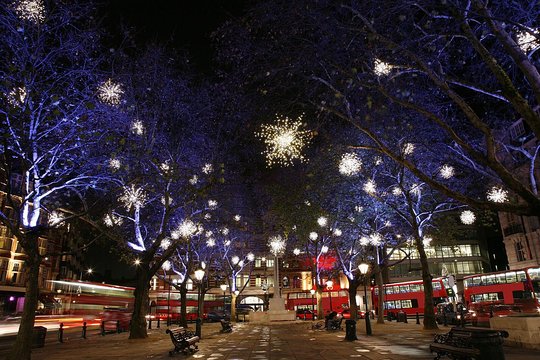 This product is unavailable to book via Tripadvisor. Contact the supplier for availability.
From
US$19.54
Free Cancellation up to 24 hours in advance
Low Price GuaranteeNo Booking Fees
Overview
Enjoy the beautiful Christmas lights of London travelling on a restored 50-year-old Vintage bus! This festive tour features a live commentary from your tour guide and travel through the city which is lit up by Christmas lights.  This includes Oxford Street, Regent Street, Knightsbridge, London-Eye and the famous Christmas tree at Trafalgar Square.  Tour departs at 4pm and 7pm daily lasting up to 2.5 hours and you can alight at Winter Wonderland (Hyde Park Corner) to enjoy the rest of the evening at the park!
What to Expect
Itinerary
This is a typical itinerary for this product

See the best view of London Eye in lights from here

See a major shopping street in the West End

You can alight here for the Winter Wonderland

You can alight here to enjoy the rest of the evening!

London townhouse of the Dukes of Wellington. Address 1 London!

Write a review
Traveller rating
Traveller type
Time of year
Language
Selected filters
Popular mentions
everettw wrote a review 1 Jan
Tallahassee, Florida12 contributions2 helpful votes
Disappointing tour
This was our most disappointing tour on our trip to London. The tour guide Clyde was very low-energy and didn't engage with us or the other people on the tour either. Plus due to the bad sound system, we could barely hear him when he did mention points of interest. We did get a…
Read more
Date of experience: December 2019
1 Helpful vote
Helpful
Share
carol l wrote a review Dec 2019
Hertford, United Kingdom18 contributions5 helpful votes
London Christmas light tour- premium tours limited
Seven of us went on this tour and it was good fun. The tour guide Adam was very informative with a great sense of humour (which think got lost on the tourists) but it made our trip. Our driver Jermaine was good too. The only negative thing was we had to pay adult fare for two…
Read more
Date of experience: December 2019
Helpful
Share
BekiMoose wrote a review Dec 2019
Gosport, United Kingdom11 contributions1 helpful vote
London Christmas Light Tour
We had a great ride around London getting a spectacular view of the Christmas lights. The tour covered all the big sites - Harrods, Oxford Street, Regent Street, The London Eye - without having to fight through the crowds. The driver was amazing guiding us smoothly through the…
Read more
Date of experience: December 2019
Helpful
Share
Susan M wrote a review Dec 2019
1 contribution
Christmas light tour
Great tour of the lights... it was fun... we had a fantastic time. The lights were fantastic. The bus took us around with a good commentary. Saw all the big streets and there lights.
Read more
Date of experience: December 2019
Helpful
Share
Martin G wrote a review Dec 2019
2 contributions
Mr gravett
Excellent commentary very good.well worth it. Even though it was raining at the start of the tour.Harrods was over welming with excellent widow displays.
Read more
Date of experience: December 2019
Helpful
Share
PreviousNext
12345
About the operator
By: Premium Tours - London Tours
6,265 reviews
Certificate of Excellence

Matthew12-23-91
21
Welcome to London Tour.
My uncle and I were in London for a week and this tour was easily the best part of it. Our tour Guide Ben was…
Read more

antonksyy
10
Super friendly
I loved my guides on this trip! I travel solo a lot and they’re knowledgeable and make the driving part of the…
Read more

elizabethmV2573IH
Ontario, New York
10
Stress free trip to Windsor, Stonehenge and Bath.
We truly enjoyed our bus trip today. Our guide Carol and our f]driver Abdul were fantastic. It was great to travel…
Read more

712hectors
10
Wonderful!.
We have no complains at all. Everything worked perfectly. We really enjoyed the whole experience. And of course,…
Read more

756dereks
44
Day trip
Visited the vintage buses, there for hours to realise it weren't a bus station, I will go again because I know…
Read more

N5613HWlaurar
20
Great tour!
This was a great tour which highlighted many of the major sight sin London. We met at 7:45 AM and it ended at 4pm…
Read more

TenerifeMike62
10
Great tour and wonderful way to see major sites in a day
Our tour guide, Rick, was terrific. He was knowledgable, enthusiastic and kept a day long tour interesting every…
Read more 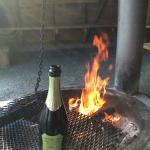 steve t
Bangor, United Kingdom
53
Paris!
We had a fantastic time on this trip-Anna our guide was wonderful,and Frederick the driver drove us safely around…
Read more

654kathrynr
Toronto, Canada
23
Terrible and very Rude Customer Service From Premium Tours
If I could rate 0 circles, I would. While the Harry Potter Tour at Warner Brother's Studios in London is amazing…
Read more

alelopezdea
4813
Great tour!!
This was a great tour as it gave enough time to see both Stonehenge and Bath. I has seen other tours with…
Read more 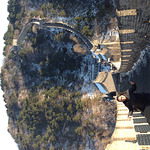 Benaelkci
Gold Coast, Australia
33
Well worth it🙂
Highly recommend this tour, best way to see Stonehenge. You do not need a guide as everything is straightforward…
Read more