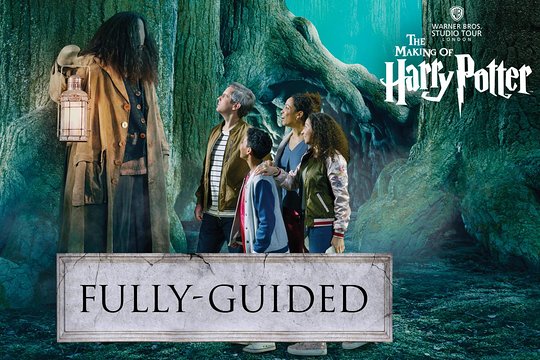 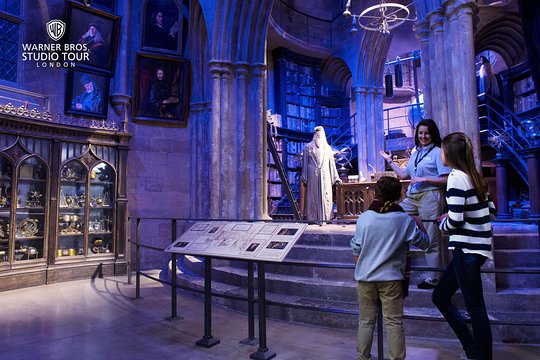 Select Date and Travellers
From
US$166.22
Date
2 travellers
Options
Free Cancellation up to 3 days in advance
Low Price GuaranteeNo Booking Fees
Overview
Go behind the scenes of the Harry Potter movies at the Warner Bros. Studio Tour London – The Making of Harry Potter. Accompanied by a guide, you'll explore the studios for three hours to see costumes, props, and sets from all of the beloved movies. Peek inside Dumbledore's office, stroll down Diagon Alley, and much more. Round-trip train travel from London is included.
Itinerary
+
–
You'll start at
Euston War Memorial
190 Euston Rd, London NW1 2EF, UKMeet at Euston War Memorial outside Euston station. The Euston War Memorial is a stone obelisk with 4 soldier statues at the base, located by the Euston Square gardens, outside the station on the Euston road side, close to the bus stops and taxi rank.
See address & details
You'll end at
London
London, UK
See address & details
Highlights
What to Expect
Depending on the timed entry slot chosen at checkout, you’ll be greeted by your guide at a designated meeting point in central London and travel to Warner Bros. Studio London by train. On arrival, you’ll be greeted by a studio guide for a behind-the-scenes tour of the studio. Watch a short film in the cinema before you enter the Great Hall and discover a plethora of production secrets from your guide. Peek inside Dumbledore’s office; marvel at the shop fronts of Flourish and Botts, and Weasley’s Wizard Wheezes in Diagon Alley; and re-create the famous scene on Platform 9 3/4 beside the Hogwart’s Express.
Show More
Important Information
Departure Point
Euston War Memorial, 190 Euston Rd, London NW1 2EF, UK
Duration
5h
Return Details
London, UK
Inclusions
Exclusions
Show More
Additional Info
Cancellation Policy
If you cancel at least 3 days in advance of the scheduled departure, there is no cancellation fee. If you cancel within 2 days of the scheduled departure, there is a 100 percent cancellation fee.
301Reviews29Q&A

Thefourbatemans
Layton, Utah
113
Favorite Thing We Did
Our guide was fantastic! This was our favorite part of our trip to the UK. We were able to see everything so close…
Read more

Molly Y
Golden, Colorado
43
Lovely! Wealth of info for your HP nerd.
Finding the meeting point, getting on the train, bus, and to the studio was easy. The guide who meets you at the…
Read more

Jill L
Tuscaloosa, Alabama
11
Perfect way to kick off visiting the War Rooms!
Rob was great. He was very knowledgeable as well as entertaining- the perfect mix of history and humor. The…
Read more

damaya19
32
Great Time at the Changing of the Guard Tour
This changing of the guard tour was really awesome! Our tour guide was very nice and they provided a radio and…
Read more

nicoleyi
Paris, France
31
Informative, fun, and amazing tour! A must do in London!
We could not have been happier with the tour and especially our tour guide, Frances. He was extremely…
Read more

Jason
11
Fantastic, Comprehensive tour
Not sure what I expected going in, but I basically assumed we would be standing at the gates of the palace and…
Read more

madh0ff
Cairns Region, Australia
368
Amazing tour
Decided to do this tour before venturing inside Buckingham Palace as we wanted to see the changing the the guards.…
Read more

Cathy77777
Laguna Niguel, California
33
Harry Potter Tour
Absolutely fabulous tour and tour guide - a must for every Harry Potter movie buff! I will go back, for sure! We…
Read more

Ingrid M
11
Epic
My 9 year daughter describes the day as epic. On the one hand, given the Aussie exchange rate, hideously…
Read more